We received a good bout of it this week.  Korea has the coldest climate at this latitude because of Siberian winds.  Anyone who has lived here during a winter doesn’t need that information.  It gets COLD.  The wind bites.  It doesn’t help that many Koreans insist on opening windows to clean out the air–something that doesn’t make sense in polluted Seoul.

This year I’m determined to face winter head on and enjoy it.  There are some foods that are at their peak in winter.  Other foods just taste better during this time.  Here are the ten that we’re looking forward to at ZenKimchi. 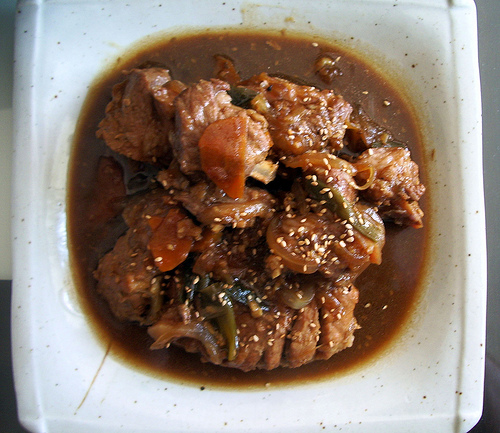 It’s one of the heartiest coziest foods in east Asia.  Slowly braised ribs with potatoes and chunky carrots.  I rarely get tired of this.  There’s the classic version and a spicy version that you can find in some restaurants.  It’s a heavy dish that sticks to the–you know. 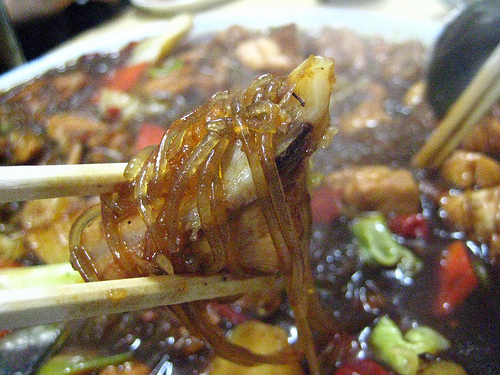 Joining Galbi Jjim is another braised lovely, this one from Andong.  Instead of ribs we have manly chunks of chicken, sweet potatoes, peppers and sweet potato noodles in a thick brown sauce.  It’s rumored that the secret to Andong’s best Jjim Dalk is Coca-Cola.  EJ and I made the mistake of eating Jjim Dalk in August.  We couldn’t get through three bites.  It’s made for cold weather, breaking the old notion of getting hungry thirty minutes after eating an Asian meal.

This one is purely EJ.  I’m not a fan of juk other than the pumpkin one.  But I can appreciate its warming qualities on a chilly morning, kind of like oatmeal or Cream of Wheat.  The preparation for this rice porridge is actually a little similar to risotto in that the rice kernels are toasted first before adding liquid so that they absorb faster.  This red bean version is traditionally eaten during Dongjinal, which is December 22nd.  The mythology is that it keeps away bad spirits, who hate red beans. 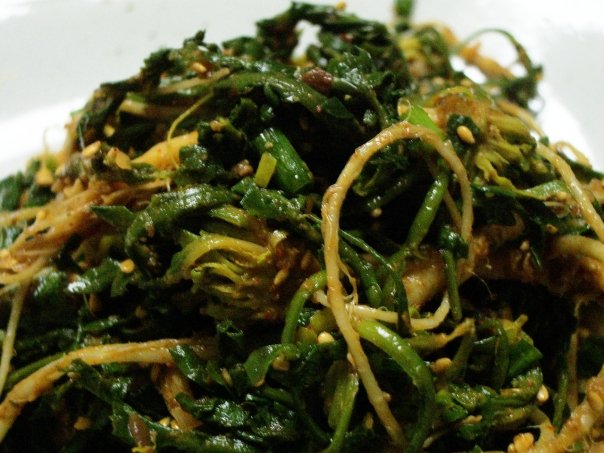 Technically it’s associated with spring the same way that Naengmyeon is associated with winter.  But who eats cold noodles in winter anymore?  Naengi, a little weed known as Shepherd’s Purse in English, is already showing up at the supermarket and has a smoky woodsy flavor that reminds me of my grandfather’s fireplace.  How could this not be a winter food? 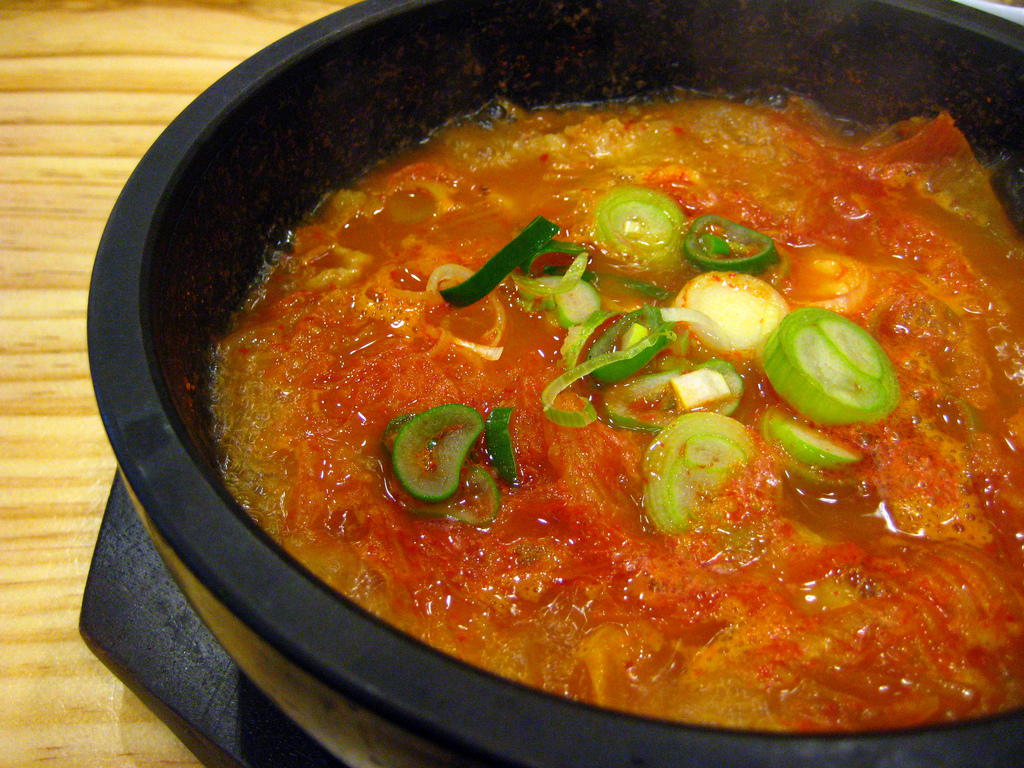 Naengi also goes well in Kimchi Jjigae.  Since moving to Korea, this has become one of my top comfort foods, in competition with green beans, mashed potatoes, and macaroni and cheese.  It helps me brave the stinging wind and slippery hills when I know a steaming bowl of Kimchi Jjigae with thick chunks of pork and rustic tofu is waiting for me at home.

Street food exists all year round, but the best comes out in the winter, mainly HoDdeok 호떡 and BungeoBbang 붕어빵.  The first is dough stuffed with brown sugar and nuts that’s fried in oil a few centimeters deep, crisping the outside and turning the inside into sweet lava.  I mostly buy them to keep my hands warm.  BungeoBbang is batter poured into fish-shaped molds, filled with sweetened red beans or, my favorite, “choux cream.” The choux cream looks more like a yellow custard, but who cares?  It’s crispy on the outside like a waffle and custardy on the inside.  And speaking of waffles, let’s not forget waffle pies, Deli Manjoo, Hot Bar, Odeng with a dixie cup of broth, Egg Bread, Sundae mixed with Ddeokbokki sauce and just the jovial atmosphere of a steamy pojang macha tent.

If you’re feeling under the weather, Galbi Tang will cure what ails you.  I’m lumping all the white beef stock soups together in this one, including SeolleongTang 설렁탕, the cow head soup, the oxtail one and Lunar New Year’s DdeokGuk 떡국.  They’re smooth and a little bland, the only flavorings being salt and black pepper, which you add yourself as they steam up your glasses and warm your blast chilled nose.  Best accompanied by… 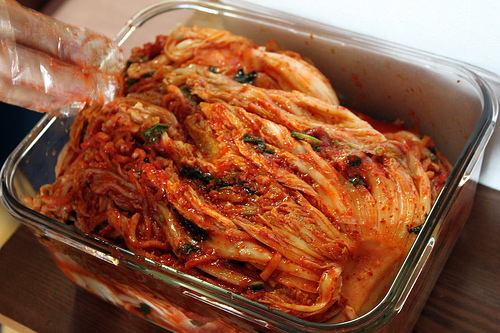 It’s not just an item in World of Warcraft.  Winter kimchi is good not because it’s fresh out of November’s kimjang kimchi making season.  Cabbages and all leafy greens have higher sugar contents in the winter.  Southerners know this is true of collard greens.  Fresh winter kimchi is fruity, crispy and, if done right, gives a hint of the ocean in the finish.  This is when kimchi is just not understood until one eats it in Korea. 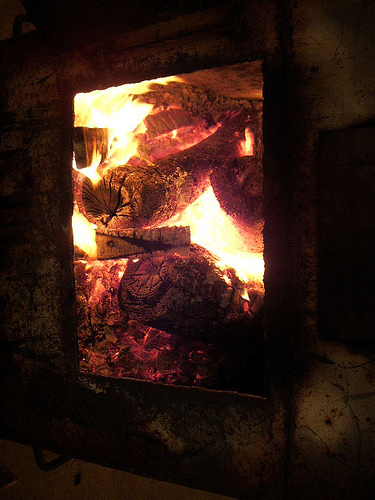 You can get these as street food, but I set these apart because you can get them in country restaurants.  It’s a very country peasant dish.  You may notice that the street food versions are usually set up by the same people who pick up cardboard from the street.  There’s one galbi restaurant near my old place in Ansan that had a wood burning stove in the center futilely trying to heat a dirt floor restaurant that’s designed to be open air.  They kept sweet potatoes under the coals, and the waitstaff would retrieve a few for us.  Eaten with kimchi on top is so-o-o country (according to EJ) but feels so right. 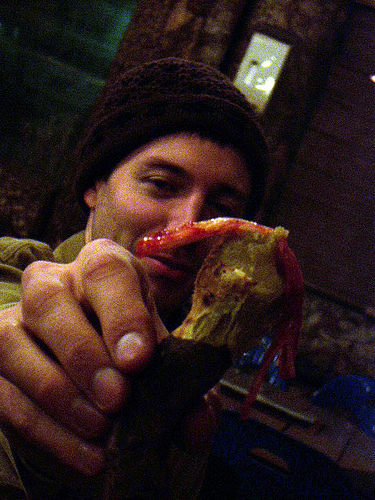 And now, the number one reason I look forward to winter in Korea…

The oysters don’t show up until late October.  They’re not as large as they are back home on the Gulf coast, but they are brinier and cheaper.  I love getting them in my kimchi, as side dishes, in bossam.  I make my own luxury moments by cooking them in lots of butter, onions, white wine and milk, going at them with the stick blender and basically making a oyster bisque.  Best with Zec crackers.  Grilled shellfish restaurants are also a treat during the cold months because most of the shellfish are at their sweet succulent prime.

Korea gets the cold without the snow to make it feel justified.  But it does get the food to make the season much more bearable.  Remember that the chilliness outside makes the warmth inside all the more cozier.

16 thoughts on “10 Ways to Survive a Korean Winter”