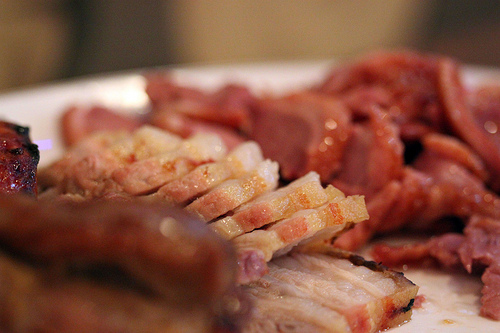 I had my 36th birthday a couple of weeks ago. To help cope with the shock, EJ asked me where I wanted to eat for dinner. This is usually my chance to eat some non-Korean food–but really, I couldn’t think of any non-Korean food that I really wanted. I actually had smoked duck on the brain. EJ was thinking of smoked ribs.

Okay. Let’s find a place in Anyang that does both.

For those who have access to the lovely city of Anyang, the place is called Ganghan Namja Jang Jak Gui 강한 남자 장작 구이. It’s located beyond Hagwon-ga, past the park and right when you get to a clump of apartment buildings. Go to the villas across the street, and it’s there.

It was late afternoon on a drizzly afternoon. We were the first dinner customers, but not for long. The place got super packed to the point that there was a wait. In the rear of the dining room was the smoker, shaped like a choo-choo train. 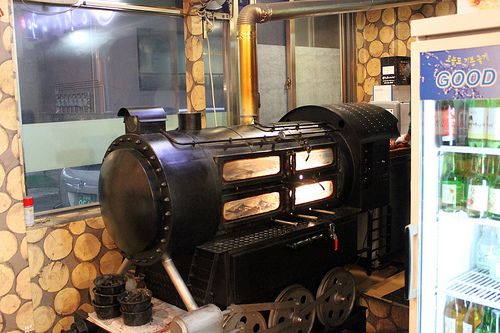 Choo-choo train smoker means loads of fun and good meats on the way! 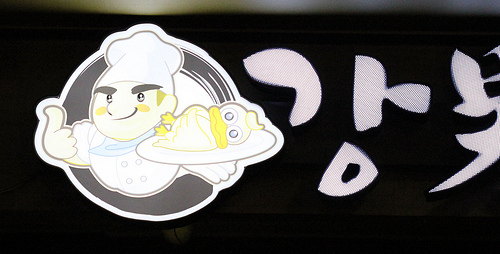 And disturbing cartoon logo also is a good sign.

Looking at the menu, we just decided to get everything, the modeum barbecue sampler. It was for four people, but we agreed that we could pack the rest for tomorrow’s breakfast. I don’t remember the exact price, but it was pretty reasonable for what we got. 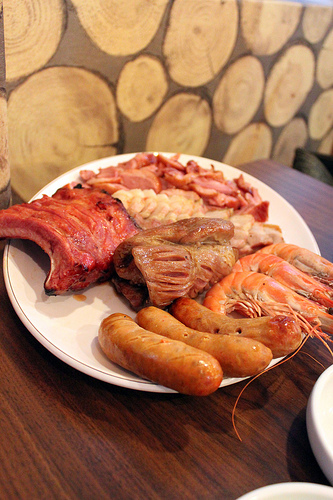 Lessee… starting from the left and going clockwise, we gots some big fat Deung Galbi pork ribs, then some sliced Samgyeopsal pork belly, that’s the smoked duck in the back, some shrimpy boys, juicy awesome smoked sausages, and a traditional Korean marinated short rib pork Galbi.

It’s already smoked and ready to eat, but how about throwing a little more fire on there? 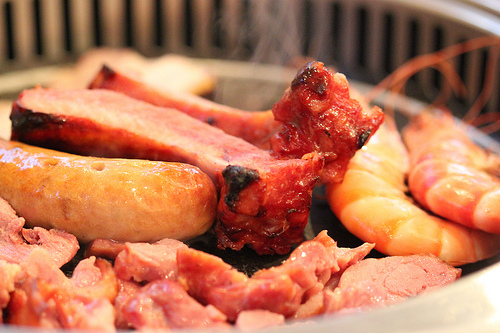 Cook that protein over more charcoals to crisp up the edges and add a little quick jolt of smoke. That’s Korean style. 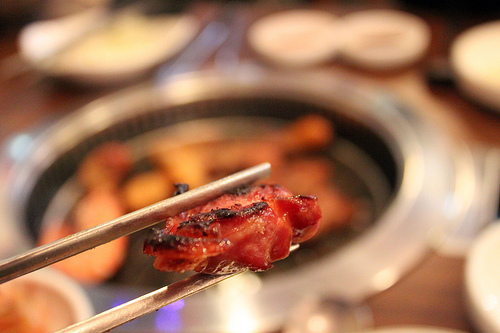 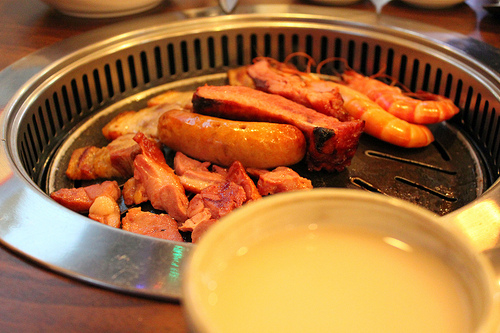 And with good country Korean cookin’, you need the country liquor of choice, makgeolli. Actually, it turned out that the owner of this place is a makgeolli distributor, and he gave us a bottle of his own brand.

And yes, Mom, I ate my vegetables. 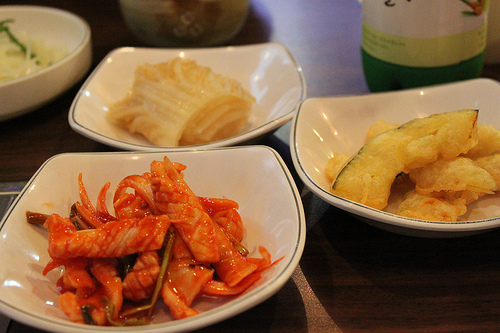 That white kimchi in the back was divine. But I was really addicted to the tempura on the right, especially the deep fried pumpkin squash. 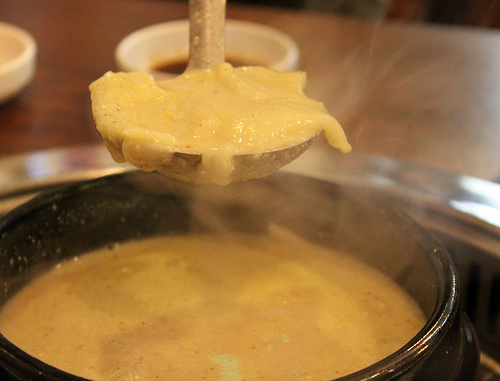 After we had our fill, they gave us a bowl of Wild Sesame Sujebi, rustic dumplings in an insanely earthy and filling soup.

EJ’s birthday was today. I asked her what she wanted for her birthday dinner. Being the good Korean girl she is, she wanted MiyeokGuk (Kelp Soup), the traditional birthday choice. But part of me was really hoping she’d give me a call in the middle of the day saying, “Oh, I changed my mind. I want some of that BBQ again.”

Because I certainly do.