I ain’t gonna be gentle about it. Korea has some fucked up pizzas. The American-based chains are the worst offenders, trying to outdo each other in how outrageously disgusting their next pizza will be. I think they’re doing some high stakes trolling competition with each other.

“What can we trick Koreans into eating before even they will say, ‘That’s gross, man’?”

Thanks to Max on the Pizza Lovers Seoul group, we know of this new creation (as in, Frankenstein’s monster is a creation). This is supposedly the Brazilian themed “Churrasco Cheese Roll Pizza.” Brazil does have some popular cheese rolls, pão de queijo, so it’s not as culturally random as VIPS’ UK promotion.

What’s culturally random is putting all this crap together. It’s like topping a pizza with Real Charcoal Barbequed Samgyeopsal, tossing on some kimchi and garlic, mixing some doengjang into the cheese and gochujang into the sauce, then rounding it out by ringing the pizza with hoddeok.

Their logic is that they’ve taken a skewer from a Churrascaria and put it on a pizza. It has steak (okay, not bad) with “snow cheese,” which is a shredded combination of mozzarella, cheddar, and gouda. I doubt none of that isn’t processed. It looks like it’s growing hair and needs a Brazilian wax as well. And they have sundried tomatoes. Not a bad topping on its own. Also, not AT ALL BRAZILIAN!!!

To be sure, I Googled “Brazilian cuisine” and “sun-dried tomatoes,” and it gave me this.

Honestly, the basic toppings don’t sound so bad. Ah, but then I see the Where’s Waldo of Korean pizza toppings–canned corn. It’s in every crowd on every crowded Korean pizza. And I bet there’s a sweet element as well because foreign food in Korea has to be turned into candy for children. I see a sweet chili sauce being offered with the standard garlic sauce. 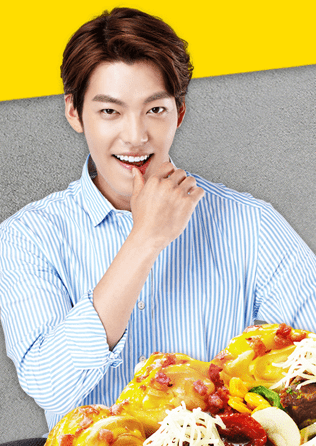 “That makes me want to wipe the unicorn blood from my lips with my thumb.”

All this for as low as

And people were complaining that Brick Oven New York’s pizzas were pricey. At least BONY’s pizzas don’t look like a cat coughed up its dinner and a few furballs on a plate.