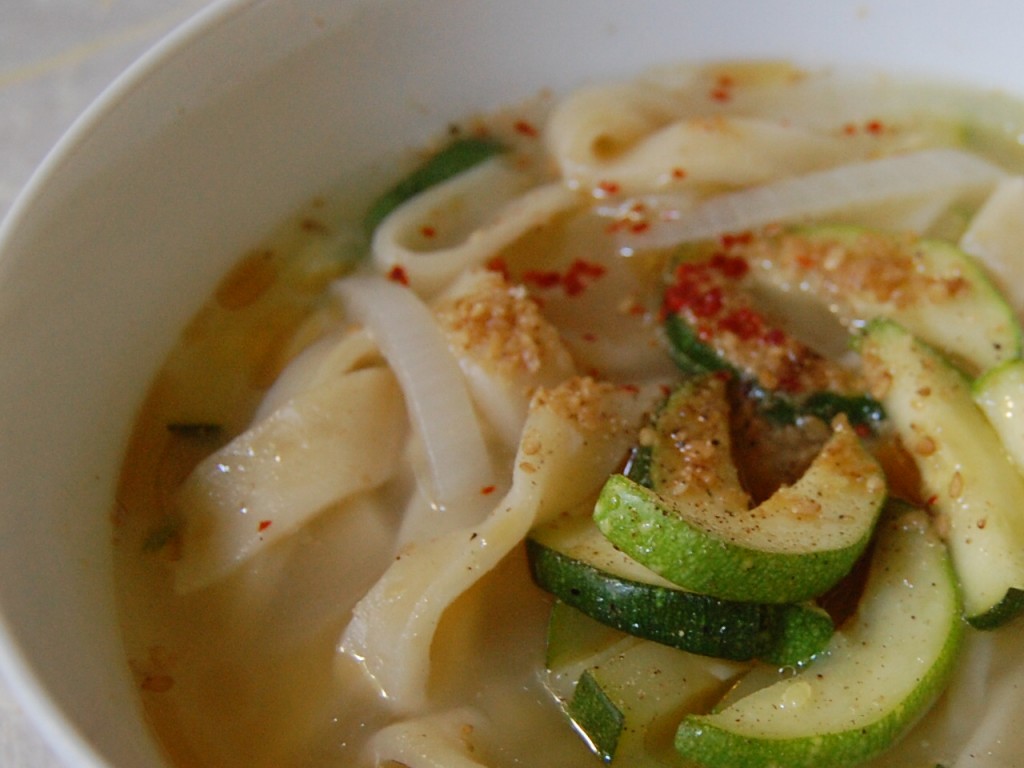 You may be wondering about this hot noodle soup post in the middle of this hot, sticky summer.  Some of you may be familiar with the seemingly odd Korean custom of eating hot food in the summer and cold food in the winter time.  This custom is based on the widely known concept ‘yi yeol chi yeol’ (이열치열; 以熱治熱) in Korea, which literally means ‘to relieve heat with heat.’  The application of this concept in food is closely related to the traditional Korean medicine, but let’s not get too technical.

Simply put, during the summer, people tend to sweat a lot and consume a lot of cold foods and drinks, all of which are considered to cause depletion of yang energy.  By eating hot food, we restore warmth and bring back the balance in our bodies.  These foods, also usually high in protein, are referred in general as bo yang shik (보양식) which has the meaning of ‘food that restores yang energy,’ or restores health.  This is the big reason behind the custom of eating samgyetang (chicken soup with traditional medicinal herbs including ginseng) on three ‘boknal’ (복날) in Korea, marking the hottest times of the year in the lunar calendar.

So I hope it is now more understandable that kalguksu (칼국수; hot noodle soup) is considered a summer dish.  Kalguksu literally means ‘knife noodles,’ referring to how the noodles are made by cutting with a knife rather than extruded or spun.  A basic kalguksu has onion slices plus simple, yet seasonal ingredeints of potato and zucchini slices in addition to the wheat flour noodles.  As is often the case with Korean food, diners usually season their own soups with a sauce made with soy sauce, sesame oil and chopped scallions.  The most popular varieties include dalk kalguksu (닭 칼국수; chicken noodle soup) and haemul kalguksu (해물 칼국수; seafood noodle soup), among many other varieties depending on feature ingredients.

It is also an easy dish you can make to reward yourself for laboring to make chicken stock.  Bring some of the chicken stock to a boil, add onion, potato, zucchini slices, shredded chicken meat and kalguksu noodles (ready-to-cook packages are available in Korean markets), bring up to a boil until noodles are done.  Garnish with chopped scallions, toasted sesame seeds, and season with soy sauce, sesame oil and chili flakes.

If you want to take it one step further, you can take time to make kalguksu noodles at home while chicken stock is still on the stove.  It doesn’t take much time to make the noodles, and to me, it’s always worthwhile to make it at home.

To make kalguksu for two

Mix 1 cup of all-purpose flour, 1/3 cup of cold water, 1/4 teaspoon of salt, and 1 Tablespoon of oil to form a dough and knead for 10 minutes.  The dough may look a bit dry in the beginning, but knead for 3 minutes before deciding to add more water.  In case you add water, just wet your hands and go back to kneading – little goes a long way at this point.  Wrap in plastic and let it rest for 30 minutes.

On a clean, floured surface, roll out the dough with a roller to a thin sheet.  Fold and cut with a knife.  Make sure to flour your hands and the surface as necessary as you roll out the dough and cut to noodle strands.  Flour the cut noodles to keep each strand separated.

Zucchini can be added to the stock to flavor the noodle soup broth, but it can also be a garnish on top, which adds a bite to the dish as well as its bright green color.  Rinse one zucchini, then cut to strips.  Reserve 1/2 of it to add to the broth for later.

Lightly rub the other half of the zucchini strips in 2 ts of sea salt and let it rest for 20-30 minutes.  The zucchini will wilt a bit, and you will see water extracted from zucchini.  Rinse in cold water, drain then press lightly with a paper towel to get excess moisture out.  Sauté lightly in oil to cook the zucchini and get the color brightened.

Mix 1/2 TBSP of soy sauce, 1/2 TBSP of sesame oil, 1 stem of finely chopped scallion, 1/4 ts of fresh grated ginger, 1/4 ts of gochugaru (고추가루; Korean chili flakes) and 1/4 ts of toasted sesame seeds.  You can also grate a clove of garlic and mix in the sauce.

Bring 4 cups of chicken stock to a boil.  Add 1/2 of a sliced onion, 1/2 of a peeled, sliced potato, 1/2 of a zucchini cut to strips, and 1/2 cup of the shredded chicken breast meat.  Shake off excess flour from the noodles and add to the pot.  Stir to make sure the noodles are not stuck together.  Bring up to a boil.  When the noodles are cooked, remove from heat.

Top the soup with sautéed zucchini and season with the sauce.  Enjoy!

Don’t forget the giblet bag in the refrigerator – we’ll get to that next!