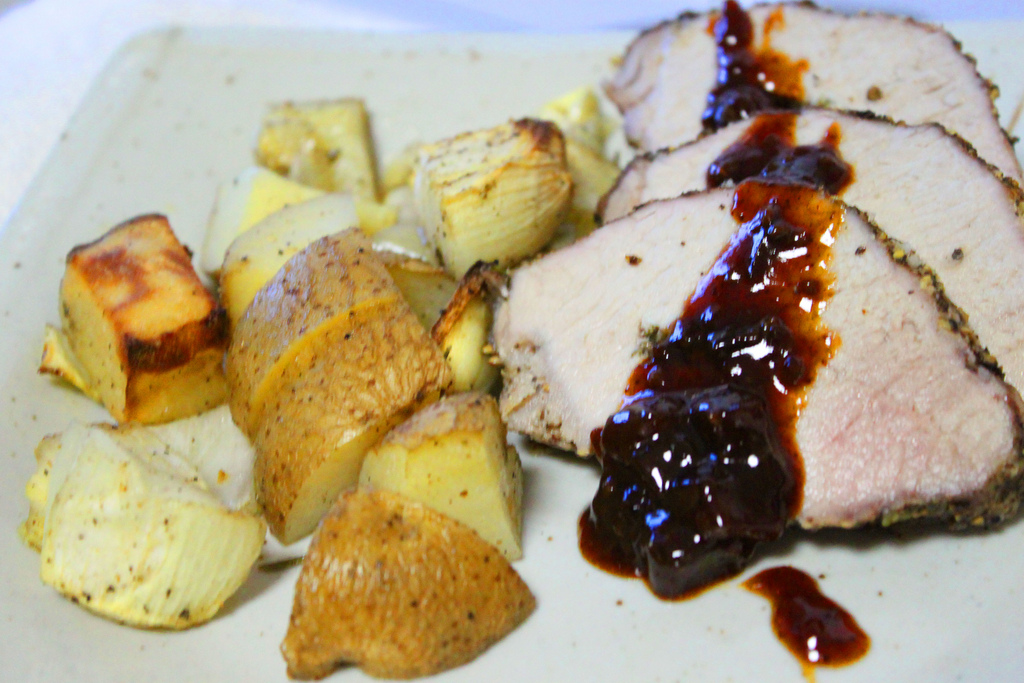 We were at the Anyang Central Market the other day, and I was in the mood to grab a rack or two of ribs. I noticed that pork tenderloin was priced at W700 per 100 grams. Doing some calculations, that comes out to W3,171 per pound. A quick glance on U.S. prices, and pork tenderloin sells from $2.63 to $3.99 per pound. So it’s right around the same.

Nonetheless, it’s a really good deal compared to other meats in Korea, and I hadn’t had a Sunday roast in  a long time. So we got half a full loin.

Now, I used an oven for this one, which I know many expats don’t have, but there are many slow-cooked stove top tenderloin recipes out there, and I’m also sure you could pull this off in a toaster oven, as long as you have some type of meat thermometer.

I first got some coarse ground salt and mixed it with some black peppercorns I had pounded in a mortar. I cut a slit through the middle of the loin and stuffed it with some rosemary and lemon thyme I had just picked up at a flower shop (W2,000 per plant). I rolled the tenderloin to coat it with the salt and pepper and roasted it at 300C for 15 minutes before taking it down to under 200C for some slow roasting.

Pork tenderloin runs into the danger of drying out. The nasty stuff gets killed off at 59C, and pork starts really drying out at 77C, so I took it out of the oven when the thermometer said the center of the meat had reached 68C. The outside of the meat is always hotter than the inside, so it still continues to cook the middle after taking it out of the oven. I let it rest for 20 minutes before slicing, and it was PERFECT!

You can easily make a yuja-omija sauce like the one I made for the duck a few months ago. The executive chef at the Novotel in Daegu has come up with an awesome and bold sounding Doenjang Cream sauce for pork, which will show up in May’s issue of 10 Magazine. I myself had a bottle of Apple Chipotle Glaze from America sitting around and used that instead. Oooh, so good!

I served it with some Rosemary Potatoes, a side dish (maybe Tuscan inspired) that was served at an Italian restaurant I used to work at. Just clean and cut up some potatoes and onions, toss them in olive oil (I use a lot), salt, pepper and fresh rosemary leaves. Roast them in the oven at 200C until tender.