Remember the “fit milk, romantic mushrooms” ad we joked about a while back? Well, despite us all laughing at it, the Agriculture people went ahead with their boneheaded campaign featuring internationally unrecognized K-Pop product CNBLUE.

You remember those late Saturday morning live action high school shows in the ’80s? Remember they sometimes acted like they were in a band, and they put up some bland milquetoast music video?

That’s what it is.

With even blander lyrics.

Brighten up your day with dazzling food.
Life will be delicious.
Warm up your heart. ohohoh
Power up with energetic k food

Anywhere anytime feeling so super
Life will be wonderful.
It just wakes me up upupup
Power up with energetic k food.

The Korea Times’ Jung Min-ho echoes our sentiments in this article.

What in the world are ‘romantic mushrooms?’ (Korea Times)

“Were those bus ads paid for by the government? What a waste of cash.”

“Terrible… first of all they’re talking about ingredients.. there isn’t a single Korean dish there except Kimchi (maybe red pepper paste?)i… well, maybe the mis-naming of peppers as “paprika.” And the adjectives seem randomly matched to their foodstuffs. The video is well shot, but the content is bizarre. Nothing in this that would make me want to eat Korean food… maybe it would make me want to go shopping? LOL… let’s see some Dalk Galbi, Ssambap, or Galbi-tang. And some people eating together, not solo weirdos and their vegetables…”

The general attitude is of embarrassment and ridicule. A friend of mine saw an ad related to the video on a bus in Brooklyn. 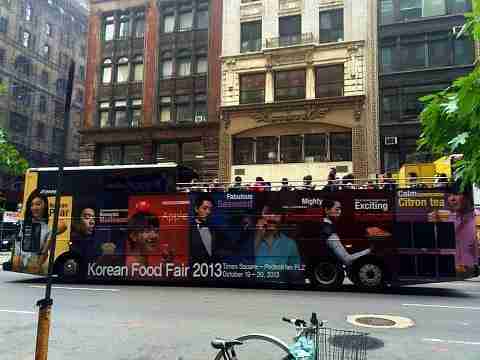 The Korean blogosphere is even making fun of it.

Again, weren’t the agencies being audited for wasting money on ineffective and embarrassing campaigns?

They’re pretty videos. But could we stop with the Korean habit of caring all about image over everything else?

Hey aT, join me over here at camera 3 for a moment.

I know you really want to promote Korean food. You received a lot of money for it and a mandate. We understand that. We want to see you succeed. The trouble is, you’re kinda embarrassing us all. You’re the drunk uncle who knocks into the bride at the wedding and pukes on her dress. Or, you’re more like this woman.

Don’t feel bad. We’re here to help you. We’ve tried to help you before, but you’ve kept ignoring us. Would you listen to us now? We have readers from all over the world. These are diners, cooks, chefs, restaurant owners, food journalists, PR experts. They can help you out. They have great ideas and can help you vet these campaigns. At ZenKimchi we’ve even gotten a consulting business license to help people just like you. We’re not as expensive as the other parties you’ve been spending money on. Forgive me for tooting our horns for a bit, but we’ve been quite more efficient and more successful in promoting Korean food over the years than you have. You, or your friends, pay thousands of dollars for a New York Times ad. Us? We get called by The New York Times to help with actual articles–at no cost to us. In fact, we’ve gotten to become one of the go-to organizations that journalists and media have gone to when doing Korean food projects. In the next few months, check out Men’s Health, National Geographic TV, Bon Appetit, The Washington Post, ABC Nightline. We’ve had a hand in all those projects that reach the audience you are spending so much money to reach.

That is, unless the only result from your campaign is cultural masturbation–showing images of buses in New York to impress the Korean public that you’re doing something.