For Children’s Day, we went to the Picnic on the Bridge, part of the Seoul Food Festival, organized by Chosun TV. What they did was take over the lower deck of the double decker Banpo Bridge and made it into a boulevard of food demos, booths, and food trucks–along with the prerequisite awkward photo stunts and Hallyu promos.

I’m posting this because it encapsulated the current state of food in Seoul, Korean food marketing, and other cultural dynamics. I’m also, as always, talking out my rear, so take this all with a grain of 꽃소금. 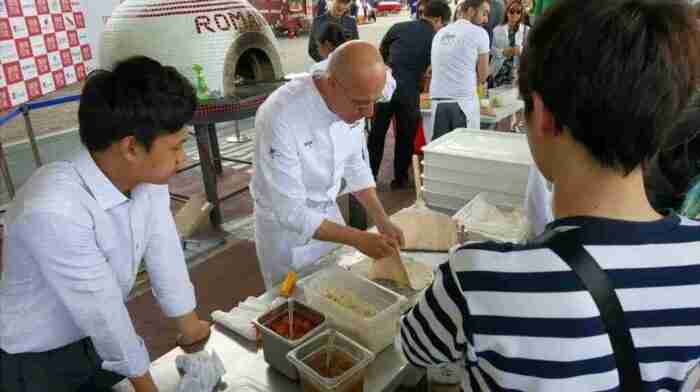 The organizers imported some good VIPs for this one. The most notable was Franco Pepe, the legendary pizza artist from Italy. I did what I swore I would never do–stood in line for a slice of pizza. Thankfully, the line didn’t last that long, and the slice was worth it. The dough was like marshmallowy chapssal ddeok, crisped up, chewy, voluptuous. It was so sexy that I’m sure Red Tube has a channel for it.

Jeannie Cho Lee was there, and I didn’t get around to saying hi. We had done projects over media through the years but had never met in person. Oh well… 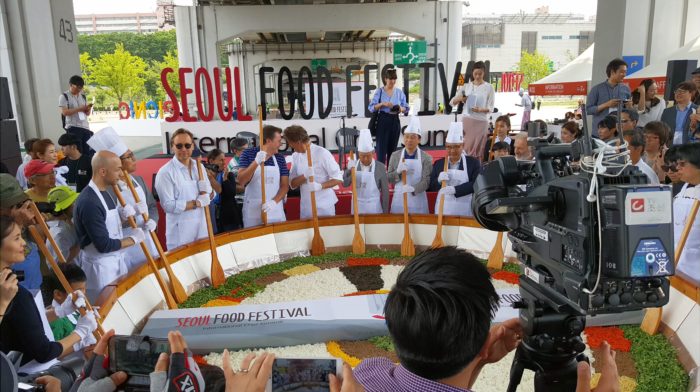 Just like making foreign VIPs wear hanbok and doing the Gangnam Style dance, it’s become standard practice to have a swimming pool of bibimbap stirred up by the obviously embarrassed chefs for the photo ops. Since it was the fastest line, we did get a bowl to share. And we were all surprised it was pretty good. Spicy too. Still, I am eager to retire the Giant Bibimbap™ at Korean food festivals. 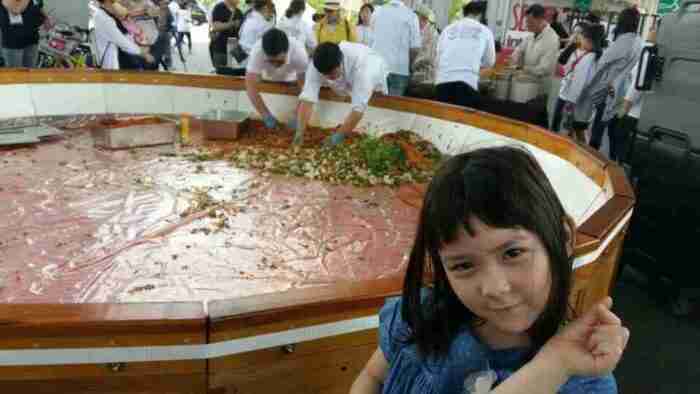 This wasn’t slapdash. The organizers set up credit card machines for the food trucks and concessions. The venue had strategically placed rubbish bins. The tables and chairs lining the bridge were nice. The staff of volunteers were vigilant about making sure everything was clean and orderly.

Balloon animal clowns. K-Pop acts. That made this more of a festival and not just a bunch of food snobs milling about.

This was good and bad. There was a section with a Stella Artois tent, pouring W5,000 beers. There were also wine vendors offering tastings and selling bottles for decent prices.

That was the only place you could get a drink other than Sprite. Sprite was not only a sponsor, they were the one party dictatorship of this festival. Some people were smarter than I and brought their own beverages. I did bring home a nice nosey bottle of California chardonnay for W18,000. Looking forward to popping that open.

Food trucks in Seoul have had a short odd history. The Seoul government officially legalized them half-assedly a few years ago. As in, it was legal to have one but not legal to park one. They can only operate in fake pre-planned events. It’s difficult for them to get a following, and it’s also difficult for them to get consistent feedback to improve their food. Because frankly, most of the food from them sucked.

Most of the food trucks spent more time on their looks and branding than on the actual food. They followed the long tradition of copying other concepts. Not only did most of them copy foreign concepts–badly, I must say–but they copied local concepts, like the Steak-in-a-Cup. That was bad, too.

This goes along with another of my consistent rants. If something works, don’t fuck with it. If there’s a standard dish you are trying to emulate, get the basics down first, and then do variations. Don’t start with the variations. With the Steak-in-a-Cup concept, just a well-seasoned steak with some fries will do. Instead, we got under seasoned steak with nasty onions in sweet gochujang and pumpkin mousse baby food. I didn’t find one truck just doing simple steak and potatoes.

A fish and chips truck just didn’t even try. Well, they tried with their cool British packaging and the overused “Keep Calm and _______” slogan that went stale a decade ago. The sad thing is, if they just did a simple traditional British fish and chips dipped in batter, not only would it have tasted better, they would have saved money. Instead, we got overly greasy cod and shrimp that weren’t fresh, covered in panko bread crumbs, skinny fries (not thick British pub chips, which are easily available–we had them at one of my restaurants), a wedge of lemon, and a choice of tartare, sweet chili, and some other sauce that shouldn’t go NEAR fish and chips.

The result was an inedible greasy mess that no one enjoyed. I keep hearing arguments that they’re catering to the local clientele, but there were NO LOCAL CLIENTELE! No one liked their food. Just some simple beer battered cod, thick cut chips, lemon, vinegar, and a tartare sauce that wasn’t just mayonnaise with a little pickle relish would have done much better.

The Pho truck charged just as much as a brick-and-mortar restaurant but gave much less. Just noodles, MSG-laden broth, and a few scraps of meat. Hardly any veggies. In a cardboard bowl. The point of a food truck is to make something either cheaper than bricks-and-mortars or better than other street food, or both. This is the typical case of Korean wanna-bes copying a concept without bothering to UNDERSTAND the concept.

(I hear that’s how the Oxford Dictionary defines “Cultural Appropriation,” but I guess Asian countries are exempt from that label.) 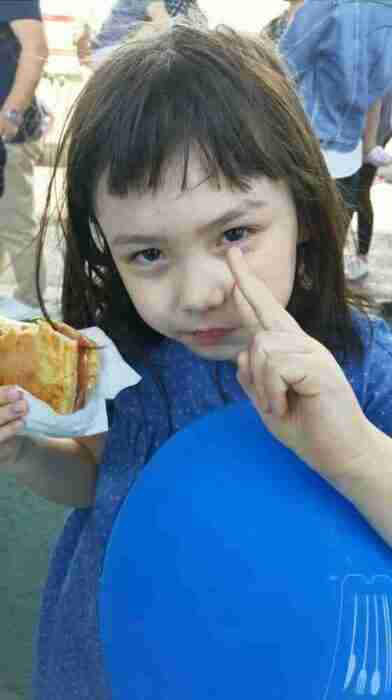 I observed this. The best food we had came from trucks run by women. I had a lovely Pork Banh Mi with good bread, lots of cilantro, full of meat. The Cubano had no honey mustard or sweet pickles. My daughter Jian took it and devoured the whole thing after her first bite.

I may be truly reaching on this, but this is just from observation and conversations with Koreans I’ve had for over 13 years inside Korea.

Women in Korea are way more open-minded than men. Korea has one of the largest gender gaps of any OECD member country. Women are not satisfied with traditional Korean social norms, so they have looked outward. This is why Sex and the City and Manhattan brunch culture took hold. This is why women drive the trends in Korea.

I’d say this is also why girls and women do better than their male counterparts in learning new languages. I remember reading Chomsky or some other linguistic scholar stating that when learning a new language, one must become more flexible with their self identity. Your native language is part of your identity. For a lot of Korean males, learning foreign languages makes them feel less Korean. I’ve had students blatantly say this. They don’t like learning English because they feel less Korean.

Because Korean women are more open-minded to non-Korean cultures, they take more interest in understanding the culture behind the food they’re appropriating. The men care more about looking cool and gaining social status. That’s why a food truck run by women made such a great Banh Mi while the food trucks run by men made the saddest fish and chips in the world and bland steak with pumpkin baby food–all while trying to pose as DJs in their spare time. 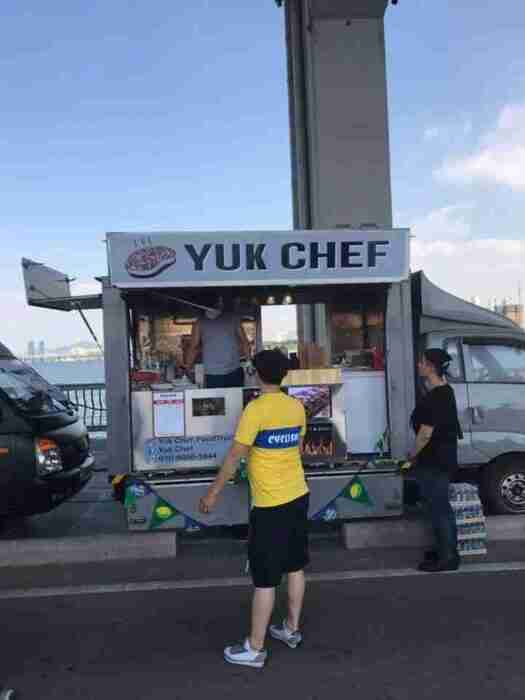 When the Korean and English each make sense

Besides–come on! At least give me a challenge when I’m writing the jokes.

I touched on this in the last section. In Korean language blogs talking about the festival, they also had a problem with this. The prices for a lot of the food trucks was jacked up. We wanted to sign Jian up for a kids cooking course, but they charged W50,000 per child, and to cook what? A hamburger? OMG!

Only a few people shelled out the money for that in the end. Hardly anyone participated.

This is the old thinking. It’s the notion that slapping a high price tag on something makes it automatically desirable (note: Cho Tae-kwon, Hwayo, and Gaon). In the past, noveau riche Koreans gladly lined up and paid premium prices for mediocre food because they wanted to show off their wealth. It was a status play. These days, younger Koreans are more concerned with value. So this festival with their premium-for-crap strategy, organized by the older establishment-thinking ajosshies, didn’t josh well with the mostly younger attendees.

My family met our friends, an Englishman of Korean decent, who is one of the largest Korean food importers in Europe, and a Korean lawyer. We all immediately commented on how sparse the attendance was. The lawyer–whose opinions on food and Korean culture I heed intensely–said that the marketing failed. No one knew about this event. I didn’t know about this event, and I get spammed all the time by these types of things. It was the Englishman who told me about it.

The festival’s website looked decent and modern. It was WordPress–likely the Divi theme, as we use on this blog. But the content was the same stolid old Korean corporate style. All talk of branding and corporate organization trees–as if they were marketing to shareholders and not consumers. The organizers consisted of Chosun TV execs, Korean government officials, and university professors. No one from the restaurant private sector. They even spelled one of the K-Pop group’s names wrong, the one they called “Korea’s Top Idol.”

I guess they weren’t top enough for anyone to know how to spell their name. 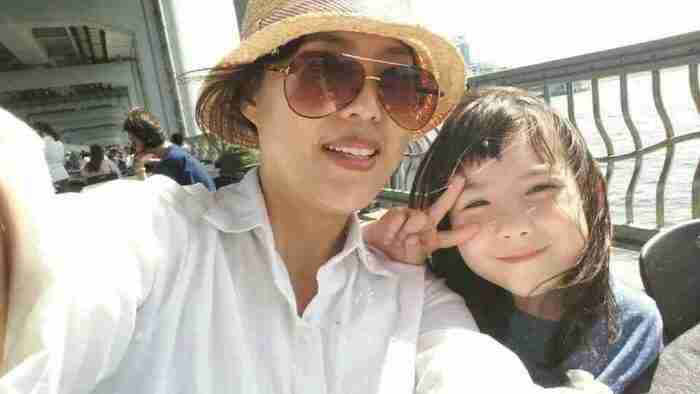 That said, they did well. These events and the Seoul food scene is constantly getting better. It was well organized. Despite 80% of the food trucks we tried disappointing us, we loved having the variety to choose from while sitting on a nice table in the middle of the Han River on a gorgeous day. That pizza I will remember all the way to my dying breath.

The ajosshies-in-charge just need to get their marketing act together, they need to expand the beverage options, and the need to cut back on the silly cliche photo stunts that make respected chefs look like dancing monkeys. I wish something could be done about food truck laws so that these trucks can get some actual experience in the wild, thus improving their food and weeding out the poseurs.

I hope to go to next year’s festival. I’m optimistic that it will be even better. 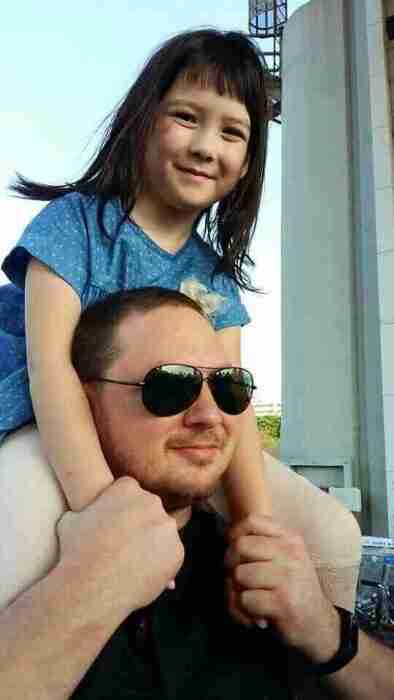