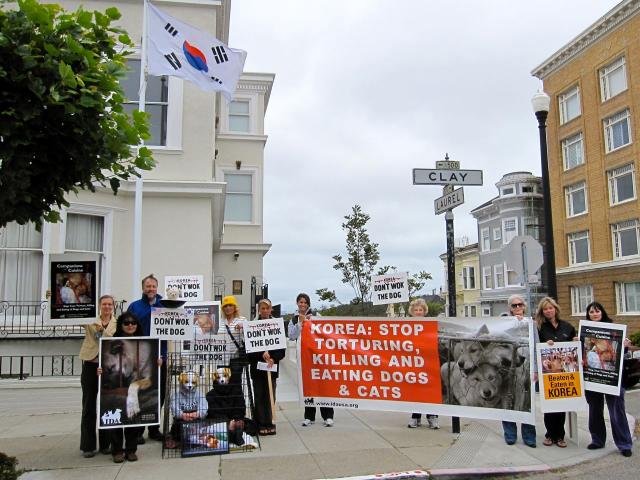 On July 6 for the sixth straight year, an animal rights group led a protest in front of the South Korean consulate in San Francisco over the raising of dogs and cats for food.

A report published by the Korean Association for Policy Studies said that more than 2 million dogs in the country each year are bred and killed for human consumption in South Korea.

Most of these dogs are raised in putrid, horrifying conditions, according to the Marin County, Calif.-based group that organized the protest, In Defense of Animals. The protesters presented the consulate with more than 20,000 signed petitions asking the South Korean government to enforce current laws protecting dogs and cats from human consumption and to strengthen existing laws. 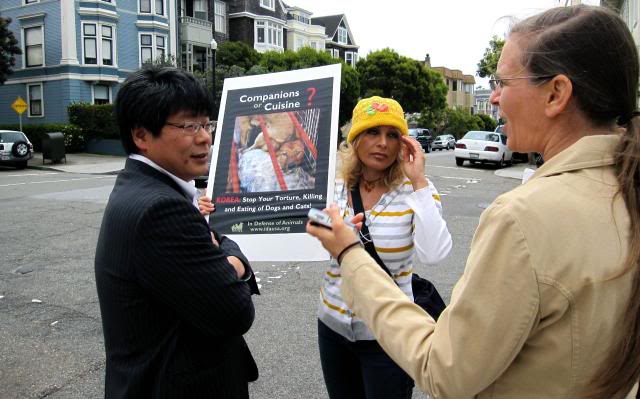 Hope Bohanec of In Defense of Animals presents her case to a South Korean consulate official in front of the South Korean Consulate building in San Francisco.

“When we found out how horribly these dogs are treated and the horrible conditions they’re in,” Hope Bohanec, grassroots campaigns director. “They are literally tortured to death because of the superstition that the more the dog suffers during its death the more virility a man will receive when he eats the meat. When we learned all of this, we couldn’t ignore that and really wanted to draw attention to the issue.”

According to folklore, when one tortures the dog before killing it, the increase in adrenaline and other hormones from the animal will go into the meat and then into the diner — usually a man — and increase his stamina and virility.

The petitions and literature handed out at the event include a promise of a boycott over the issue.

“I will not support Korean businesses, or visit Korea until the horrors come to an end,” the petitions said.

Pamphlets asked people to “write to the Korea National Tourism Organization and let them know that you will not visit Korea until the country stops allowing the flagrant abuse of man’s best friends.” 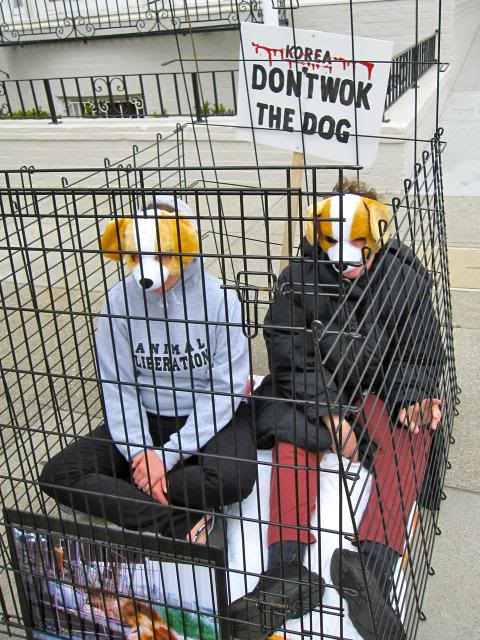 Efforts to criminalize the consumption of dog meat in South Korea date to the early 1980s during preparations for Seoul to host the 1988 Summer Olympics. In 1984 the government outlawed manufacturing and processing of dog meat (개 고기). The city of Seoul has its own law against the processing and consumption of dog meat, calling it a “repugnant food.” However, the momentum continued after the Olympics and the laws became more blunt.

In 1991, dogs and cats were legally classified as “domestic animals” rather than livestock. Dog meat and cat flesh (고양이 고기) aren’t a legal food ingredient. In 2008, the government amended its Animal Protection Act to strengthen protections for animals used for food, clothing, experimentation and entertainment.

“Despite the significance of the industry, there is no clear law governing the trade of dog meat. There is neither explicit recognition of dog meat as legitimate food, nor a clear ban on the sale or slaughter of dogs for food. In the midst of this legal uncertainty, the processing of dog meat has gone underground with no official guidelines to guarantee untainted meat or animal welfare.”

The Wall Street Journal reported that these laws are very poorly enforced in South Korea. There are more 500 restaurants in Seoul alone that serve dog meat soup (bosintang 보신탕 or gaejangguk 개장국) in Korea during the hot, humid summer months, according to the article. It is particularly popular during boknal (복날), or the hottest part of the summer.

John Feffer wrote in The Politics of Dog: When Globalization and Culinary Practice Clash, The American Prospect that “dog is eaten in China, Taiwan, Burma, Indonesia, Laos, Vietnam, Ghana, and the Congo, and by various indigenous peoples and desperately hungry Arctic explorers.” Yet most of the general public in Western countries focus their attention on South Korea’s dog cuisine culture.

Kim asserted that since “Korea is industrialized, Westerners seem ever more compelled to point fingers at Korea (while there are other countries whose citizens eat dogs), unable to comprehend why those Koreans, presumably civilized because of the industrialized nature of the country, insist on eating dogs.” 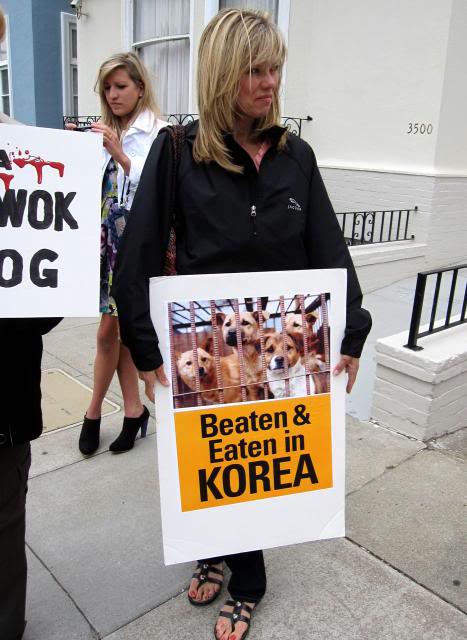 Opponents to doggy delicacies see a potential end to the practice growing with time in South Korea.

“The younger generation wants to be more Western and they don’t eat dog, because they know westerners don’t eat dog,” Bohanec said.

The length of time taken to slaughter a dog — said to take an hour or more — has helped to change their minds, according to Bohanec.

“The new, younger generation doesn’t want to see these dogs being tortured, butchered and murdered,” she said. “It’s really sad for them. Some of the descriptions we have received of the way these animals are killed — it turns your stomach and breaks your heart.”

Culturally, Koreans do not indiscriminately eat dogs. A primary defense from gaegogi lovers is the meat only comes from the Nureongi (누렁이) or Hwangu (황구) breed, which is raised for that purpose.

However, dog farms are accused of routinely butchering stray street dogs, ill dogs and even stolen pets for consumption in local restaurants. Representatives from CARE rescued a Cocker spaniel, Yorkie mix, German shepherd and golden retriever and other dogs from cages at a breeder in rural South Korea earlier this year, according to Bohanec.

“All different breeds of dogs are used and butchered,” she said. “It’s just whatever dog they can find. Some of them are street dogs or stolen pets.”

The Korea Times reported last year that restaurants that serve boshitang are willing to replace dog meat with rabbit, rat and cat meat when supplies of dog meat are low.

Bohanec’s group protests the eating of dog meat to bring the practices of the industry supplies it to an end.

“We understand the majority of South Koreans consider dogs and cats companion animals,” she said. “This is a small minority of people that do this.”

Others at the protest were interested in drawing attention to the treatment of animals around the world and convincing the South Korean government to take a more active role.

“I hope it knows that we know that is still going on and we wish they would enforce the laws that are on their books,” said a woman who gave her name as Deborah.