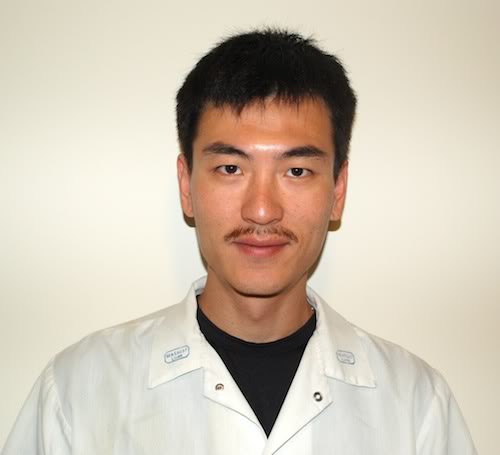 Youngsun Lee immigrated to Queens, New York, from Korea when he was 12 years old. He graduated in 2005 with a degree in culinary arts from the Institute of Culinary Education in New York.

Lee comes from a family of chefs steeped in the history of Korean cuisine. His aunt taught him the fundamentals of Korean royal cuisine, and another member of his family served as a sashimi chef in South Korea’s Blue House (residence of the President) in the ’70s and ’80s.

He interned under David Chang, proprietor of Momofuku, and Anita Lo, owner of Annisa, before opening the “neo-Korean” restaurant Persimmon in 2008 and closing it in recent  months. He is currently teaching classes in Korean cuisine (Korean Barbecue, Korean Cooking for Seasons and Kimchi) at the institute.

Lee is one of the featured speakers at the Asian Feastival in Queens on Sept. 6. If you want to meet him in person, he’s hosting the Asian Feastival Culinary Bike “Tour du Jour” from 9:30 a.m. to noon. Follow him on your bicycle for a food tour of a local Korean community garden and the Queens County Farm Museum. To sign up for bike tour in advance, send e-mail to biketour@asianfeastival.com.

How do you define Korean cuisine?

I can go deep in history but then it’ll be really long. So I’ll try to make this short, maybe by giving some examples.

So, Korean cuisine is almost like combo between Japanese and Thai. We are very big into fish sauce like Thai , but we have about over 100 kinds of fish sauces in Korea. Chinese and Japanese don’t use fish sauce in their cuisine. Like with Japanese food, we do soy stuff — miso, tofu, soy milk, etc.

We are very seasonal. We have four seasons in Korea. So we do follow seasonal food, like, religiously. There are unwritten rules we have to follow as a Korean chefs:

We are known as health freaks — very health-minded. We watch what we eat. Therefore, we like mix and match our food right. Then it’ll benefit your body and soul. But if you mix and match wrong, then it’ll harm your body. For example, never mix eel and peach, but beef and scallion is very good match.

Korean cuisine is salty food. We do consume about 20 percent more than European or American, which is a lot. So, when non-Korean people start Korean food as Korean does, then he or she might have some problems. Koreans are fine eating all that salty food, because in Korea, we very good salt. Plus, we’ve foods for a very long time. We are trying to cut down, because mixing with Westernized food has made the new generations of Koreans heavier and unhealthier than before.

Like I said, I can go on and on about the Korean Cuisine.

What are your favorite cuisines, beside Korean?

I like all food and cuisine. I am a foodie. I like trying all kinds of food — Asian to African to Latino to European to American, etc. But if I have to “choose” few: Italian, southern or Sicilian; Latin, Spainish, Colombian, Mexican — real Mexican, not Baja Fresh; Japanese; northern European, including Iceland; and of course, French — I used to go to Montreal a lot. Even what’s called “street or market food,” some of ’em are really good in taste and health too.

For example, when I was traveling in Korea, most of the time I had food in outdoor markets. Some of ’em were really well-known, and I had to wait in line for up to two hours. And I am sure that — let’s say if you go to Mexico — I want to try their breakfast at 4 a.m.; they have a feast at . It’s 4 a.m., but there is a line for it.

It doesn’t matter what ‘kind’ of cuisine. As long as it’s made of what people are used to, then it’s good for them. Then I’m sure it’ll be good for us, whoever is willing to try it.

One time, I had a chance to visit a farm. It was my eye-opening moment. I had a really nice time playing with a baby cow and all. But the next day we had to butcher and consume . When I was grilling the meat, I found tear rolling down my face. I didn’t feel sad that this cow died. I felt so thankful to this cow that gave up his or her life to just to feed people. After that, I have been really trying to thank any farmer who brings real food to our tables and try really hard to use all parts and not waste any.

What did you learn from your experiences with David Chang and Anita Lo?

I knew you were going to ask this question, because I always get it.

Let’s do Anita Lo first. At that time, I was doing an externship at Anisa. It was good that I wanted to stay but had no opening. I was very new to the industry, so I just soaked up everything like a sponge back then. But most, the kitchen was very smooth and there were no yelling or anything bad vibe. So I learned to run a kitchen very calmly and nicely so that everyone who’s in that kitchen feels good and wants to cook for food. I learned how take care of people well.

David Chang. Yes, the master Chang. Because he is Korean — who grew up in D.C. area, can’t speak Korean that well and sometimes seems like he not proud being a Korean; this is just a personal view — and I am Korean. Plus I used to work for him, although there was not a single time that I was in line with him and cooking together.

Don’t get me wrong; I like him. I think he’s great businessman. I can’t say he’s a great chef, because I’ve never seen him taste his dishes cooks. But he had good ideas, good capital, and good people who can bring his ideas to reality, and most of all “good timing.”

Oh, yeah. there were lots of yelling and stuff in Momofuku. He does care about the ingredients a lot — sometimes too much. But that’s why he’s where he is now. Many times, I had to add tons of salt, because it was not seasoned for his taste. I had add more water and stock  for customers — they told me it was way too salty. So when I was working for him, I was really not sure if he is a chef or businessman. He seems more into getting his name out there than cook as chef. But I did learn many things during my stay at Momofuku. But most things were from running a kitchen — a small kitchen — not really from him.

What lessons did you learn from opening your own restaurant that you can pass on to others who are considering a career in the culinary world?

Wow, this is really a tough one. As you know or not, I had to close down my restaurant. I had it for a bit less than two years. Yes, it was a lesson for me — a very expensive lesson.

I thought I did enough research, and I thought I was ready. And we were. concept was good, food was good, reviews were great, we were doing well. But had some problems getting the liquor license, market fell, and all. At one time, our reservations were backed up for three weeks, but after Lehman Brothers went down we averaged less than 20 tops a night. We did get our business back, but it was too late.. Our capital ran out, and couldn’t keep up any more.

So, research, research and research. You need a good capital, a good concept — especially in New York. can be great, but it can eat you up in days. Here in New York, we have everything; we we have more sushi places than McDonald’s restaurants. If you don’t like you just go to next block, and they’d have same or similar food there also. But somewhere else other than New York, patrons don’t have many choices. But if you go to some cities in the States, maybe one or two sushi places.

You also need good timing. Even though the food is great, if the economy is not great then people will not come out to eat. So opening a luxury restaurant wouldn’t be fit for a harsh economy. People literally wants to “solve” their lunch under $10 and dinner under $20. During the period our market was falling so deep, only McDonald’s profited from their sales. During that time people just didn’t spend money on food . Now you can imagine how many restaurants had to close. The famous ones are gone too.

But, again, if you wait ’n’ wait, then your dream will fly away. But if you rush it, it will run away . Be wise, kids: Follow your heart and passion, but don’t forget your head.

What is it like to go from a culinary student to being a culinary professor?

Well, for me, the hobby became an occupation. I went to the School of Visual Arts for a degree in graphic design and fine arts. After I graduated, I was in that field for about four years but couldn’t not get a job that I wanted and just could not fulfill myself. Plus, I couldn’t imagine myself sitting in front of computer for rest of my life.

The next thing I liked — not I was good at — was food. I was not going to school for it, so I did tons of my own studies and research. Actually, that helps me a lot when I teach at school. (I am trying to get a few more teaching positions in other schools.) But I’ve decided to go to school. I really liked it and did learn a few things out of it. Not many.

But I think that anyone who wants to work in the kitchen should have some kind of formal education in culinary arts. I’ve seen it in many kitchens. But again, sometimes those Mexican fellas didn’t have any culinary education, yet with no experience are a better choice than a culinary school graduate with a “big head.”

From student to instructor, I really like it. I like teaching, helping but never thought I’d be a teacher of anything.

I do teach many other things, but mostly I am glad that I do Korean. And I am kind of the first one to teach Korean in New York. As a student, I used to look up to those chefs taught us. Now these people are looking up to me. It makes me humble in many ways, because what I say can effect their lives in the future.

More and more, I have to keep doing research to keep up with more information and stories. I like history of food and background stories to tell my students. I think, in this way they will never forget; all my students know about carrot and eggplant really well.

Funny thing was that when I was in school, during the Asian food section I had to correct our chef in many things. I kind of ran that section. Since than, somewhere in my heart I felt that there needs to be better information in teaching.

My title may say “chef,” “professor,” or anything, but mine is an ongoing learning experience. A friend just opened a cupcake shop, and I offer her my help for free so I can learn baking. I am just glad and blessed to share some of my knowledge to hopefully make people better cooks or change of their thinking about food.