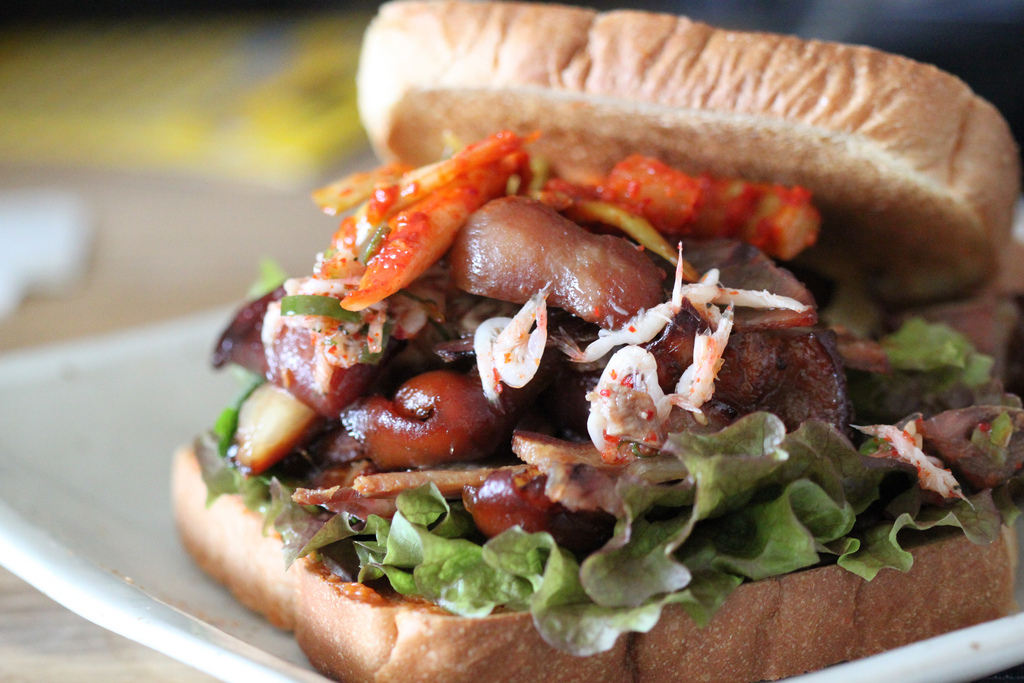 This is classic Joe. Ever since I used to stuff mashed potatoes and green beans into my rolls in the elementary school cafeteria (very good comfort food, BTW) I’ve always been the weird kid who eats weird things, especially if surrounded by bread.

We had some order-in Jokbal (Korean Pigs Feet) the other night that turned out to be awesome. The next day, we had a good many leftovers, and EJ had had her Jokbal fix for the year.  Jokbal are sort of like roast pork or ham, so why not make a sandwich out of the leftovers?

So what I did was toast two pieces of bread. Other than the bread, it was just like eating Jokbal at a restaurant. I spread some Ssamjang on the bread and layered it with lettuce and sesame leaves. Then I piled on the meat that I had reheated and sprinkled some pickled shrimp. Topped it with that sweet fresh kimchi that they gave us. Smashed it together and took it to work.

Verdict. A tad salty. Maybe too much pickled shrimp. But it was a successful application of Ssamjang as a sandwich spread. And it filled me up for the day. Granted, I drank three glasses of water after it. But hey, not a bad sandwich.

In other sandwich and bread news, Paris Baguette now has these fake crab meat sandwiches with wasabi mayo. I think we’re getting closer to decent sandwiches from the bakery chains. It wasn’t a mayonnaise bomb, and the bread was a butter roll. The veggies were lettuce, cucumber and a tomato, which made it taste fresh. I’m gonna get hooked on those. Also, PB has started selling cinnamon buns.