We got up around 4:30 and jumped on the bus at 5:15. Breakfast was some rice with longanisa (yes!), nicely flavored fried fish, chicken, and egg. We also grabbed some McDonald’s coffee. The ride this day was to some docks with narrow crowded boats. 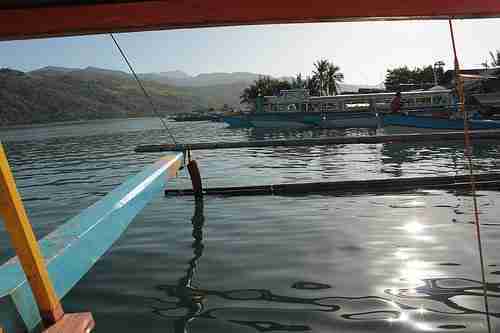 When we got there, we were bombarded by porters wanting to take our luggage. The guides made sure our luggage was properly placed on board. We balanced our ways onto the boats. I’ve been wary of my sense of balance lately. Remember, I had that fall in the sauna last week. Plus, I was carrying a heavy sidebag with my computer and cameras. But I was able to tiptoe onto the boat. You had to get in to your bench by climbing through the window. 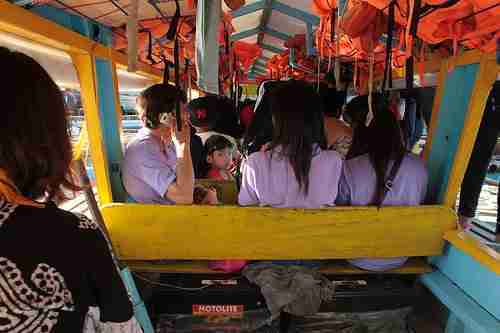 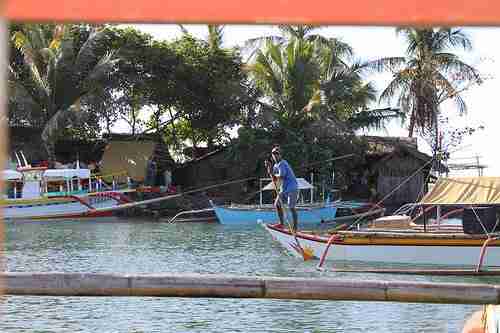 The benches were so narrow that I had to sit with my legs spread the whole time. It was a cramped two-hour ride, but it was beautiful. 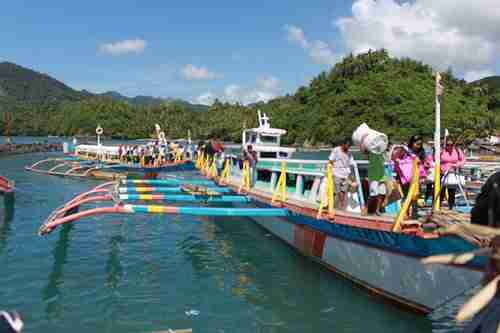 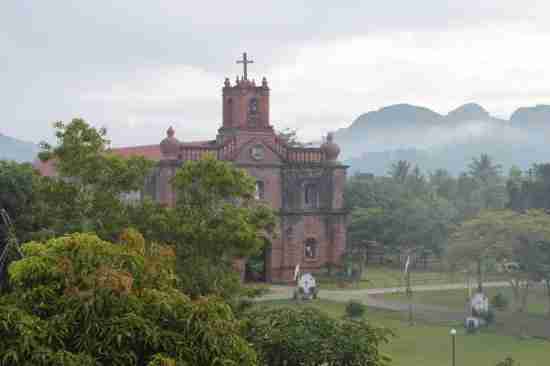 At the port of Caramoan Sur, we were taken to a quaint house/hotel across from a 16th century church. After some time to unpack and rest, we immediately went to Rex Tourist Hotel to eat lunch. 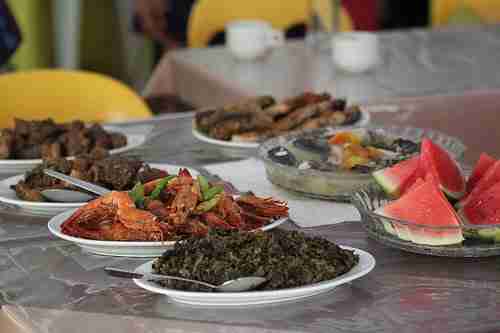 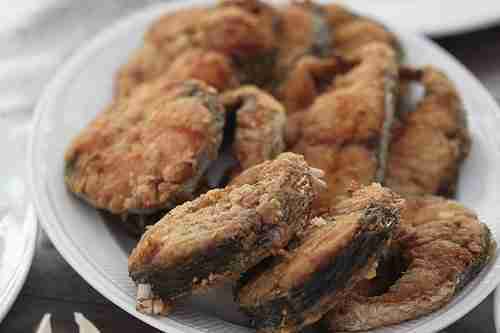 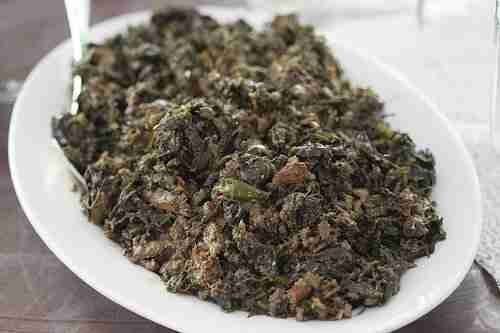 Laing. My favorite veggie dish in the Philippines. 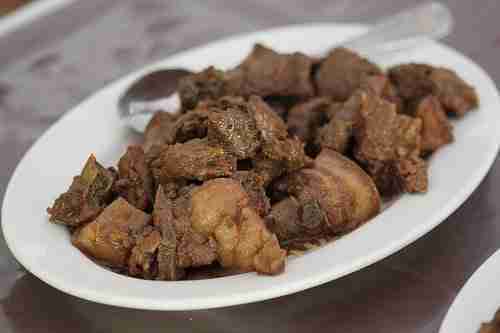 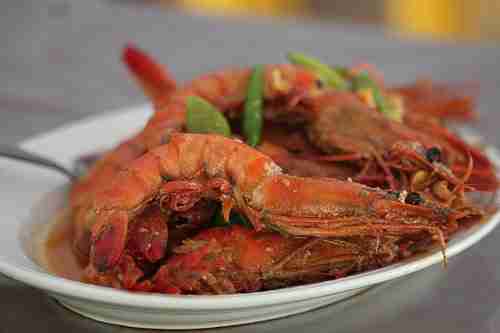 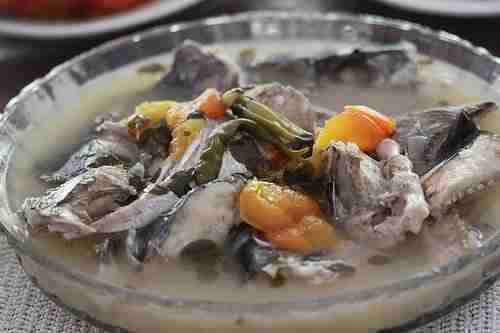 Another amazing meal! We had bright and sour fish sinigang, pork adobo, these giant ass shrimp, and Laing–gabi leaves and pork cooked in coconut milk. I loved the gabi leaf dish so much that I could go vegetarian with it. I made sure to heap on seconds. 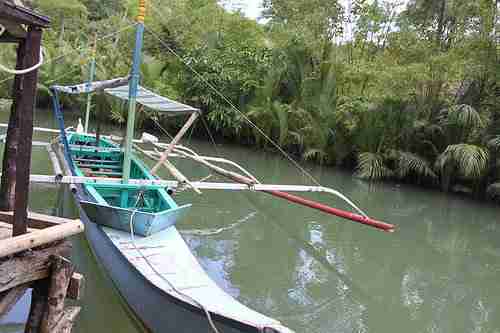 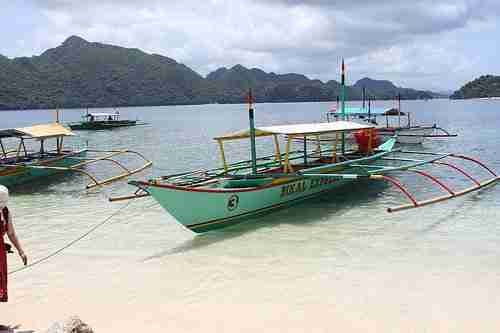 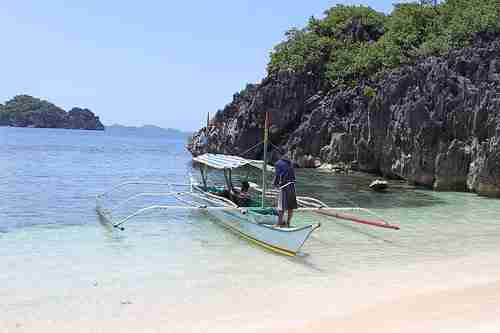 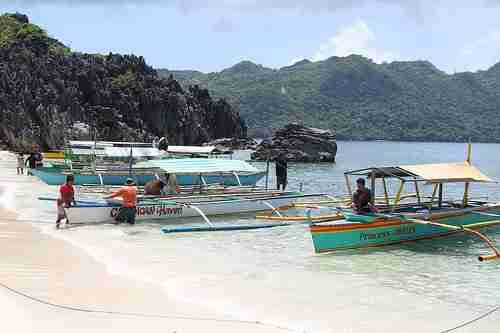 Our big activity today was island hopping. We got into another narrow boat—a lot less cramped this time—and headed to a small island out of many. This was used for the TV series “Survivor” for many countries, most recently the USA version. We jumped out and went under a tree. I took a few pics, kicked off my shoes, put down my glasses, and joined Joanna in the water. It was so invigorating. I hadn’t gone swimming since my unfortunate surfing scene in Jeju Island. And before then, I guess it was over ten or fifteen years since I’d gone swimming. I thought I had lost my skill or that my body was too old and crampy. But no, I took to swimming once more. It was so relaxing. 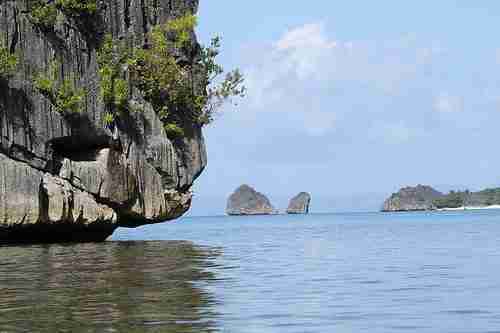 After a good time swimming, we boarded the boat for the next island. I decided to leave all my stuff on the boat this time. We were also able to coax more of our group into the water. We wandered around the rocky edge of the island to a more secluded place. We found a starfish there. There was a father teaching his young daughter how to snorkel—I want to do that. Can’t wait for Jian to get older. That was such a perfect father-daughter moment.

Before we got to island number three, we stopped in the middle of the water. It was around 20 feet deep here. I jumped in and swam. We all had been casually holding on to life preservers just in case we wore out. This time, I felt more confident. No life preserver for me. I got in, and I swam a long way. The trouble was that I assumed we were going to the beach right in front of us. 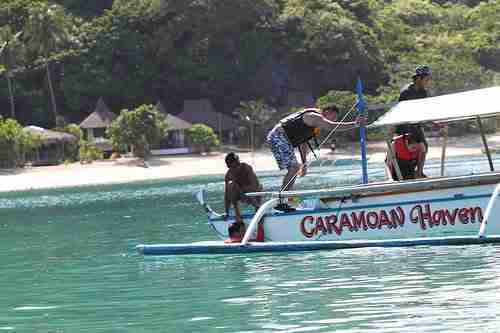 I realized this when I was almost at the beach. So I had to swim all the way back out to the boat. Great exercise! I noticed some people standing up in the water. Turned out there was a little coral reef there. We took turns putting on a pair of goggles and looked at the colorful fish swimming in the reef.

Our last stop was a nice small leisurely beach. I want to do this again with my family. This is something I’d come back for.

We got back all sunned and tired. I took a shower and decided to eat my fruit. Remember I bought fruit yesterday? Well, I think it sat out a bit too long, and the ants found it. But I did get to try my first dragon fruit and jackfruit. Liked the jackfruit. Tart like a pineapple but with a bit of that custardy durian texture.

Oh, I want to get some durian! I would have bought some at the supermarket, but I have no way to open it. 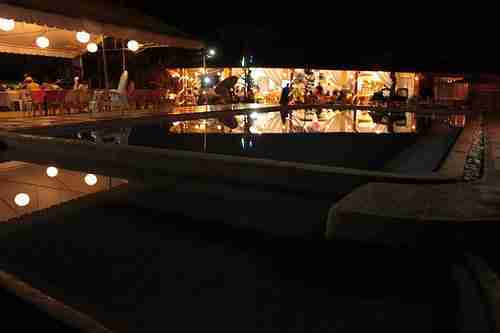 Back at the Rex Tourist Hotel, they had made us some crabs. They were okay but not as good as the lunch we had that day. I did try a new beer and a new vegetable. 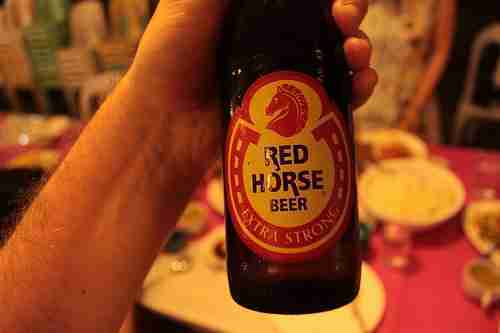 Red Horse is the stronger version of San Miguel. It reminded me of Cass Red–like a shot of soju had been dumped in it. I decided to stick to the trusty San Miguels. 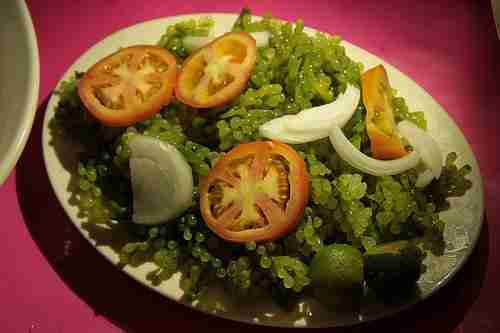 Now this was the interesting one. Sea Grapes. I had seen these floating around while we were swimming, and it was fun popping them like bubble wrap. They dressed it in tart calamansi juice. Joanna and I liked it. The Koreans didn’t. I was surprised since they eat so much seaweed anyway. The texture was fun. Pop! Pop! Pop! The flavor was tart and salty with only a slight iodine and fish flavor. Mostly tasted like the ocean but very intensely.