Korean Food Tours | What You Need To Know First

Korean food tours are one of the top things to do in Korea. When you’re putting together a Korea itinerary, do a food tour or cooking class early. It’s relaxing. It gets you oriented. Best of all, the guides and instructors will give you tips on where to eat for the rest of your stay.

There are different tours for different budgets. From experience, here are a few tips that every traveler should know.

Many of the tours those sites list are tours that companies already do themselves. They re-post them on TripAdvisor because they almost have no choice. TripAdvisor has deep pockets for marketing, which is why they’ll always appear on the top of search results. Even Google’s new Touring Bird travel app will only post tours from the big dominant companies. If tour providers don’t post a tour on TripAdvisor Experiences, they get overshadowed by their well-heeled marketing team.

Companies like TripAdvisor take 15-30% commission on tours booked through their sites. Tour providers aren’t allowed to post prices lower than they are on the OTA websites. Yet they still have to have competitive pricing.

You see the dilemma here?

If you see a tour you like on TripAdvisor, do a Google search for that tour or click the name of the company providing that tour at the bottom of the description. You’ll likely find the original version of that tour, using the same photos and similar text. Booking through their sites helps them pay their bills.

TIP: Be on the look out for special discounts on tour provider sites. Even though they can’t post prices lower than the OTAs, they can give coupons and group discounts that the OTAs don’t provide.

This brings me to another small rant: TripAdvisor isn’t a tour company.

I had a guest who had booked my tour through TripAdvisor. When we met, she started complaining about how bad my company’s other tour was. It took me a while to figure out that she thought that TripAdvisor/Viator ran both those tours. They’re basically ticketing agents. It annoyed me that a separate bad tour was associated with mine because we both were on TripAdvisor/Viator.

Find a Tour That Fits You

You’ve seen this before. The tourist joins a food tour and makes demands for special modifications on dishes.

I was leading a tour at a Korean BBQ restaurant, and a group of Americans sat down near us. The restaurant staff asked me to interpret for them, and I obliged. This is an actual conversation I had with a couple of them.

Person #1: I want beef and pork.
Me: This restaurant only serves pork.
Person #1: In America, I usually get beef and pork.
Me: In Korea, restaurants usually specialize in one type of meat.
Person #2: I want a Diet Coke.
Me: Korean restaurants usually don’t have diet drinks. They have cola, lemon-lime soda, beer, and soju.
Person #2: No hot tea?
Me: No hot tea.
Person #2: This is all meat. I’m vegetarian.
Me: Yeah, they don’t really have vegetarian BBQ at a Korean BBQ restaurant. This place does have noodles.
Person #2: Gluten-free?
Me: Um, the chilled buckwheat noodles don’t have much gluten, maybe?
Person #2: Chilled? Ask them to serve them hot.

I once did a private tour for three people, and these three had the perfect storm of food restrictions.

I found out on the tour that the person who couldn’t eat spicy food also couldn’t eat much anything that had a stronger flavor than bread. Even black pepper was too strong. I asked the cooks at each place to modify the dishes according to their needs, which Korean restaurants don’t do.

Towards the end, they suddenly wanted dessert. Korea doesn’t do desserts. We have cafes that have western style cakes and such, but there aren’t traditional Korean desserts. It was the only tour that demanded a refund.

You see what all these people were doing?

They were trying to get the culture to fit them. If that is you, PLEASE do everyone a favor and Don’t. Book. A. Food. Tour.

Vegetarian tours do exist. They’re good. But don’t be the person demanding everyone adjust to your whims.

All the Korean Food Tour Information In One Place 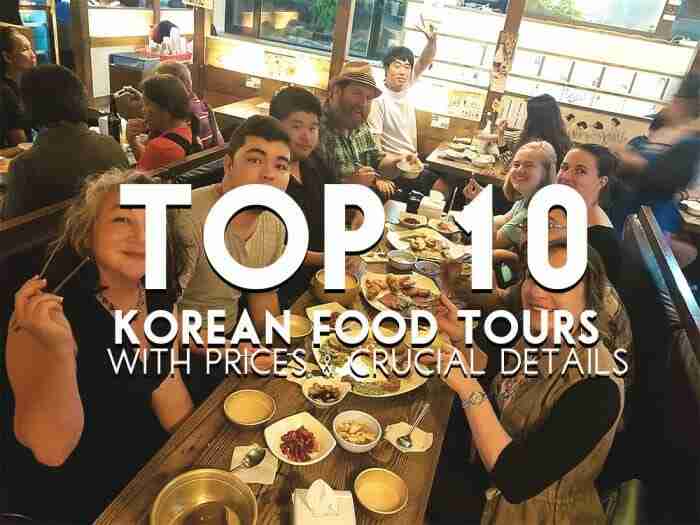 I’ve gone ahead and compiled as much information about the top Korean food tours on the peninsula. Use this information wisely, my friend. 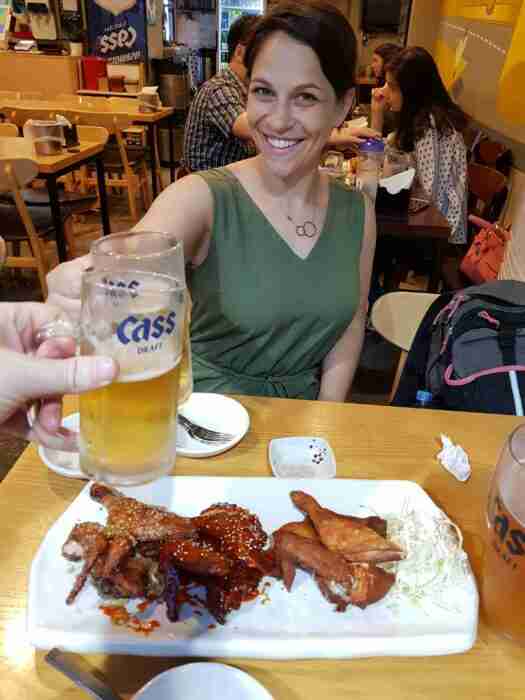 Travelers tell me horror stories of other tours they’ve been on. I get so upset with unprofessional conduct in our own industry. They shouldn’t be in the hospitality business.

There was some guy posting a Korean chicken & beer tour. His tour consisted of picking the guests up at their hotel, taking them to Han River Park, ordering chicken and beer, and leaving them there to their own devices. That’s it.

TripAdvisor is a great tool for research. It shouldn’t be your only tool. I use it. I also check other places.

We started out ranking well on TripAdvisor. Suddenly, we were going lower and lower as new companies started coming out. I was wondering how they were able to get so many positive reviews so quickly to rank so highly.

I was at a party where one of the tour company owners was bragging about his technique to use VPNs to create fake accounts to leave fake reviews. This helped them rank higher. This is a common practice in the Korean restaurant industry. There are whole companies around the world that people hire to create fake reviews on TripAdvisor. They’re cracking down on the fake reviews, but a lot of the damage has already been done. When a tour or property gets in the top 5, it generates more sales, which generates more reviews.

We refuse to do that (to our detriment).

Take TripAdvisor reviews with a grain of gochugaru.

Be Prepared for Cancellations

You book a tour. You plan your whole day around it. The day of the tour they cancel. Not enough people booked the tour.

What a frustrating way to spend your vacation!

A conversation with one of my solo guests sparked this whole blog post. She had planned her whole day around a food tour. They cancelled the day of the tour. Luckily, we offer tours for solo guests. Haha–I guess we’re people’s backup option.

Viator/TripAdvisor tours are guilty of this a lot. The rule of thumb is, the cheaper the tour, the more unreliable it is. They’re going for backpackers, college kids, and cheapskates to get bulk bookings. Most will not accept solo travelers. Some do but will cancel if their bookings don’t reach a minimum threshold. Keep that in mind.

Eyewitnesses have told me of one tour that is just one big cheap drunken pub crawl, full of backpackers doing shots, sexually harassing strangers, and throwing up. If that’s your thing then go for it.

Cheaper tours tend to go to more touristy areas. They don’t give you that full immersion experience.

Now that I’ve scared you, I’m going to backtrack. Viator/TripAdvisor does have some great exclusive tours. There are a lot of great companies out there. I’ve had this post on the back burner of my brain for years now from all the stories guests have told me on the tours. This isn’t just coming from me. I’m channeling their warnings to you.

All the Korean Food Tour Information In One Place

I’ve gone ahead and compiled as much information about the top Korean food tours on the peninsula. Use this information wisely, my friend.