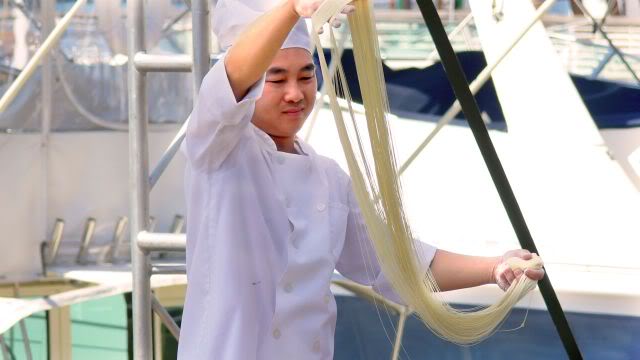 Among the more than 80 caterers, mobile and brick-and-mortar restaurants, and food-related vendors at the second annual Eat Real Festival in the San Francisco Bay area were two Korean “taco trucks,” a nouveau hanshik restaurant, a ramen restaurant serving kimchi and a food-preservation specialist teaching how to pickle the popular version of it.

Did I mention the live demonstration of making Chinese pulled noodles (lai min)?

Intensely craving some Korean yumminess, I attended the festival, held Aug. 27 to 29 at Jack London Square in Oakland, Calif., to snack on selections from Santa Clara-based MoGo BBQ and Seoul on Wheels of Emeryville. Reviews of those rolling restaurants will be posted in coming days. 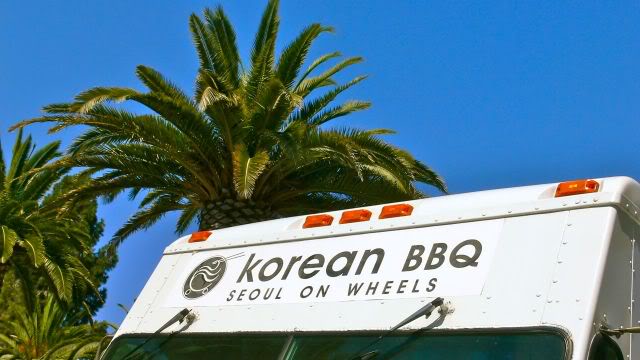 Seoul on Wheels parked under the palms of Jack London Square in Oakland, Calif. (Photo by Jeff Quackenbush) 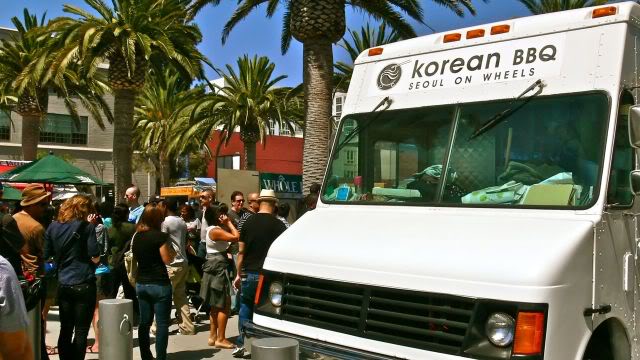 One newcomer to Korean food took celebrity chef Guy Fieri's advise to pick the longest line for the best food, which led him to Seoul on Wheels. (Photo by Jeff Quackenbush)

San Francisco neo-Korean restaurant Namu also was was among the “street food” vendors, but I already had sampled Namu’s Korean tacos at the restaurant’s stall at the San Francisco Ferry Building.

Jack Birdsall of SF Weekly called this year’s Eat Real Festival, a “county fair in a parallel universe.” Giving that vibe to the festival were food-making performances, classes and contests.

I attended the festival on Aug. 29 also to take in the noodle-pulling demonstration and kimchi-making class. Chef Gordon Xiao of Ark Chinese Restaurant in Alameda showed how fresh dough is kneaded, rolled, twisted in mid-air, stretched, slapped on the table and pulled to make noodles of various thicknesses. He said it took him two years to learn the technique. 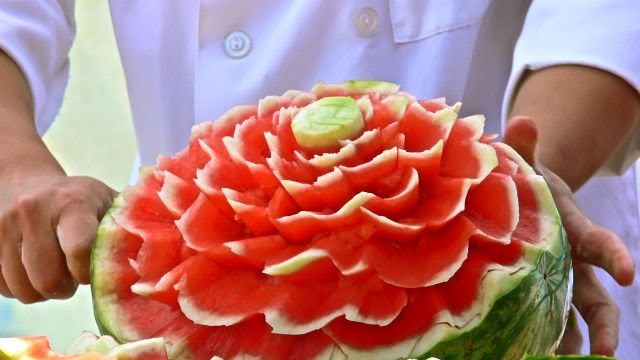 Chef Xiao was a little concerned that the watermelon was "too ripe" for carving. (Photo by Jeff Quackenbush)

Xiao also showed the Thai melon carving technique, taking 10 minutes to show how to carve a flower in the side of a watermelon rather than the few minutes in which it is normally completed. He finished the demonstration time with a quick sculpting of a carrot into a bird.

At a stage in the “urban homesteading zone,” Delilah Snell of Project Small spent 19 minutes going through the ingredients and steps in making the commonly recognized spicy Nappa cabbage kimchi (called baechu kimchi in Korean). In highlighting the natural Lactobacillus fermentation that goes into making kimchi, sauerkraut and other pickled foods of simpler times, she had an appropriate backdrop, a miniature rough-hewn log cabin with a grassy sod roof. 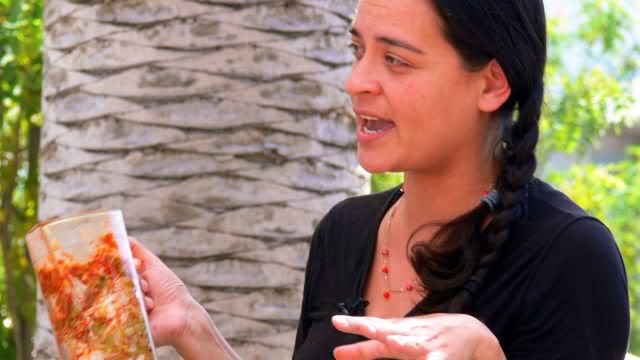 During the question-and-answer period, Snell and I had a minor disagreement over what to do with “old” kimchi. I noted that Koreans commonly use it to make kimchi stew (김치찌개 kimchi jjigae), but she suggested that kimchi more than a few months old could be unhealthful.