Gangnam’s Food Cart Thugs are At It Again! 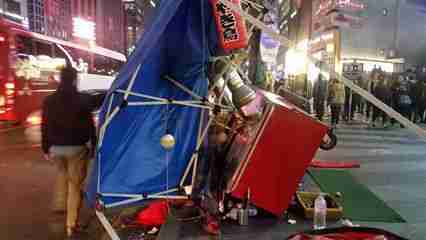 Yes, the local Gangnam government has again hired thugs to violently flip over street food carts parked illegally. In the past they have used the excuse that it’s for public safety. Like when they did it in this video.

Soak in that logic for a moment.

Using violent gangster-thugs to trash an area for public safety. Why don’t you get the Hell’s Angels to act as security for a rock festival while you’re at it?

It shows that despite all its wealth the Gangnam elite are still hardly a generation removed from a third world country. There has to be a better way to deal with illegal street food carts, which are considered some of the biggest charms of Seoul by visitors, than throwing public temper tantrums like a three-year-old in a toy store.

Just deal with it like a civilized society. And I’m sure you’ll get rid of all those dirty poor people selling street food, and you can have your sterile paradise of Dunkin Donuts and Starbucks the way you want it.