This week was packed! There was no way I could do everything I set out to do, but I did as much as I could on Friday. 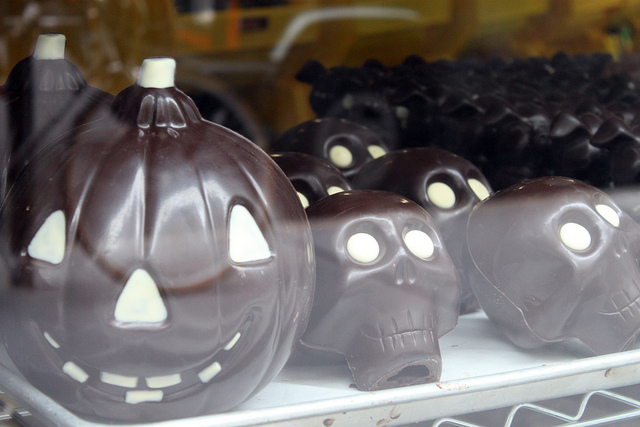 I set out in the morning for Jacques Torres on Hudson Street to get a box of chocolates for my ailing grandfather, whom I was leaving the visit the next day in Alabama. He’s a picky eater, but he’s always had a fondness for chocolate, keeping petit fours and Whitman’s Samplers at his house, which I always raided behind his back. I felt that I needed to repay him with a nice big 50-piece box of chocolates from one of the world’s greatest chocolatiers. I was holding back the urge to get teary eyed as I got them. 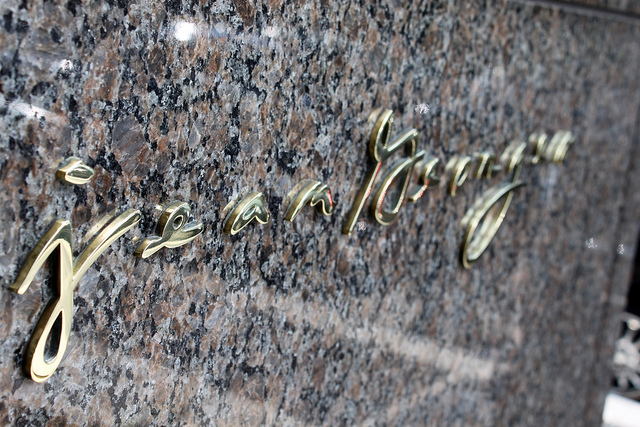 After dropping them off at the apartment, I met ZenKimchi friend Zach in front of Trump Tower at Columbus Circle. We had plans to sit at the bar for lunch at Nougatine at Jean-Georges. I had been told by a few that I needed to go there, particularly since he and his wife are the hosts of the upcoming PBS documentary series on Korean food. 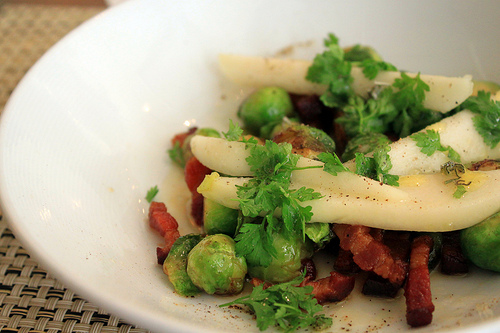 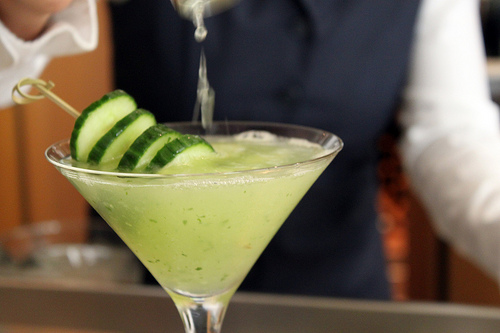 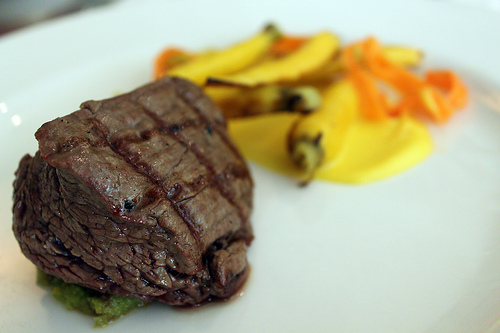 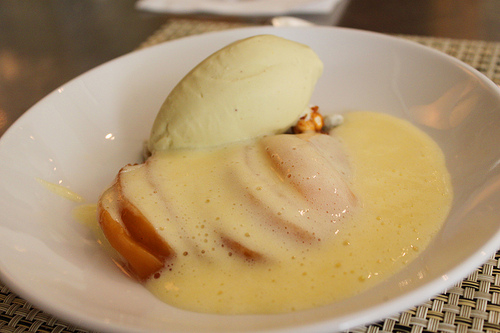 There were some great highlights of the meal, but it was obvious that this was a set up for the tourists, like me, who wanted to tell their friends they ate at Jean-Georges. I particularly loved the little Brussels sprouts with bacon and pear and the Johnny Iuzzini dessert of peaches with a champagne sabayon and pistachio ice cream. But the steak was so overseasoned that it burned my tongue–you know, that feeling you get when you eat straight salt. I also liked the yuzu cocktail and the cucumber mint martini. It felt like something was missing from the martini, and Zach and I discussed it. Then I asked the bartender for a little salt. After adding a pinch of salt, it really tasted good. It just needed a little something to amp up its subtle flavors. 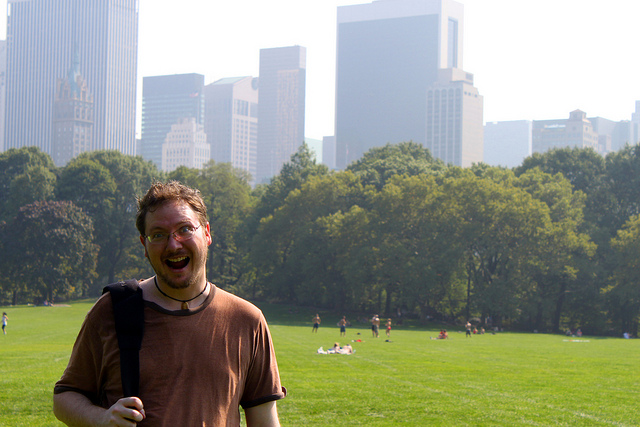 The only touristy thing I wanted to do during my trip was to go to Central Park. So we trekked a bit there. I specifically wanted to see the Dakota Apartments and Strawberry Fields. 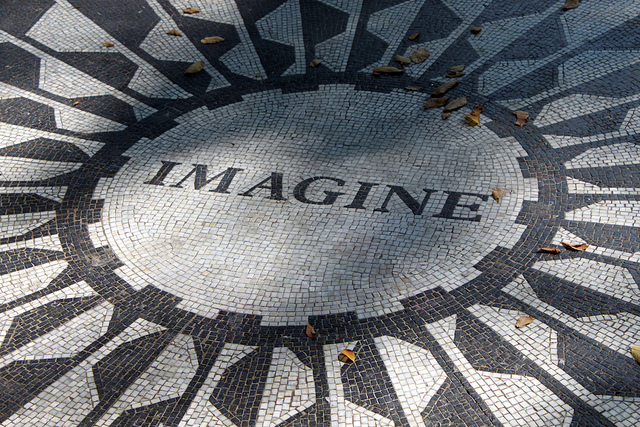 Strawberry Fields was very touristy, but so is Jim Morrison’s grave in Paris, which I also make a pilgrimage to in the early 1990s.

Artist Elaine met us, and we walked through the greens. We were still peckish after that lunch, and David Chang’s new restaurant Má Pêche was within walking distance. As a Korean food writer, I also felt obligated to try out a David Chang restaurant, so this checked something off my list. 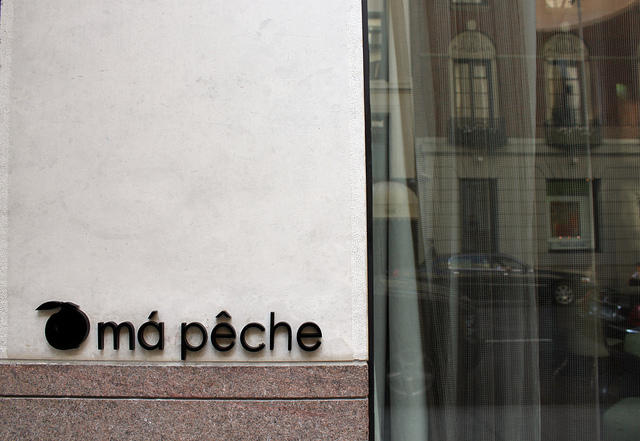 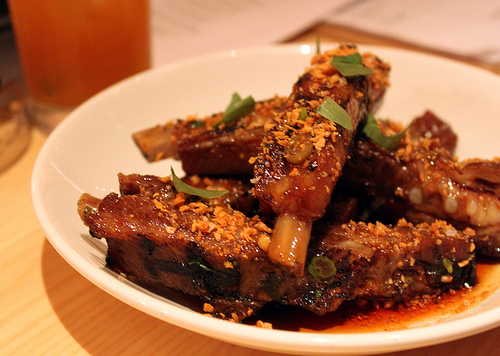 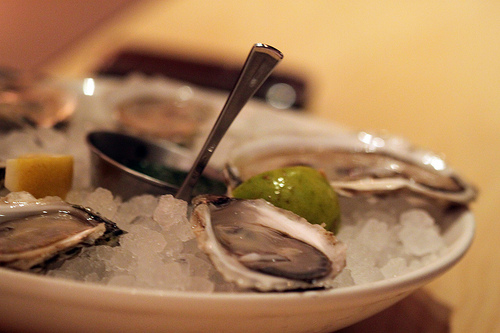 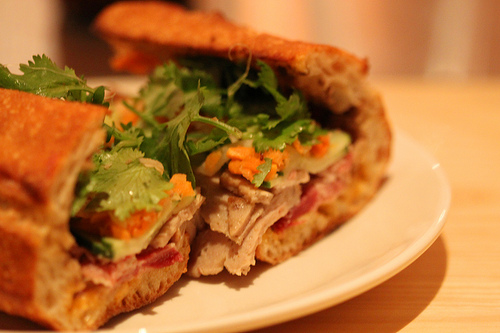 We sat at the upstairs bar and ordered three items, a bánh mi with duck terrine, a variety of oysters and some ribs. The food was good, but it didn’t blow me away–especially when compared to Chef Kim’s food at Star Chef in Seoul. I think we were disappointed in the ribs. Great flavor on the outside but empty in the middle. But I did like the sandwich. So, yeah, I ate at a David Chang joint.

The next plan was to check out Xie Xie, the sandwich place owned by Top Chef contestant Angelo Sosa, but it was closed. So was the pub next to it that Zach wanted us to try.

Luckily, he had a Beer Passport guide, and he knew of another good place for a drink, The Pony Bar. 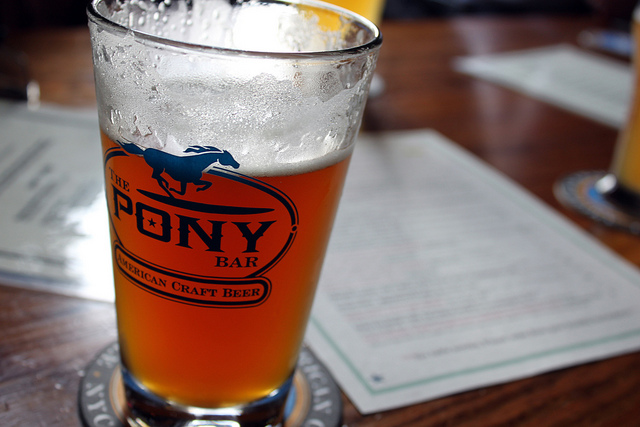 This place specializes in artisan beers, mostly from upstate New York. This is where I had the best beer of my life. On the menu it’s called “Super Friends,” and it’s a combined effort by Ithaca area brewers. A beer so hoppy it smells like a freshly cut pine tree.

That was the end of our little walkabout. I went back to my apartment to shower and rest before the final dinner. Eddie Huang had invited us to check out his new place, Xiao Ye.

When night fell, I walked out into the Friday evening. Parties were starting. I saw the San Gennaro street festival and walked down the road. It had been a very long time since I’d been in a fairground atmosphere like this. Carnies. Grilled sausages. Sideshows.

Xiao Ye is a tiny dark joint directly behind Katz’s Deli. Jonathan was already at the bar, miserable with his cocktail (“It tastes like it’s from the 1980s”). And we waited for the rest of the party to show. 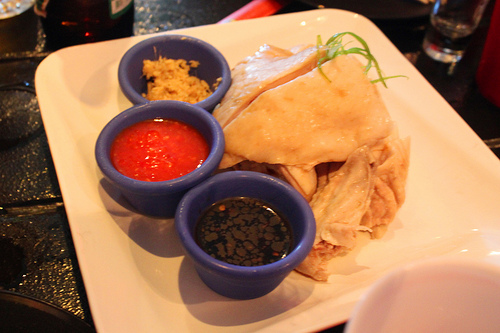 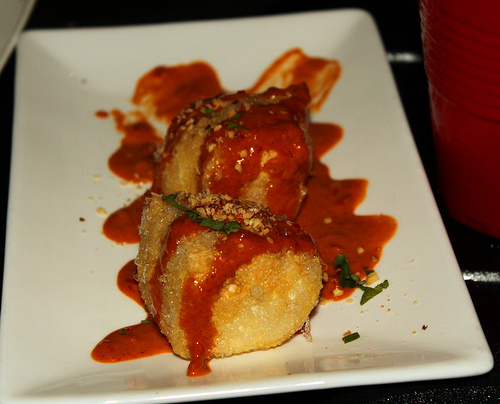 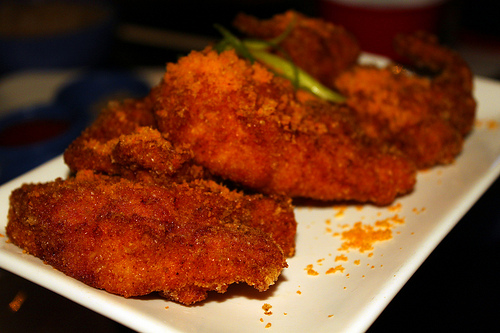 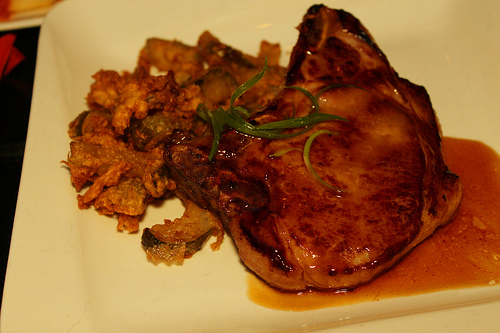 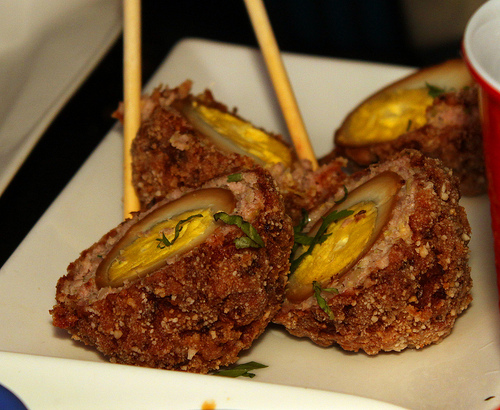 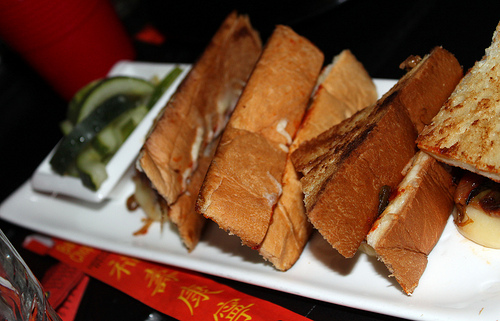 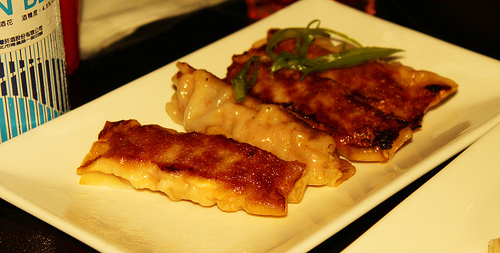 Man, was it cramped and loud and dark. But we still had a good time. Youngsun Lee and his lovely wife joined us. You may remember we interviewed him a while back. This was the first time I had to actually talk to him. We ordered a lot of food, and Eddie gave us a little more. I agree with most every person I’ve read and the Village Voice that the Cheeto Fried Chicken is good, but it needs more cheese flavor. My favorite thing–and I think it was the consensus of the table–was the glazed pork chop with fried “Concubine Cucumbers” (fried pickles). The Hainan Chicken and Rice was also a hit. 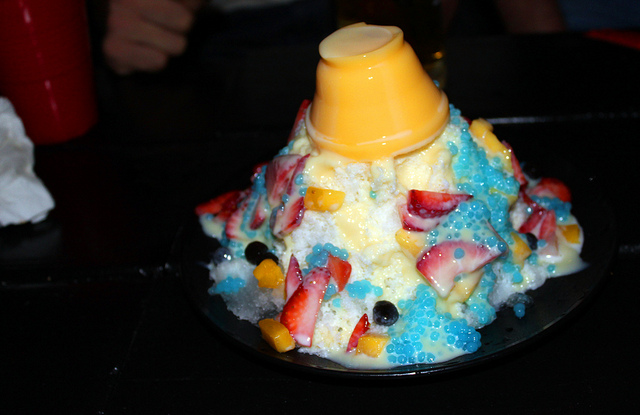 But when they set down their monstrous dessert so ugly only a mother could love–Blue Magic–that’s when I was truly happy. It’s a bing soo. A shaved ice treat that’s all over Asia. But this came with some blue stuff and a precariously dumped mango pudding on top. Electrically sweet. It was gone way before the heat in that place could melt it. “Xiao Ye” means something like “snacks when you’re piss drunk,” and I get the concept. 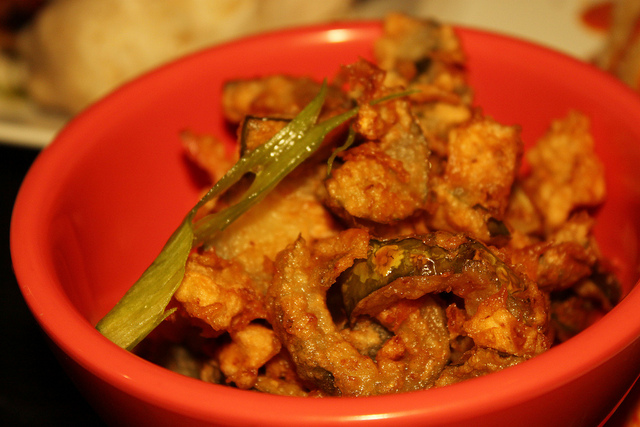 I want to go back for those fried pickles. 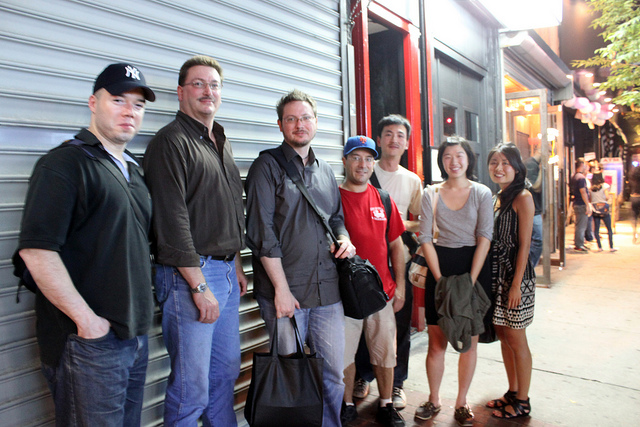 After snapping a final picture of the gang, New York Joe walked me most of the way back to my place. I got back and took yet another shower. It was hot that day. I finished packing and making sure I had all my papers organized. I had an early flight to Huntsville, Alabama. I calculated I needed to get up at 4 or 5 to get to the airport in time. It was 2 when I got in bed. Obviously I couldn’t sleep. So when it rolled on to 4, I got dressed, grabbed my stuff and walked to the subway amidst the dying embers of Friday night parties.

And that was New York.