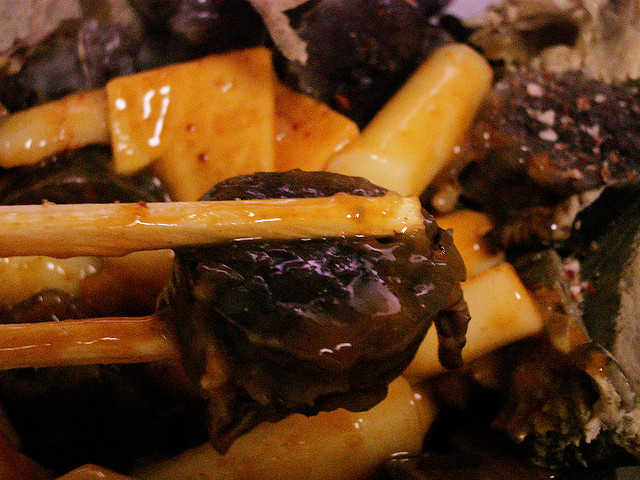 An incident occurred this weekend that was just plain weird but also illustrates a symptom of a continued pattern that is hurting Korea in its desire to be a world class culinary destination.

I’m hardly a snob when it comes to service, or even food. But having worked for years in the restaurant and service industries, I can recognize good and bad service. You could think of this as a continuation of the service rant that started a few years ago. And I only bring this up because it is definitely a pattern and I’ve heard so many other stories.

EJ, who is eight months pregnant, wanted to get out of the house for a stroll around the neighborhood. We walked by our local Home Plus big box supermarket and decided to see what was on sale. While there, EJ was getting a bit peckish. Home Plus has this island of bunshik stalls in the middle of the store, so I suggested we go there and pick up some snacks.

It’s rare that we eat this type of food. But we were both craving something junky. My favorite street food thing is to take sundae and fried bits and pieces and smothering them in ddeokbokki sauce.

While EJ was ordering that, I pulled out a Coke out of a cooler next to the stand to add to our order. The ajumma told me that I had to pay for it at the front checkout counters.

“But you have the cooler next to your stand. I don’t get the logic.”

So I stood in another line to pay for my Coke while EJ got our order. When I returned, I saw that she was arguing with the bunshik ajumma. The ajumma was giving that shallow “I’m sorry” bullshit that I find ingratiating. The robotic tone just sounds like it’s coming from a script, not a genuine apology. And she was also speaking banmal to EJ–the customer–as if she was of lower station or a child.

EJ walked off in a huff with our food and sat down at the noodle bar. I asked what was going on, and she pointed to our food. There was a tiny puddle of ddeokbokki sauce, less than a ketchup packet’s worth.

And she has a point. Ddeokbokki sauce is just corn syrup, water and chillie powder. It’s not some expensive condiment. It’s like ordering a large order of fries and being given one packet of ketchup. And on top of that the employee tells you condescendingly that you only need one packet, not because of restaurant policy but because it’s her personal opinion.

Is it worth it to make a customer feel miserable to save on a smidgen of ddeokbokki sauce? The whole point of ordering the food we did, which was way overpriced compared to a real street cart, was to eat it with ddeokbokki sauce. I’m sorry, but sundae by itself is just a bunch of rubber balls.

I thought I’d order some ramyeon to balance it out.

There’s a WHOLE FREAKIN’ AISLE of ramyeon just over there. You can’t get up and get a pack?

But the Ddeokbokki Sauce Ajumma hadn’t had enough. She left her station to come over and ruin our meal further by interrupting us to give half-ass excuses for her behavior and why she wouldn’t let us have any extra sauce.

EJ: “That’s not an apology. Why do you insist on making me feel like a beggar for asking for sauce?”

Ddeokbokki Sauce Ajumma walked off. I said to EJ, “Let’s just leave. This food tastes bad and now it tastes even worse.”

Then another ajumma came over. She started with the apologies and asked if she could get us more sauce. But it was too late. Then she said, “We have had problems with that employee. You’re not the first to complain about her. She will quit today.”

Oh, I was not expecting that. But it put a smile on EJ’s face. And seriously, why would you go out of your way to give stress to a pregnant woman? Over ddeokbokki sauce?

This is the root of the rot that infects Korea’s restaurant culture. The customer is not only not right, the customer is a child that should be talked down to and ignored whenever possible. Restaurant personnel don’t take the extra steps of thought to figure that an extra spoonful of ddeokbokki sauce is worth it to keep the customer happy. Because no matter how much of that late apology was dished out, we will always have sickening feelings about eating at, and even shopping at Home Plus. If I even tried anything close to this when I worked in the industry, I would have been fired on the spot for the first offense.

This is like the woman in the other story who felt that even though it was on the menu, we were not worthy enough to have what we ordered. Her restaurant didn’t last very long.

This is not always true, we know. And the charm of little sikdang and grill joints is the gruff waitresses that give you extra banchan. But there is a pattern in corporate, western and white tablecloth restaurants where there is no concept of basic customer service. This is something that should be in the training. Basic stuff like, don’t speak banmal to a customer. Don’t walk away in the middle of taking down a food order. In fine dining, don’t interrupt a conversation to put a spoon on the table.

Yeah, I feel that the phrase, “The customer is always right,” can be dogmatic. It’s more of a guideline. But you’re not going to go very far with a country of Soup Nazis, or rather, Ddeokbokki Sauce Nazis.

Am I off base here?