Eric Ripert is in Korea. This is just after it was announced that Le Bernardin maintained its three Michelin stars and was again voted “Best Restaurant in New York City” by Zagat. He’s traveling with Matt Rodbard (Korean Restaurant Guide New York) for a piece in a major American food publication. On Sunday evening, I had dinner with them at YangMiOk 양미옥–a dinner of cattle innards. YES! 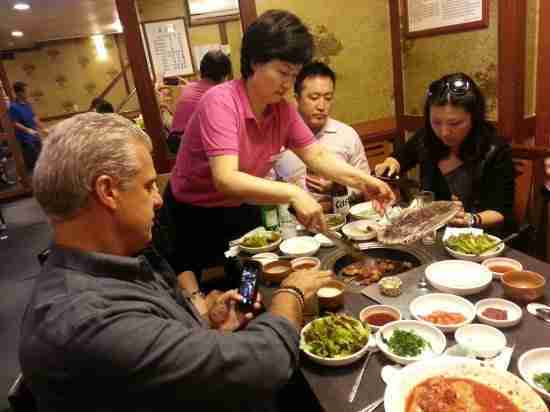 I was so giddy that this was the only picture I took of Chef Ripert. During dinner, I was trying to act all nonchalant, which just made me sound dumb. We sat next to each other, and I was so nervous to talk to him. I mostly talked to Matt, who is an amazing dinner companion.

When they were choosing what to drink, I asked if they had any dong-dong-ju, which they did. The mini-pot came out with the cloudy bubbly liquid. We filled our bowls and toasted.

“This reminds me of champagne,” said Eric.

We downed a good many beers and sojus following that. Eric made a Vine of the lovely intestines.

He had learned about Buddhist temple cuisine the day before, and he was ecstatic about it.

After dinner, we headed to Gwangjang Market. It was Sunday, so it wasn’t as crowded. But we did have some soondae, ddeokbokki, and various innards. Eric particularly liked the hogs jowls dipped in ddeokbokki sauce. The ajumma at the stand motioned us towards a bubbling wok of meatage and goaded us to try it. I was the only one to do so. We asked her what it was, and she pointed to her chest and breathed heavily (I have that effect sometimes). I figured out she meant that I was eating lung. And it wasn’t that good.

We moved on to some bindaeddeok, one of my favorites. We downed that with some road beers. Eric was texting on the phone and showed it to me.

“Who are you talking to?”

As most of you know, I’m a serious fanboy of chefs. It was more than enough to be within breathing distance of Eric Ripert. But Anthony Bourdain I partially credit to my being in Asia. It was in 2003 that I spent my Friday nights at home just to watch at 20-minute episode of his first show, “A Cook’s Tour.” At the time, I was struggling to stay afloat amidst a divorce and the dot-com bust. One of my friends was beckoning me to go to Korea. After a few episodes of “A Cook’s Tour,” I said, “Screw it. I need to get my butt to Asia.”

My first year in Korea was a bit on the lean side. When I was able to get a secondhand computer, one of the first things I did was get my hands on as many “Cook’s Tour” episodes as possible. It comforted me. It gave me a frame of reference to help survive as an expat in Korea. It’s so easy to fall into a dark pit of negativity here. But the cynical swaggering gusto that Bourdain captured in those old episodes kept my brain in the right space.

So I said to Eric, “Tell Bourdain that he’s the reason I moved to Asia ten years ago.”

They wrapped up, and Eric went back to the hotel. He signed my copy of On the Line, gave me a hug, and went back in the van. I grabbed taxi to hang out with Matt and the gang.

Eric and Matt even stopped on over to visit our friends at Vatos Urban Tacos. 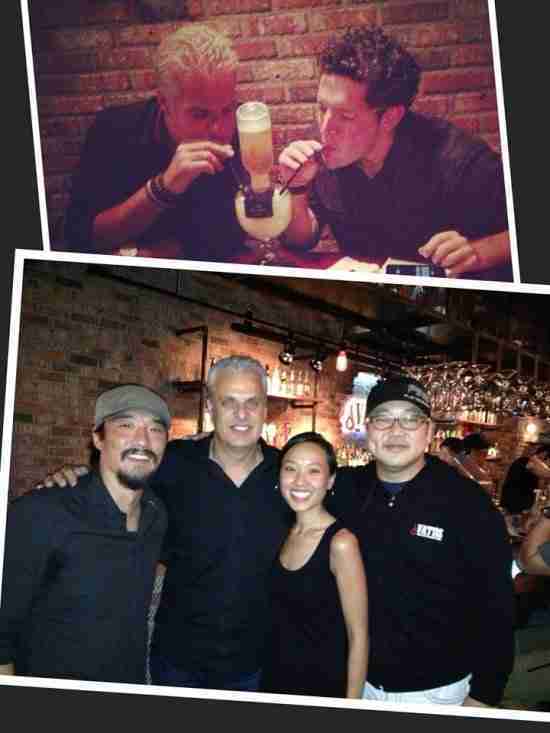