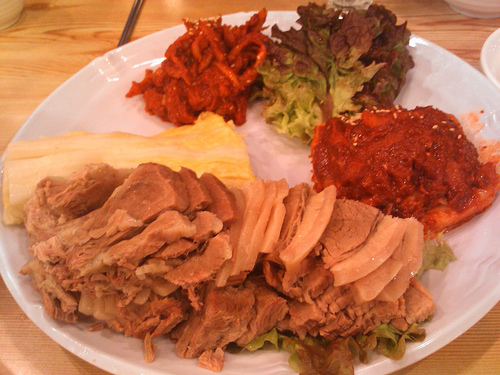 The New York Times has a scrumptious piece showcasing David Chang’s recipe for bo ssam (“The Bo Ssam Miracle”). It’s gorgeous. I’ve heard it tastes great. And I would love to try it myself.

I also see why some of my friends hate David Chang. I thought it was that they were just being stubborn Korean food purists, if there is such a thing. The fear, though, is that people will start thinking that David Chang’s interpretations of Korean food are traditional Korean food. It brings to mind when New Yorkers come to Korea and expect Korean fried chicken to be like Kyochon and not like Two-Two and BBQ when Kyochon is really the only major chain to make chicken that way. Or when Koreans think that real Italian pizza comes with canned corn, sweet potato mousse, and sweet pickles on the side.

In essence, David Chang’s bo ssam is to Korean food as the California roll is to Japanese. It’s inspired by Korean cuisine and could later be considered part of the edges of Korean cuisine, but it’s not Bossam 보쌈 that you’d find in Korea.

Let’s get through the similarities. David Chang’s bo ssam is a pork shoulder. Korean Bossam comes from moksal 목살, which is from the back of the neck. So they’re close together in porcine geography. Both are highly flavored and served with kimchi and condiments to be wrapped in lettuce leaves.

Then they diverge. David Chang’s bo ssam is roasted, which actually sounds good. Korean Bossam is boiled. Ovens are about as common in Korean households as rice cookers are in American. Roasting and baking are not common Korean cooking methods. The mention of boiled pork may turn a lot of people off, but Korean Bossam is highly flavored and delicious. Chang’s bo ssam comes with raw oysters (YUM!). Korean Bossam may come with marinated oysters or with oysters in the kimchi, but usually not. It has ssamjang and tiny pickled shrimpies. Kimchi for Bossam is markedly fresher and fruitier than most kimchi.

To clarify, I tend to defend David Chang amongst Korean food purists. I’ve eaten at one of his restaurants, and I loved the food, and I love what he’s doing. I consider a lot of his dishes to be Korean food–or rather–Korean-American food. The NYT article, though, opened by implying that traditional Korean Bossam is roasted pork shoulder.

Another misnomer I’m hearing bandied about is the use of ssam as a dish, as in, “Let’s go out for some ssam!”

Ssam 쌈 is from the verb ssada 싸다, which means “to wrap” in this sense. When you wrap your morsels in leaves, that bundle is ssam. But you don’t hear people talking about eating ssam like it’s a food category. You eat Bossam or SsamBap. You don’t eat ssam. Like you go out for pizza, not “slices.” It’s prissy semantics, but it sounds as awkward to me as “french fried potatoes,” and “hamburger sandwich” and, in Korea, the tendency to call sandwiches “sand.”

So to clear up, in the Korean cuisine you’ll find in Korea, Bossam is boiled pork, not roasted (and it’s sometimes other things like smoked duck). And ssam are the little wrapped bundles, but not a food you go out to eat.