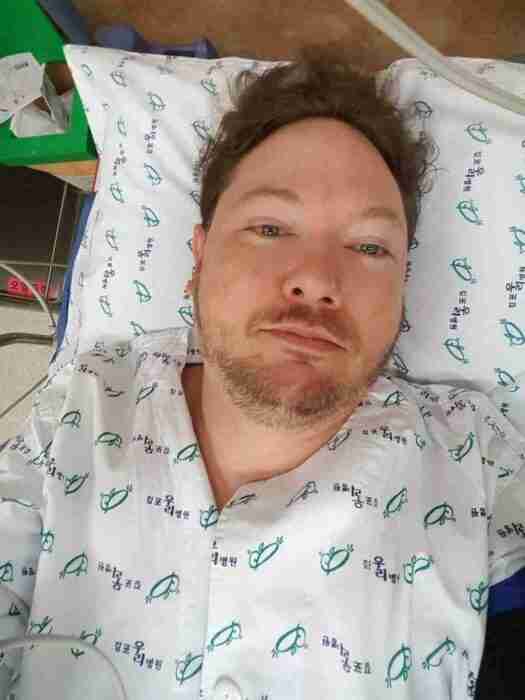 WARNING: Graphic photos ahead. Not to be perused while eating.

It’s already been a, well, challenging year. I’ve had two life-learning experiences in running restaurants in Korea. I’ll go into details about those later. My consolation was that my tour business started booming this year. October is peak season. On October 1st, I had 19 people signed up for our popular Dark Side of Seoul Tour. I went to Daiso with my daughter Jian to get some supplies for that tour. We climbed the stairs to the second floor.

I started feeling lightheaded, and I could see tracers. I knew something was coming. I remembered telling Jian that I needed to sit down.

The next thing I knew, paramedics were reviving me, and my sweet five-year-old daughter was standing over me, in tears. My wife had just arrived. They put me on a stretcher, painfully, and put me in an ambulance. I was totally disoriented. I didn’t know what day it was or where I was. I had passed out once in 1995, and this was vaguely reminiscent of that. The paramedics told me I had a seizure. I had sat down and seized up, with blood foaming from my mouth. I felt my tongue, and there were two deep bite marks on the sides. 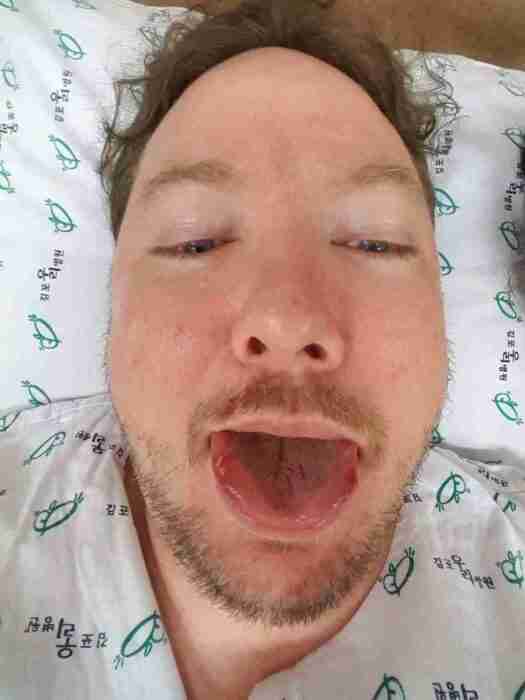 When I got to the emergency room, I asked someone what day it was. They said Saturday.

Crap! I have a Dark Side tour tonight!

It didn’t look like I would be released before then. I opened my phone and copied the email addresses of that night’s attendees. I sent an email about the situation.

My wife and daughter arrived. My daughter stayed by my side and acted as interpreter (so proud) while my wife dealt with triage. I got stuck and prodded. Got an IV in me and a lot of blood withdrawn. Jian was brave and mature. She was fascinated by the blood withdrawal. I used that as an opening to discuss career options.

After a couple hours, I was moved to a shared room on the seventh floor. My muscles were in pain from the seizure cramps. My back was in the most pain. I couldn’t move. I had to pee into a pitcher. I was really upset about this situation. I was even more upset when I found out some of my emails didn’t get through, and there was a group at the meeting point waiting for me to start the Dark Side tour. I explained to them what was going on. They were cool about it, but I feel horrible about them going there. 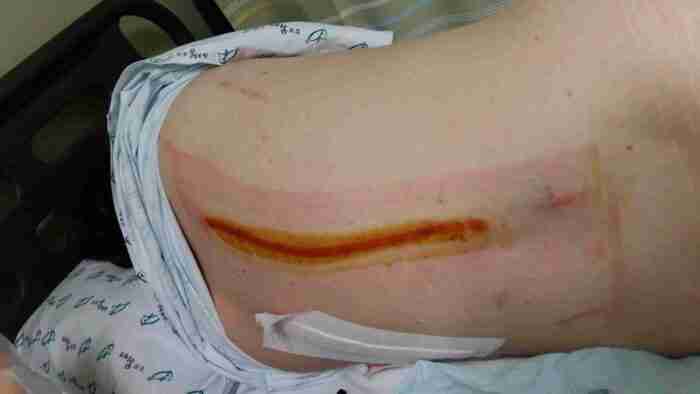 Back was pretty fucked up

The pain in my back was unbearable. I screamed a lot whenever I tried to shift. I kept asking the nurses for stronger pain meds. They tried. They considered giving me morphine.

The next day, Sunday, I felt a little better. My muscles were recovering, but my back was still bad. I was able to sit up and even walk around. But I had to move gingerly. I had gotten an MRI and CAT scan the previous day. They said I didn’t have any brain damage or tumors. I was scheduled to get another MRI on Tuesday. 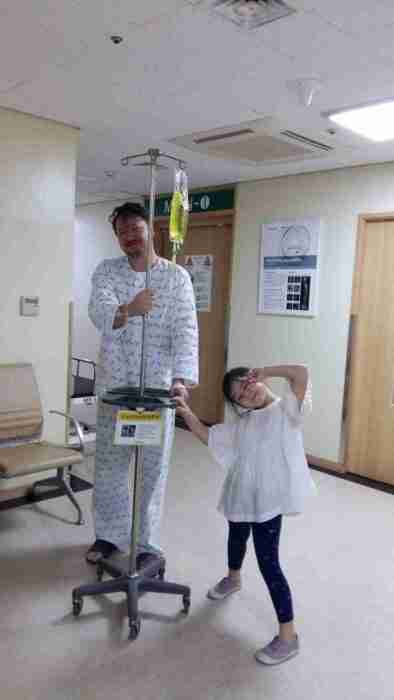 This is the part I’m a little miffed about. This being a holiday weekend, I didn’t see a doctor, a specialist, or get any treatment for my back for three days. I guess the doctors were all off on holiday. You know, maybe the hospital could have sent me somewhere else where the doctors weren’t absent?

After the MRI on Tuesday, where they painfully transferred me on the table and back by lifting my sheets and slamming me down, the doctors found that I had compression fractures in my spine. My 14th and 15th vertebrae were cracked. I’ll need to wear a brace for three months, but thankfully, I won’t need surgery, and this will heal. I likely am a bit shorter now, though.

So before, where they didn’t care about the pain my back was in and how serious my condition was, they are now making me stay in bed. They don’t even want me to get up to use the bathroom. I’m saying, no, I’m going to get up to use the bathroom. The doctor chastised me for sitting up in bed. I’m like, “Well, where were you three days ago? I hope you were enjoying your time off.”

I’m not bitter about my friends. Everyone has come out and been supportive. I’m so thankful. My friend/neighbor Gareth stopped by. Marie and Minji from my Korea Food Tours team came and gave me a great care package. They’ve been covering for my food tours this week. Marie and Minji are trying to learn the Dark Side tour so we won’t have to cancel them this month. EJ and Jian–I have the best girls. 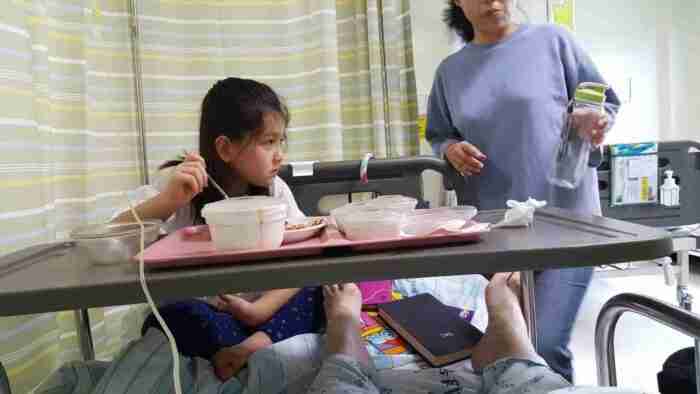 EJ has suddenly gotten good at making sandwiches, so she’s been feeding me. The hospital food has been hit and miss. It hasn’t been as bad as you’d think. The chicken galbi was good. 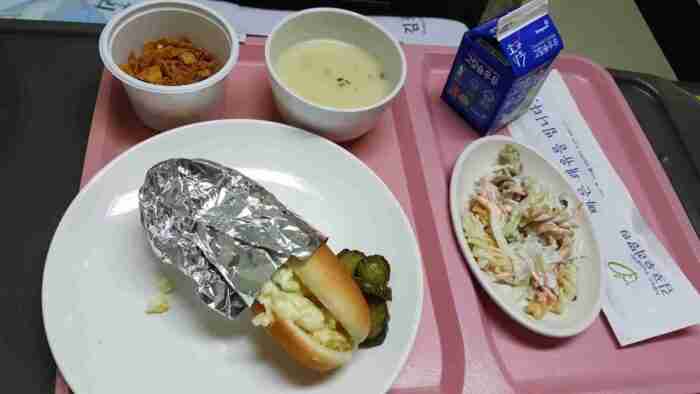 But their attempts at western food have been gross. A hot dog bun filled with potato salad, accompanied by rotini pasta drenched in mayo and a cream soup that came from a powder. That was yesterday’s breakfast. The only reason I got it was that it included cereal. The head nurse was miffed that I didn’t eat it.

While I was just writing, one of the doctors came by to give me an update. He’s a kind guy. He got on to me for sitting up. But yeah, I’ll be in a brace for four months. I need to stay in bed for a few weeks. I’ll get my brace today and will get an X-ray tomorrow before being discharged. I have an appointment with some “celebrity” doctors at Severance Hospital next week for some second opinions. So far, it looks like my brain has recovered, and it’s likely this seizure was a one-time thing. Now I need to let my back recover, which will be until the end of this year.

Crap! What a year! Haha!

I’ve been home for a few days. I’m getting used to everything. It’s easier to get around, but it’s still painful to transfer between sitting and standing positions. We are going to Severance Hospital tomorrow for second opinions from some rock star specialists. The main doctor I talked to at Gimpo Woori Hospital was nice and compassionate. And the nurses were cute and paid attention to me after EJ gave them a good earful. But I really question my stay there. I still have no answer as to why I didn’t see a doctor for three days or wasn’t transferred for more immediate care. I also have no answer as to what to do about it. Korea isn’t really a litigious culture, so I get brushed off by my wife and Korean friends when I mention that we investigate this.

EJ got the CCTV footage from Daiso. It took me a while, but I was able to convert it into a file format we could actually use. I avoided watching this until it was absolutely necessary. I didn’t want to see it. Who wants to watch themselves lose control like that? You become a stranger to yourself. What’s most disturbing is that my daughter witnessed the whole thing. Oh, and the shoppers who just continued shopping until they saw something serious was going on. I applaud the workers at Daiso and am thankful to them for taking control of the situation and taking care of my daughter. I know it’s humiliating to post this publicly, but at this point, I have little to hide.