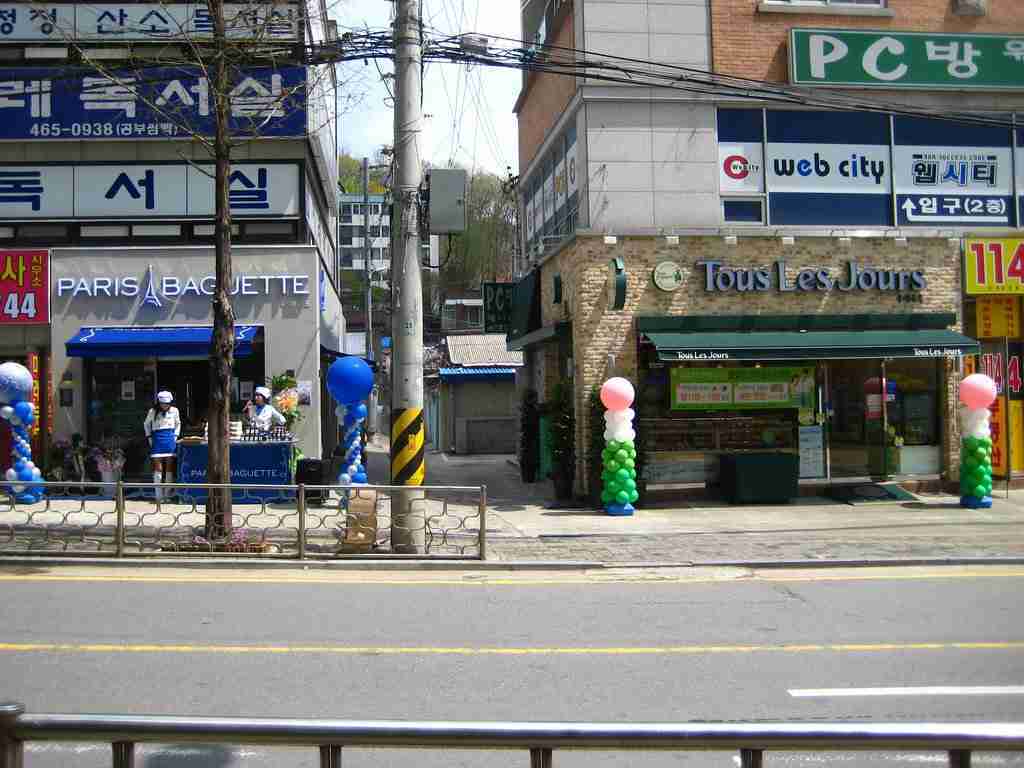 Paris Baguette and Tous Les Jours next to each other. A common site in Korea.

I had heard that this was in the works. It was announced at a press conference last night. I should note that the foreign press was not invited, so it has appeared in the Korean dailies before the WSJ and other international outlets.

Basically, the news is that the big food conglomerates are being put on a leash and tied to a tree. These conglomerates include Lotte Group (Krispy Kreme, Lotteria), CJ Foodville (VIPS, Cold Stone, Tous Les Jours), E-Land Group (Ashley), and SPC (Paris Baguette), along with some smaller groups like Nolboo, Won Halmeoni, Bon Juk, and Sae Maul Sikdang. Funnily enough, Outback Steakhouse is also included in this. Surprised I didn’t see Starbucks and Caffe Bene in there–especially when you’re talking about protecting mom-and-pop SMEs.

The biggest hit are the bakeries, specifically Paris Baguette and Tous Les Jours. They can’t open new stores within 500 meters of existing mom-and-pop bakeries. And they are only allowed to grow two percent a year. It’s also asking non-food conglomerates to not enter the food industry. I think that was specifically aimed at Samsung family members getting into the coffee and bakery business, which was broken up last year.

Some funny stuff I read in those articles.

“We have already sustained losses due to the regulations by the Fair Trade Commission, which forbids bakery franchises from opening new shops within a 500-meter radius of an existing bakery under the same brand,” an official from CJ Foodville said. (source)

This is all coming about because, with the conglomerates entering so many diverse industries in Korea, that those industries are the only places left for entrepreneurs. The conglomerates use their big pockets to buy up prime locations and sell their wares at a loss, driving out any mom-and-pop competition. You know, the Wal-Mart model. Which also makes this complaint sound funny.

CJ said the government’s attitude conflicts with its sincere efforts to globalize Korean cuisine by expanding its business overseas. (source)

This is a curious development, and I wonder how this will work out. The rule about closing large supermarkets on certain Sundays that went into effect last year is rather stupid. It reeks of the usual slapdash regulations Korean Immigration throws together to appease the public. But this recent rule, which goes into effect next month, is quite aggressive.