Another Copycat, This Time in L.A. 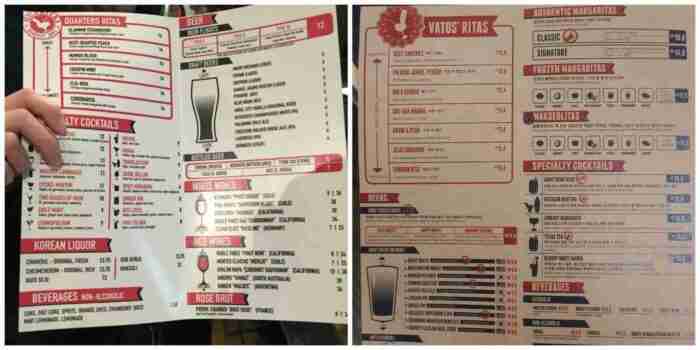 Soon after Vatos Urban Tacos opened and became a hit, people from rival restaurants showed up, vigorously taking pictures of each detail for “research” and “benchmarking,” business Konglish for “straight up ripping off and copying.”

A few months later, dishes that never existed on Korea’s shores until Vatos made them magically appeared in other restaurants around Seoul. That’s to be expected in the industry with a successful restaurant, especially in Korea, where copying can sometimes be considered a cunning skill rather than shameful theft.

This popular Korean BBQ restaurant in L.A., Quarters Korean BBQ, felt it was okay to benchmark the overall design of the Vatos menu all the way down to individual graphic elements. Yes, they’re not doing anything illegal. But they should be aware that it is a shameful practice. Copying isn’t always the highest form of flattery. It can also be lazy and cheap. And if a restaurant is going to be lazy, cheap, and unethical about menu design, who knows how it behaves in the kitchen?

If this bothers you…

Make it known to their management.

Ah, and remember Meat & Bread (the original) vs. Porchetta? The former winners of the benchmarking Olympics didn’t see any dent in business when people found out. But their poor service and food did that for them.