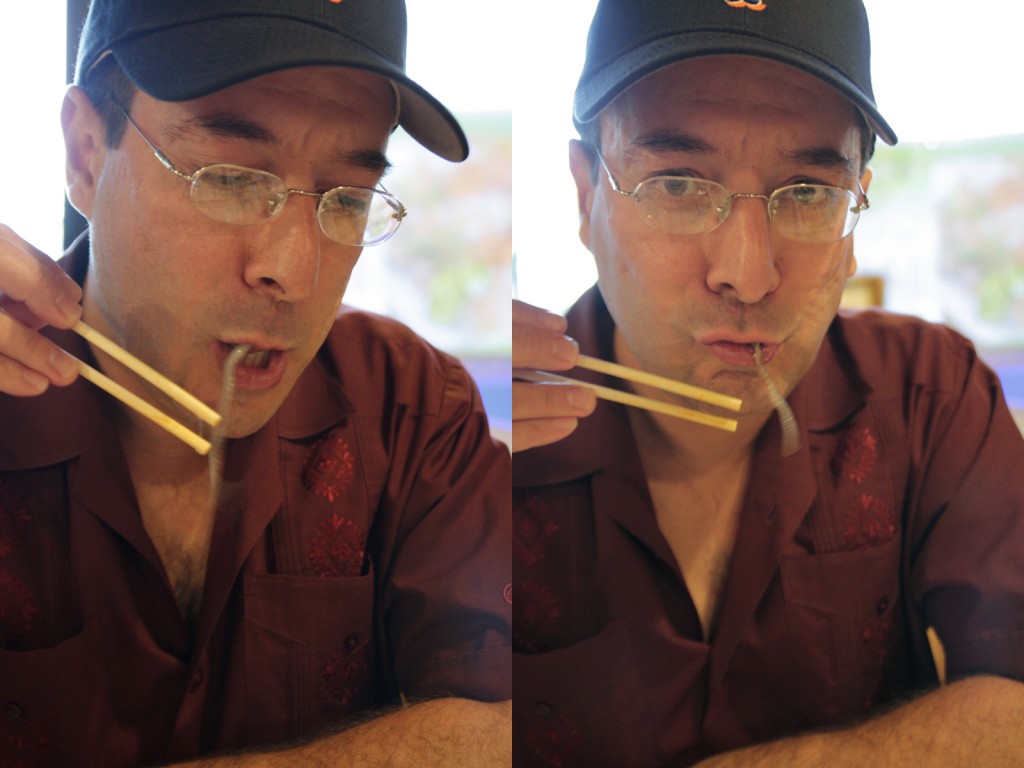 Queens-based food writer, Joe DiStefano has been exploring the borough’s diverse food offerings for more than a decade and has been called “The Guy Who Ate Queens” by New York Magazine. DiStefano writes for the print publication of Edible Queens and is the editor of Edible Queens’ food blog, World’s Fare, which chronicles whatever happens to be on the end of his fork, or chopstick, as the case may be. His work has also appeared on Ed Levine’s food blog Serious Eats New York and The Village Voice’s food blog, Fork in The Road. If you’re in New York City on Labor Day be sure to check out Joe and the other panelists at the Asian Feastival, a one-day culinary festival that celebrates the diversity of Asian foods in Queens.

Joe was kind enough to talk me (other Joe) about Queens, lots of foods that I’ve never heard of, and the antics of Tony Bourdain and Eric Ripert.

1) You’ve become known as sort of an Asian food foodie. Do you remember what drew you to this calling?

Say it ain’t so Joe, I hate the f-word, but I am fascinated with Asian food and have been since I was a young boy. We had an Indian neighbor who baked crispy, savory disks studded with ajiwan seeds and black pepper; I couldn’t seem to get enough of them. There were also regular trips to Manhattan’s Chinatown. I have many fond memories of being boosted up to peer through the steamy window of a Cantonese restaurant to watch char shiu pork being hacked up with a cleaver. That, Wo Hop, and almond cookies. The regional Chinese wonderland that is Flushing’s Golden Shopping Mall and that squirmy delight san nakji are, of course, a far cry from sticky spare ribs and almond cookies. It was really living in Queens that turned me into a full-fledged Asian foodie. Having dozens of Asian cuisines– Chinese, Pakistani, Korean, Indian, Thai, Indonesian, Malaysian, Filipino, Nepalese, Tibetan, Burmese, even Central Asian kebabs and Silk Road fare from the former Soviet Union–just a subway or bus ride away really opened my horizons.

2) So, Queens. Why would a visitor want to go there and what should they not miss?

Well, apart from such wonderful non-food related attractions as Citifield, the Queens Museum of Art, and the World’s Fair grounds in Flushing Meadows Corona Park, I think the appeal of Queens can be summed up in one word: culture. And by that I mean cultural diversity, which brings us back, of course, to food. The Ganesh Temple on Bowne Street is a prime example. It’s a two-story structure devoted to the elephant-headed god. The Temple Canteen in the basement serves up some great vegetarian Indian food, including crisp foot-long dosa slicked with ghee and filled with curry-scented potatoes. Should their dosai and other veggie specialties prove unsatisfying Dosa Hutt is just next door. I can’t say enough about Golden Shopping Mall, the warrenlike collection of miniature Chinese restaurants that encompasses everything from the fiery Sichuan fare of Chengdu to the scented lamb dishes from Xi’an in Northwest China. For a taste of old school Queens hit the Lemon Ice King of Corona. Walk to nearby William F. Moore, a.k.a. “Spaghetti” Park, and watch the locals play boccie while you slurp away. Nearby find Tortilleria Nixtamal a tortilla factory and restaurant that makes its masa the old-fashioned way, by grinding seed corn.

4) How was it hanging out with Anthony Bourdain and Eric Ripert and a live octopus?

It was a real hoot. It was my third time eating san nakji, so I wasn’t too fazed. It was great fun watching Bourdain egg on his Buddhist pal Ripert and our photographer both whom had never tried the delicacy before. Tony recommended Japanese culinary manga Oshinbo to Ripert. I just finished the first volume; good stuff.

5) Two-parter–What’s your ultimate comfort food and what is the most exotic food that you want to try?

My ultimate comfort food is a Tibetan dessert called Bhaktcha Markhu, it’s a handmade pasta topped with roasted barley, sugar, and butter. It really reminds me of the cavatelli with ricotta and sugar that my Mom used to make. That second one’s a bit tougher as I’ve tried everything from Peruvian roast guinea pig to Japanese codfish sperm. Despite the fact that the sight of it might make me wretch, I want to try that Sardinian maggot cheese. I hear it’s tasty.