When planning the dinners for the rest of the week, we thought it a great idea to do a homemade meal using Ben’s kimchi from Tuesday.  This was the biggest day for everyone.  Dad and Anita woke up early to make the DMZ tour at 7.  Ben woke up early to meet Veronica Kang for a full day of training in Korean food at the W Hotel.  Mom and Brian… well, they don’t wake up early.  But they were planning to help with the final big dinner.

I also woke early to make sure everyone was where they needed to be.  And they were.  Ben was able to get a full day training under Cho Hee-sook, one of the top experts on traditional Korean food and former executive chef of the Korean embassy in Washington, DC.  We had been trying to find a kitchen for them to train in, and she had found one at the W Hotel.  What a great coincidence because Ben had wanted to see the W Seoul, and I had wanted him to meet Chef Ciaran Hickey, the executive chef of Kitchen at the hotel.  You may remember him as the creator of the 180,000 won X Burger.

I sent an email to Ciaran to tell him Ben was coming.  It turned out that he and the staff had learned of a chef coming to the private kitchen at the W, and they were going mad speculating who it could be.  They thought Ben was Pierre Gagnaire! 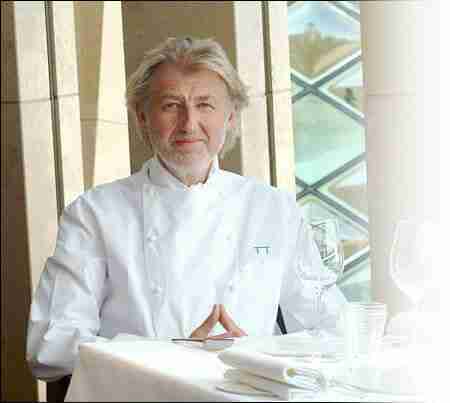 I still don’t know the details, but it looked like Ben really hit all the basics of Korean cooking.  Chef Cho took the example of bibimbap and used each element as a lesson in different techniques.  The staff at the W was in awe of Chef Cho.  She’s a pretty big deal.  Ben said Chef Hickey commented on how scary it was that I had connections like that.

EJ and I did more housecleaning.  Mom and Brian showed up around 2.  We left the apartment to go to the store.  On the way out, our neighbor’s little kids said hi to us through their screen window. 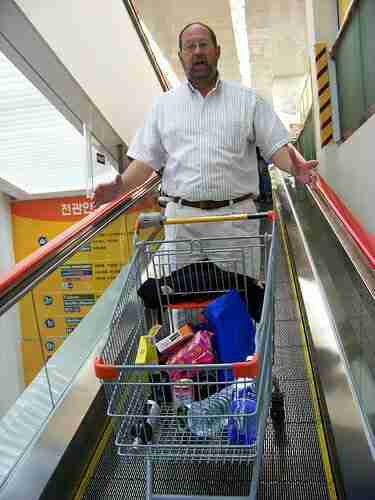 E-Mart proved to be a great way to experience Korean culture.  Mom and Brian had a good time exploring what they had to offer.  They looked for quirky candy souvenirs to take home.  Unfortunately, no Ricetards to be found.  Downstairs in the grocery section, Mom and I went around sampling things.  She had the idea to make an Asian coleslaw, something I liked in the ’90s.  While sampling, she tried a little sample salad of kelp noodles with (what we think were) taro shaped like pink salmon caviar.  The dressing was a simple mayonnaise, like potato salad, but she liked the texture.  The noodles and taro pellets weren’t too expensive either.  The lady told me (in Korean) how to make the salad, which again, was like a potato salad.  So we looked for the other ingredients.

In the meantime, we tried more things, like Misutgaru.  She actually liked it.  Brian was tickled to see a bottle of Heinz Chili Sauce.  They told us of a rice oil that’s getting popular in California.  We found a bottle of it, and they bought it.  I hadn’t eaten lunch, so I greatly enjoyed the free samples of Haemultang, beef and Dalk Galbi. 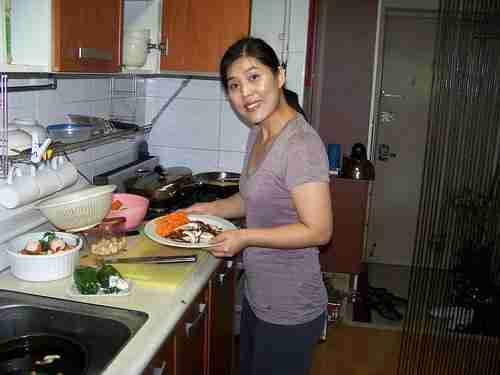 EJ started work in the kitchen.  Mom wanted to help, but EJ said that she was a loner when she cooked. 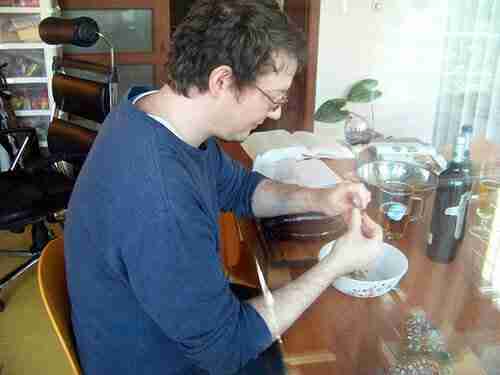 I started peeling ginger in the living room and making my stuff.  We caught up a lot in conversation.  EJ has this sense where she knows when I’m in the middle of something because that’s when she pulls me away to do something else, like pound garlic. 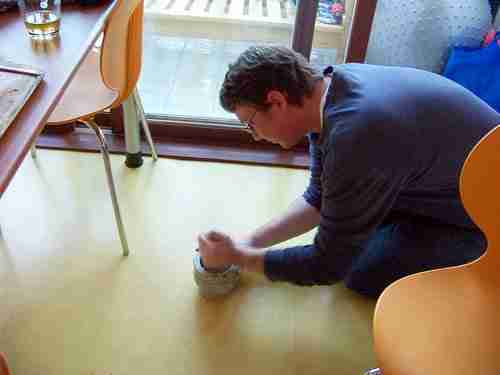 I got the eggplant started, and Mom and I improvised the Kelp Noodle Salad.  The sun set beautifully, and the others started arriving.  Ben got a little lost on the subway carrying the end products of the day of foodmaking.  He found his way, though.  Dad and Anita showed up for cocktail hour.  EJ had the Galbi Jjim going in the rice cooker, which doubled as a pressure cooker.  She wondered if she was making too much.  She then finished her Japchae.  She placed an order for Two Two Chicken for 7:30.

By then the beer was running low, so I got ready to go on a beer run.  EJ went with me to get some wooden chopsticks and a cheesecake from Paris Baguette.  We got the cheesecake, beer and chopsticks and were on our way home when Ben called.

“Um, Joe, the rice cooker exploded and blew out the power.  Where’s the fusebox?”

I told EJ that we needed to hurry back.  I thought that Ben was joking, but I looked up and saw that the apartment was dark.  When we got there, the family had found and lit some candles.  I showed where the fusebox was, and the lights were restored.  They had already put a towel around the rice cooker and unplugged it.  It didn’t really explode.  It’s programmed to release the pressure at a certain time.  Instead of steam, it spewed pork rib gravy into the air.

EJ was frantic, wondering if the ribs cooked okay.  I figured that if it was time to release the pressure, they were already cooked.  She transferred them to the stove just to be safe.  I wiped down the rest of the mess.  The chicken arrived, and we started setting the table. 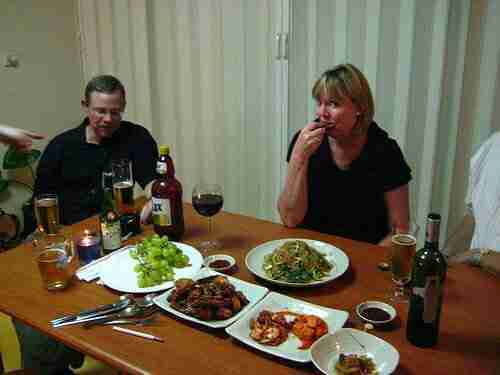 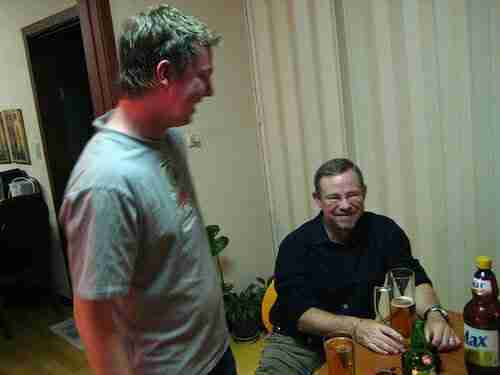 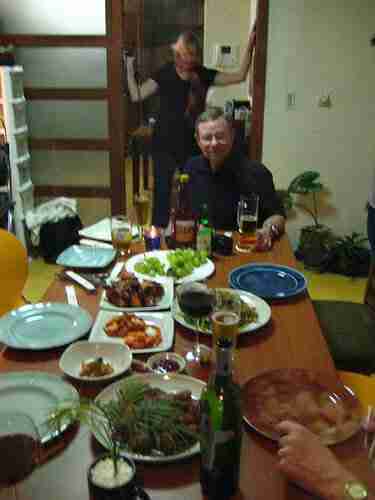 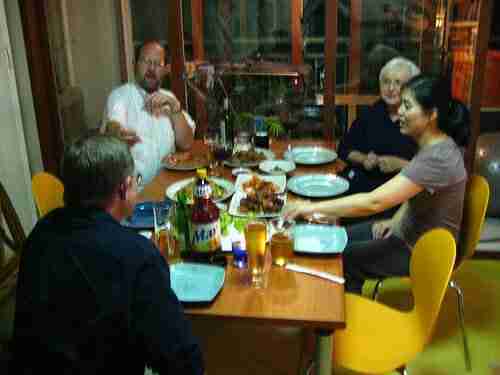 It was a true feast, and everyone ate a good portion of it.  Brian seemed to like the chicken, and the others liked the Galbi Jjim and Japchae.  Anita commented that the Galbi Jjim tasted like a Sunday pot roast.  That was so true.  Ben’s bright crispy kimchi matched the rich chunky stewed ribs.  Mom’s salad was pretty much gone.  The Japanese eggplant, though soft, got good reviews from EJ and Anita.  Everyone got along well, and it was a great end to a great trip.

We explained to the parentals the details on how to get back to the airport and how to drop off their phones.  Mom was too busy hugging and kissing EJ to pay attention, and Dad was relaxing with a beer, truly enjoying himself.  I noticed Dad and Mom having a good heart-to-heart talking about how even though they didn’t work out as a couple, they really had unique journeys together and made great kids.  Mom then returned to smothering my wife with hugs.

The sisters got in touch with us through Skype and joined the party.  There was some talk of pulling all-nighters, but we thankfully though better of it.  EJ called taxis, and everyone filed out.  There was an impressive aftermath of dishes and leftovers.  EJ and I sat down to talk about the evening and to plan the next day.  We then noticed that the sisters hadn’t hung up on Skype, so we talked to them.  I told EJ to wait to the next day before we started cleaning up.  We needed to get up early.