Ben and I had to get up early and get into north Seoul, the Jongno area (Jongno 5 ga), for a kimchi making class at Soodo (not Pseudo) Cooking College at 10.  I didn’t sign up for the class.  It was just for Ben.  So I killed some time.  First I found a little coffee shop and ordered a coffee and waffle.  While there I made a map for Ben’s second cooking engagement that day.  I feared that the scheduling would be cutting too close for me to be in many places at once.

Here’s how I scheduled it.

It didn’t quite work out that way, but it did work out.  While Ben was in class, I went to Changdeokgung and bought the tickets.  I returned to Jongno 5 ga and waited in a park, listening to some podcasts.  Dad and Anita were on their way to Jonggak Station to explore Jogyesa. 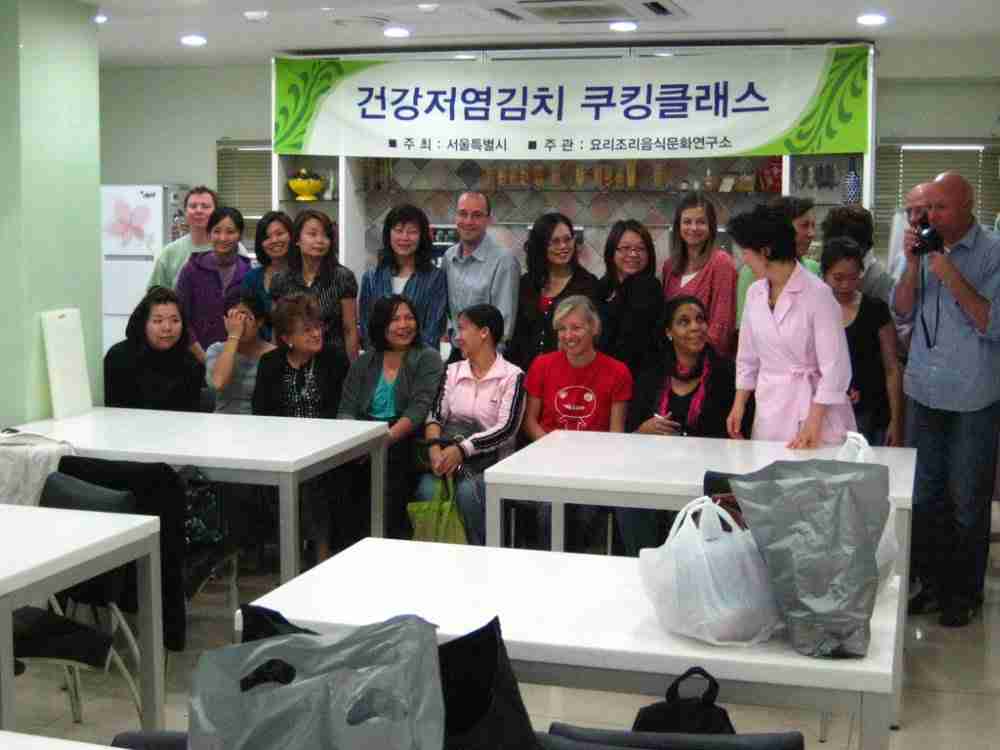 I went upstairs in the cooking school right when they were finishing their kimchi.  Ben had met the daughter of the academy owners and found that she went to the Culinary Institute of America in NYC with a few of Ben’s friends.  I sort of recognized a bald headed guy there and tried to figure out who he was.  Ben later said that he was a real asshole and complained the entire time.  I then remembered him as the asshole “chef” who was at the rice cake (ddeok) cooking class six months ago who complained that he had to be in the rice cake cooking competition with other peon foreigners and not true chefs.

We booked it to Anguk Station.  EJ was waiting near the exit talking on her phone, which was why she hadn’t answered my phone calls.  She decided to join us for lunch.  Dad and Anita had just arrived at Jonggak.  They were on the south side of the neighborhood, and we were on the north side.  Unfortunately, it had started to rain a little.

We ran to the temple restaurant.  I had eaten there a couple of weeks ago, and it was pretty empty.  When we went there, they were packed and said that people needed to reserve three days in advance.

Well, they got popular fast.

We went downstairs for some coffee and tea.  I walked around outside looking for another place to eat.  We had already decided to take the 3:30 tour of the palace rather than the 1:30 tour.  But we still needed to get some food before Ben’s thing at 2:00.

I found a great smelling little diner packed with salarymen, always a good sign.  We walked down there and found that there was a line.  EJ asked a lady about the place and found that my instincts were correct.  The place had a good reputation, and the woman had been standing there for fifteen minutes waiting for a table.

We didn’t have time for that.  EJ thought of a place right next to us at the Ssamzie building in Insa-dong, Gogung Bibimbap.  I’m starting to find that there are some good restaurants in Insa-dong.  You just have to look.  This place was mostly good.  EJ didn’t like her octopus bibimbap.  She found a stone in it.  But I liked my yuk hui (steak tartare) bibimbap, and Ben had a really good Jeonju-style bibimbap. 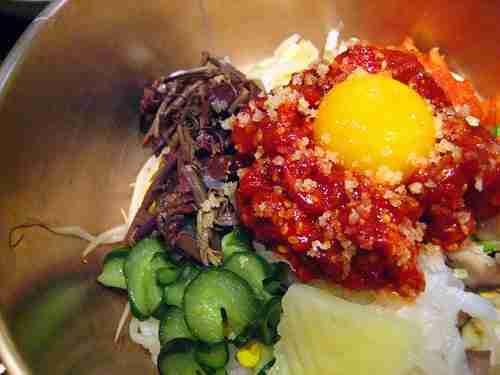 Ben and I had to rush out, but we did have time to take a quick snapshot of the infamous poo bread. 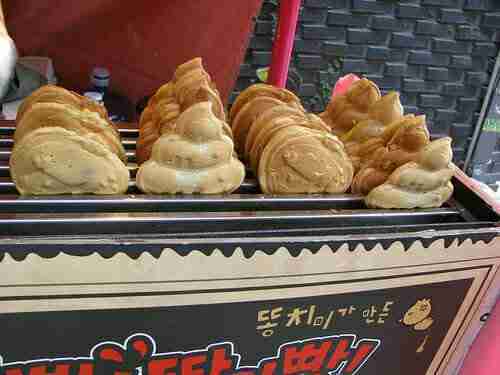 We took a taxi to Gyeongbokgung Station and headed north.  We got to the Food and Culture Korea Co. just in time.  Our friend Veronica Kang set this up.  I had met both Veronica and the lady we were seeing, Kim Soo-jin, that day at an art event in Anyang a year ago.  She’s known as a great food stylist and expert on traditional food.  It looked like there was a miscommunication going on, though.  Mrs. Kim knew we were coming but didn’t know much beyond that, and her staff were caught by surprise.  They hadn’t even eaten lunch yet.  They apologized for not being able to spend much time with us.  They had an appointment with the Korean first lady at the presidential mansion at 3.

As we walked out, Ben suggested that he go to Star Chef and hang out in the kitchen with Chef Kim for a bit.  I got EJ to ask him, and he was okay with it.  I told Ben how to get to Star Chef, and he was off.  I met Dad and Anita at Changdeokgung right at 3:25.

I hadn’t seen the palace or any palace in years.  It was nice walking through again.  Now that I’ve seen more Korean period dramas and have re-read my Korean history textbook, I was able to visualize the history there better.  But I didn’t have much luxury to do so.  I was trying to make sure Ben got to Star Chef okay and was working out evening plans with EJ, Brian and Mom.  Brian and Mom were having tummy troubles.  The foreign food was starting to get to them.  EJ’s tonsils were getting sore.  They weren’t sure what they were going to do.  In the end, I suggested that they all stay home and recover.

We finished the palace tour and still had some time to kill.  We walked to Insa-dong and sat in a nice traditional hanok house at my beloved Insa-dong Tea House.  I had some pine needle tea, Anita had plum tea, and Dad had green tea as we munched on snacks of kwaja (honey cookies) and chewy rice cakes grilled over rocks dipped in honey.  I love those.  They remind me of popcorn cooked in Grandaddy’s fireplace.

We took the train to southeast Seoul to Star Chef.  My all-day runaround through Jongno was done.  The rain really was coming down by the time we got there.  Seoul was having one of its three thunderstorms that year.  It was a chilly rain.  I was glad that EJ was home and not out in it.  We walked briskly to Star Chef. 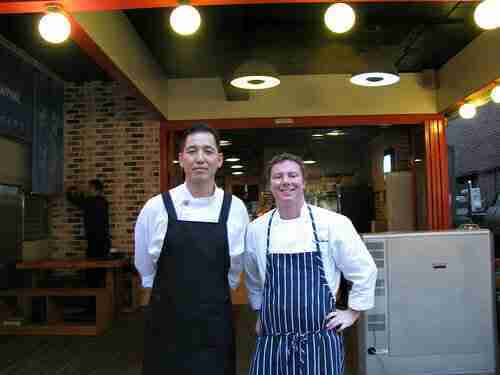 Ben and Young were there drinking beers on the porch when we arrived.  He told me the Korea Times called him for an interview.

It was just the five of us for dinner that evening.  We started out with the chef’s special, a new steak salad that was similar to his BulGalbi Salad.  He’s been tweaking his recipes a bit but not badly.  He’s added arugula to the salads.

We finished the meal with the sweet and sour beef.  They really liked it.  As I describe it, “Stays crispy in milk.”

Chef Kim sat down with us for a while.  The rain had driven away the crowds.  He was so happy to have Ben there.  He whipped us up a dessert of his new Apple Snowmen. 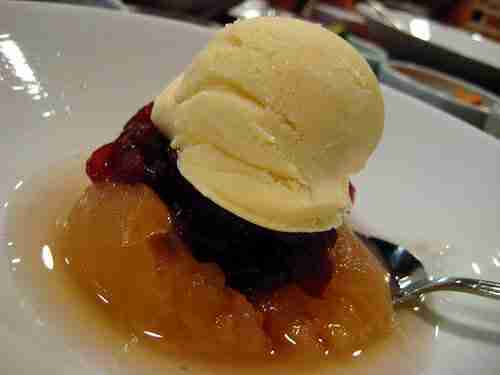 He, Young and Ben got together to talk about the next day.  Ben was going to work in his kitchen, and he wanted Ben to put some specials on the menu as the guest chef.  We discussed a bit on what ingredients were available.

The rain still hadn’t let up.  Thunder was booming.  There was no way I could ask people to wait for a bus.  Chef Kim said I could get a taxi.  I said it would be rough to get one in this weather.  He disagreed and actually ran out into the rain to wave one down.  He returned empty handed but then talked to his valet (yes, Chef Kim has a valet now).  The valet agreed to drive us back to Anyang.