We have to get up early tomorrow morning.  I’m tired.  The only reason I’m typing right now is to kill time as I wear my Eun-Jeong-mandated beauty face mask.

Friday, the plan was to get lunch, rent the hanbok (traditional clothes) and take a quick trip into Seoul.

Didn’t really work out that way.

I was slow moving from a mild hangover, and it was slow moving getting everyone out.  But Eun Jeong found a way for us to get a bus to the E-Mart near our house.  We decided that we had such a vegan-friendly meal the previous evening, we needed to atone for our sins by eating copious piles of meat.  We took them to Uri Boriso Ma-eul (Our Barley-fed Cow Village), which was one of the places we said would be great if any family members visited us.  It used to be my favorite butcher/grocer.  Then they renovated this past winter so that they got rid of the veggie section, reduced the butcher section and made the rest into a nice wooden restaurant.  It’s now a combination butcher-restaurant, which I think is a small growing trend in Korea.

We sat at a table next to the window.  We ordered some Han-oo beef and pork belly.  I also made sure to order yuk hui ??, Korean steak tartare. 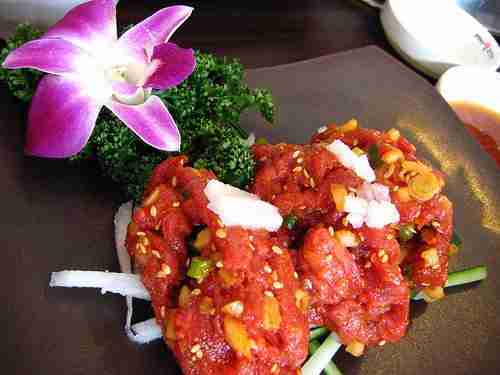 That one was a hit.

Soon after we ordered, I wandered to the meat case, and others followed.  Ben noted the great marbling of Han-oo beef, and they let him take pictures of the butcher slicing it for our meal.  The meal itself was overly decadent.  We answered the question on whether it’s possible to have too much meat. 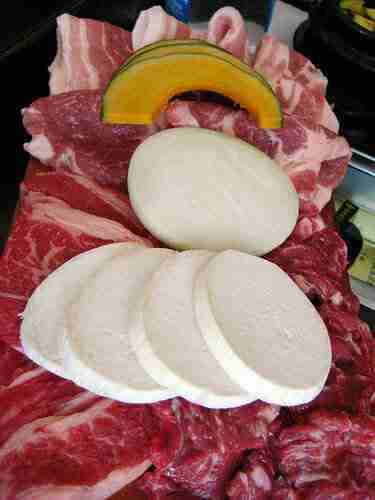 We had two trays loaded with juicy dead mammal.  EJ took over our side of the table in cooking the meat.  The pork and beef were each phenomenal.  There were two sauces and some salt provided.  The beef just needed a dab of salt, and it was perfect.  I savored each slice, sucking the fat out.  The sweet pork’s fat exploded in the mouth.  Mom and EJ were having fun comparing animal sounds in Korean and English.

The meat pacified the group.  Some didn’t even eat dinner that day from protein overload.

We took taxis to the hanbok shop near Beomgye.  This took a long time, and I couldn’t escape because my presence was needed.  We spent a good while looking for Mom’s hanbok.  They had a much better selection than the place where EJ and I rented ours in Apgujeong, but the one in Apgujeong really didn’t specialize in rentals. 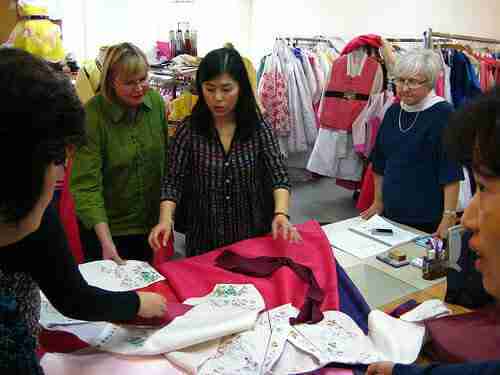 If you know Mom, you’ll have to ask her yourself to tell the story of what went on behind the scenes.  Pretty funny. 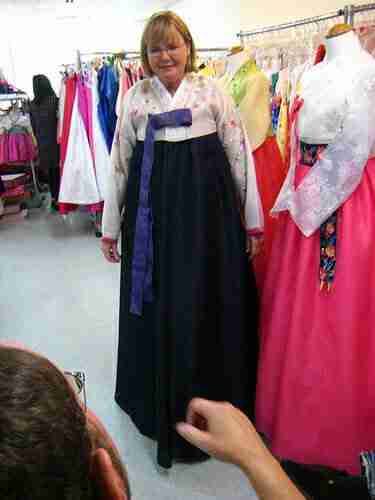 After finding some good matching colors and trying it on, the ladies and EJ taught her the proper posture for wearing hanboks (hint: it involves not sticking the chest out).

Next was Anita, which was faster because she’s a clothes person and knows what works well on her. 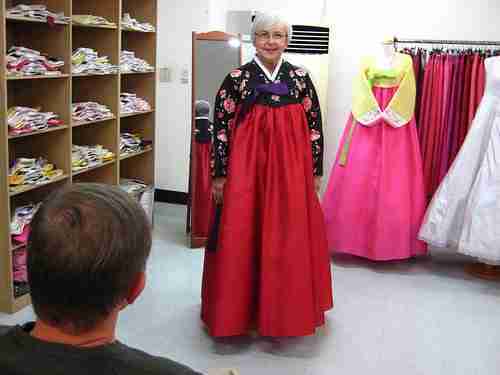 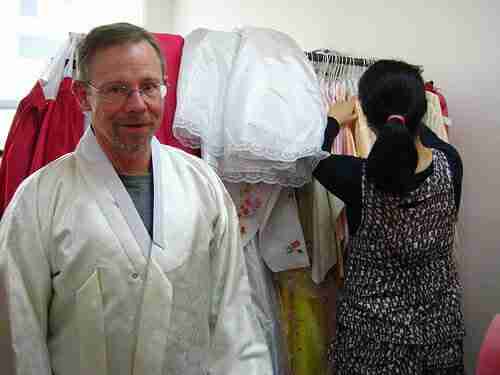 It was easier to find clothes for him because he’s a common size in Korea.  He looked cool.  Check him out.

He felt so authentic in his clothes that he started doing kung fu moves. 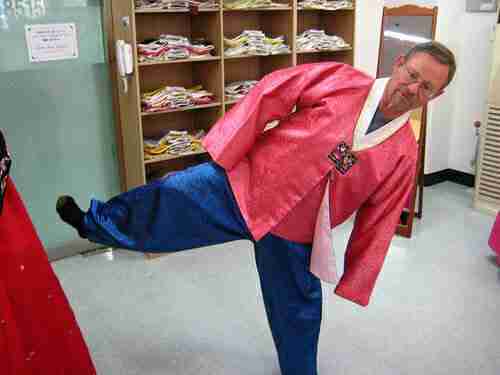 Brian was the last to be fitted, and we barely got something on him.  The pants are supposed to fold around the crotch.  That didn’t cooperate on him and gave him a rather poofy bulge.  But put all together, and he looked sharp. 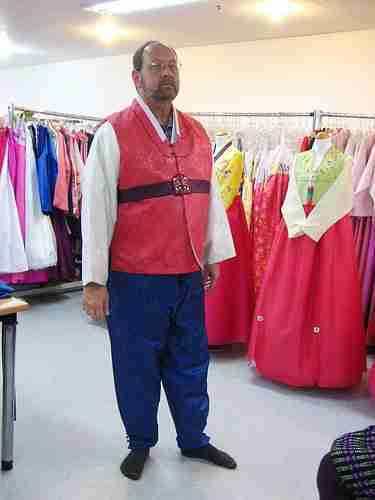 In the meantime, EJ realized that the colors on Mom’s hanbok were too subtle for the mother of the groom.  So they went back and put together something that was using the colors Mom originally was attracted to. 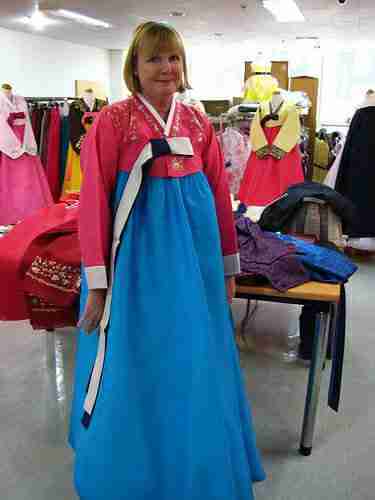 I’m not a good fashion photographer.  That’s Michael Hurt (who, in fact, is our wedding photographer).

People were getting pretty pooped by then, and it was getting late.  The Seoul plans were scrapped.  When everyone was ready, we hailed a cab to go back to the hotel.  I asked EJ what she was doing.  She said she was going to Seoul to pick up cell phone rentals for the family.  I didn’t want her to go alone, so I hastily decided to go with her.  Ben heard our plans and went too.  It was a blur.

We had to rush up there before the cell phone place closed, which was six o’clock.  We barely made it in time via subway and taxi.  We got three phones, 3,000 won a day plus 100 won every 10 seconds.  Pricey, but they’re meant for coordination and emergencies.  They’ve already proven useful. 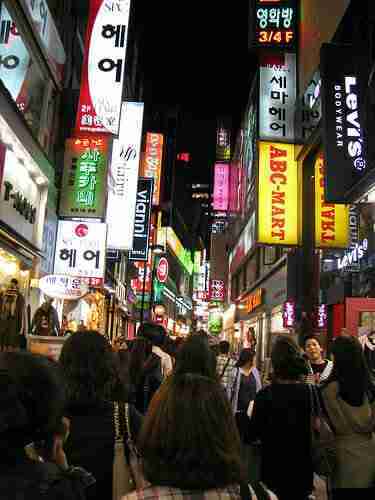 We were right next to Myeong-dong, and EJ can’t resist that shopping ‘hood.  We dove into the neverending Myeong-dong crowds.

We watched the entertaining routine they do on the streets here and in Insa-dong where they turn hard blocks of honey into white spun candy.  Ben bought a box.  I got some maps at the tourist booth next to it.  EJ was there to look at bags and shoes–her favorite past time.  This time, I didn’t mind it so much.  Ben and I just hung around outside.  There were gorgeous ladies out and about.  Myeong-dong attracts them.  Ben wondered where all the men were.  He wanted to find a quirky shop for souvenirs, and I remembered a shop called Kinney, where I bought one of my murses.  We found it, and Ben found a few quirky food-related items.  We then took the subway back.  EJ was falling asleep on the subway.

Ben and I spent some time in his room.  I programmed our numbers into them.  I really wanted to hang out in Beomgye.  Ben was up for it.  It turned out that Brian and Dad were too.  The women were pooped.  So we put together an impromptu bachelor party.

We got into a cab and went to Beomgye.  The street was lit up, and people were partying.  The usual Beomgye atmosphere that attracted me to Anyang years ago.  I asked what everyone was in the mood for and went down the list.  Pierogies and beer sounded like a good idea to them, so we went to Happidus.

Chris, the owner, was happy to see us and congratulated me on my upcoming nuptials.  Ben was happy to be in a bar with hard liquor.  He got himself a Jäger and vodka cranberry.  The rest of us had pitchers of beer.  We ordered pierogies, nachos and chili with garlic bread.  They came out with pierogies, chili with garlic bread and chicken wings.  The new guy there who took our order got his right and left confused when we pointed to the pictures on the menu.  Chris quickly made up for it and said the chicken was a wedding gift.  I love Happidus, but I think I have rarely had an order go through or charged correctly.  Everyone loved the pierogies–dumplings stuffed with mashed potatoes (made in house) sauteed in butter with onions and topped with bacon, cheese and sour cream.

We totally filled up, and I think the beers hit us harder than expected.  Our original plan to move downstairs for barbecued chicken got scrapped.  When we went out onto the street, Ben wanted to walk back the way we came rather than getting taxis close by.  Referring to his comment in Myeong-dong, he said, “So this is where all the men went.”

After a certain hour, Beomgye is where all the salarymen go to drink and eat chicken.  They also play games of strength and skill, such as the Kick-the-soccer-ball-as-hard-as-you-can game and the See-how-many-plastic-Taekwondo-blocks-you-can-break-with-your-fist game.  I gave them a self-sufficiency test at the taxi line and told them to tell the taxi where to go themselves.  It worked.