Vacation has been over for a week.

It started the Saturday before last. I got a call from Dohee that the EBS new season will be shooting in two weeks, a month earlier than I thought. The good news is that it looks like I’m only doing Spy Zone, and the scripts and format have been set up to take less time to shoot. They’re also much better — they actually have plots. I start shooting again on the 18th.

That day, I also met Brant and Yeong Joon in Seoul. Yeong Joon had had something like a stroke a few months ago. He says it wasn’t a stroke. His face looks like stone. He talks and laughs normally, but he can’t show facial expressions. Nonetheless, according to Brant and Yeong Joon himself, he’s recovering quickly and may be back to normal in a couple of months.

I used that time to do some research for my next article in SEOUL Magazine, which is about street food. My premise was that certain unique street foods could be found in certain neighborhoods. Eun Jeong and I had done the research earlier on Korean web sites, and it looked like I was on to something. We scoped the neighborhoods of Gangnam and Apgujeong.

I caught a taxi with them to Sinchon. Brant had to pick up his wife from work, and Yeong Joon had to meet someone. When I met back up with Brant and Terra (wow, she’s really pregnant), we had some tacos. I then tried to check out an interesting coffee house. In there, you put your feet into little pools, and tiny fish eat the dead skin off your feet. It was too full when we went, though.

I later said goodbye to Brant and Terra and went exploring more around Sinchon and Ewha Women’s University. Again, there was no interesting street food. It was a bust, so I went back home.

Sunday was the last big hurrah at the end of vacation. A get together of bloggers and Flickr club members was planned at The Wolfhound. I also planned to meet Joseph, who had been asking me for advice on how to get his money from his former employer. He ended up actually winning and getting most of his money, so he was going to treat me to dinner and drinks before he left Korea. 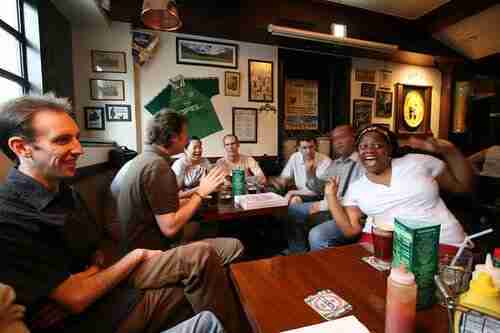 I met everyone there, including Regina. The Flickr people were a lot of fun.

They have some stunning equipment. I have my little point-and-shoot. One of them took a good picture of me.

Kurt later showed up with Tritano and a man named Henney. They are cast members for the TV show “Surprise,” which is highly popular in Korea. The show shoots different stories and urban legends. Then the panel has to decide if the story is fact or fiction. They get paid a lot more per episode than I do from my little EBS show.

Regina and I were invited to come along with them to a “Surprise” cast party at one of the French restaurants in Itaewon’s Restaurant Alley. Right away the producer came and introduced himself. Then a guy with a camera asked to take my picture for casting purposes, and we exchanged contact information. I sat at a table with the guys, and we had Bombay Sapphire tonics, nice wine, chocolate mousse, and crabcakes — all paid for by the show.

The week coming back to work was hard on all of us. Vacation has just felt way too short. Yet we have some good news. We have hired a new teacher, who starts in September. And he’s not just anyone. He’s Dave, or “Hat Dave” (he always wears interesting hats). I knew him when I worked in Ansan in my first year. He worked at the Wonderland across the street from us. He’s also the former host of Open Mic Night in Anyang. Chris W., who also works at our school, took over form him and revived it this week at a new location after a year’s absence.

And that’s what we did Saturday night — rechristening Open Mic Night in Anyang. It’s at Club Psycho, which is across from Anyang Station. It’s a little basement club all painted black. It feels like a bar in a college town. Open Mic was a lot of fun. It’s an intimate atmosphere, so much so that you can stand right next to the performers. The owner (I think, who is very young and lively) was wearing a toga, along with a few other folks. She did regular little events during the night, such as a regular raffle and getting out a bottle of tequila, announcing, “Right now. Tequila shots 1,000 won!”

The Anyang denizens were there. I went there with Chris P. and Sean. Chris’ brother Ian was there, along with Friend Lee and a few other familiar faces. The microphone itself was potted a bit low, I guess to avoid feedback. One of the performers, the teacher of Chris P.’s daughter, played one of my favorite songs from Lost in Translation, “Just Like Honey” by Jesus and Mary Chain.

Eun Jeong has been busy training for a new job. She’ll be making more money. The method at this school is more intense, and she’s stressed.

Oh yeah, and it’s been raining almost non-stop for almost a week.