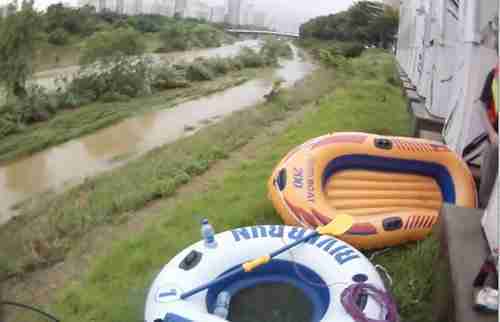 It all started during the rainy season in my first year in Anyang.  I was going to take my usual over-the-river shortcut while walking to Beomgye when I found that the entire footpath was submerged under rushing water.  The Haguicheon (Hagui River) cuts from east to west around the southern base of Gwanak Mountain and meets the Anyang River, which eventually flows into the Han River and out to the Yellow Sea while taking a dip into North Korea.

I used to do a lot of rafting in my teens and early twenties and even took an innertube down some rapids in the Appalachian Mountains.  It’s my favorite outdoor sport by far.  I’m a water baby.  So naturally, I fantasized about taking an innertube and going down the Haguicheon to see where it went.

Each year passed, and I postponed it to the next year.  A couple of months ago, I mentioned my fantasy in passing to Chris P.  He latched on to the idea.  He strived to make it a serious reality.  The same day I mentioned it, he put together a composite map taken from screenshots of the route on Google Earth so we could map out any potential obstacles.  He planned details I didn’t even think about.  He even fashioned a waterproof helmet camera from this fascinating HD mini-cam he got from the internet.

A few weeks ago, he sent me a phone pic.  E-Mart had started stocking sturdy rafts.  He had already bought himself a River Runner.  I had been busy with other things and didn’t get around to buying mine.  He also gave regular updates on the status of the river as he biked alongside it on his way to work.

I was getting a bit nervous.  It was cool when it was a fantastic idea.  But it was getting scary as it became closer to reality.  I’m not 19 years-old anymore.  My body doesn’t work the way it used to, and I have had more experience in getting to understand my own mortality.

Chris regularly ran down the details of the trip with me, trying to anticipate any kinks.  The plan was to go down the Anyang River to Guin Station before going too far towards the Han River and oblivion.  I was concerned by a little line in the Google Earth map and wondered if it was a drop off or some type of dangerous obstacle.  I also had a little fear in the back of my head of getting to a flooded out bridge and getting stuck under it.

As the rains started, the plan started moving back towards the Haguicheon.  It had some exciting rapids.  I figured that we would do it next Sunday, so I made sure my schedule was free for that.  Then Chris called me up as I was getting my coffee.

I was hoping to just hang inside, avoiding the rain, writing and sipping on drinks.  But it looked like this was the opportunity, and it’s hard to talk Chris out of something like this.  He had already been down to the river, and he said it was high enough where the rocks wouldn’t bust up the rafts.

I met him at E-Mart.  I bought myself a raft with paddles, along with some douple zipper Ziplock bags, a life vest, some nylon rope and duct tape.

We stuck with the idea of starting on the Haguicheon, but we decided to start further downstream than the original point.  The river was swollen and flowing nicely.  It was like being back at the Ocoee.  We put down our stuff while this old guy stared at us silently.  Chris pumped up his raft.  I pumped up mine.  We were feeling nervous about the guy staring at us.  I told Chris that if they’re going to cause trouble and get the police involved, we should just give up.  His solution was to get in the water before anyone showed.

Before we did, we put our money and IDs in zipper bags, pushed the air out, duct taped the openings, folded them and duct taped them to the insides of our life vests.  We had Chris’s change of clothes in his backpack, which we just put in my boat because I had more room, along with our water and sandwiches. 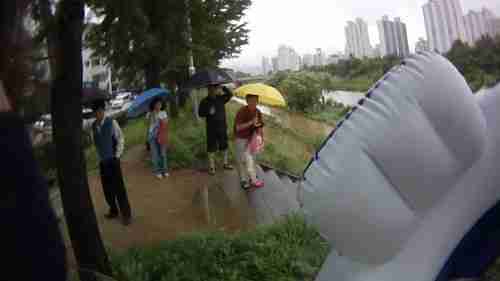 I couldn’t believe we were doing this.  By the time we launched, crowds had formed on both sides of the river, wondering what these crazy foreigners were doing.  I was wondering the same thing.  I put my mind in the zone of being back on a river back home.  Just get in there and get going.

We walked down to the water.  It wasn’t as cold as I expected.  Chris sat in his tube with his camera strapped to his head.  I followed.  When I got into my raft I immediately wished I had put more air in it.

And we were off.

It actually was happening.  The little notion I had for years was reality.  And it was fun!

Chris and I both laughed at the fact that we had actually pulled it off.  After a little choppy water, the pace of the river was smooth.  I got back into the swing of using a paddle again.  When we started, I was way in front of Chris because he got sucked back to the side.  I managed to slow down enough for him to catch up with me.  He tossed a rope so we could keep the crafts latched for safety. 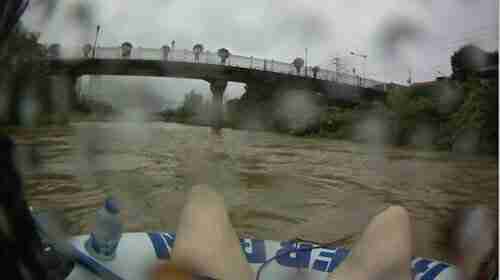 We passed under bridges where crowds had gathered to see such a strange sight.  They waved and said, “Hello!”

I kept an eye out for any dangerous water ahead.  It looked like it was going to be fine.

Then we started going under a tall bridge with more people looking at us.  I noticed further ahead that the water looked choppy, like it was going over some stones.  Chris noticed it to.  Then we witnessed something disturbing.

People were walking over that water.

They weren’t stones.  It was a bridge.  The water had risen to the top of it, and the choppiness was the water trying to flow either over or under it.  It was obvious that at this point the water was above our heads with it being a bridge and all.  We made the plan to get off and walk over the bridge and get back in.  I let go of Chris’s line, and he started reeling it back in.  My raft shot far ahead of Chris, and I tried to steer it to the side of the river.

The raft remained in the middle of the river.  It bumped against the stone lip of the bridge.  I decided to just get out there.  I put the paddle on the bridge and worked out how to get out of the raft. 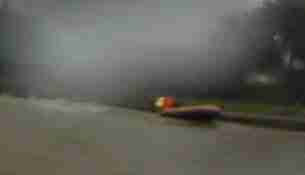 I decided to roll out of it onto the pavement.  Yet my roll didn’t get enough momentum.  I went back into the boat.  When I landed back in the boat, the edge dipped below the waterline, immediately flooding it.  When it did this, the vaccuum of the water flowing underneath the bridge crumpled the entire thing from under me.  The bag and everything that wasn’t tied was lost, and I found myself clinging to the lip of the bridge for dear life. 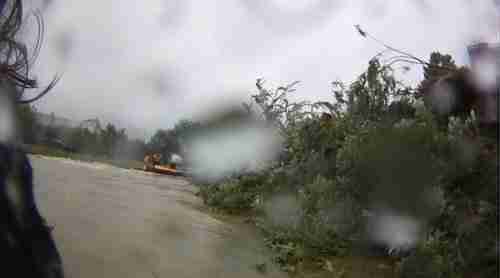 There wasn’t a way for me to swing my hips up and get my feet up.  The tremendous current was pulling my legs under.  I was surprisingly calm, so calm that I was itemizing what all had fallen out of the boat.  This was precisely the situation I feared would happen.  What’s worse was that I remembered this bridge from two years ago, seeing it like this when it was monsoon season.  That’s why my mind had this flashing danger sign when we were planning it.  I thought there was a bridge like this, but I had forgotten where I had seen it.

I thought about just holding my breath and going under.  Very big risk.  I had no idea what it was like underneath, where the supports were.  If I got snagged on one while underwater, it was game over.

The stone started digging into my arms as I resisted the pressure pulling me under.  I gathered my strength and tried to pull myself out of the water.  I imagined that it was like it was in the movies–those tense situations where someone is trying to pull himself up to safety.

Looked much easier on film.

My arms gave out, and I scrambled to get hold of the stone edge again.  My mind rushed to try to come up with a solution.  Some middle aged men saw me and rushed over.

“Yes, that would be great.”

Three of them reached over to get a hold of me.  I wasn’t sure if even they had the strength to pull me out of the undertow.  I pushed even harder, and they pulled.  Like a snap, the suction released me, and I tumbled onto the pavement on my back.  I breathed a bit.  Then it occurred to me.

I saw that Chris had gotten his rope snagged on some trees and couldn’t get himself loose.  I rushed over to help him and to warn him about the bridge.  I started wading into the water when one of the men told me to stop.  Chris got himself released, and he started drifting towards the bridge.  He had missed the whole drama, so he didn’t know why this group of men was eager to pull him out of the water.  He told them he was fine, not to worry.  I explained to Chris that the bridge was going to suck him underneath.  He was out of the water,  and I told him what happened.  Then I gave him a big hug.

"Not going back out there!"

I moved our rafts to the side to show everyone we were not going to go back into the water.  I told Chris I wasn’t going back, and he said that the bridge was a game ender for both of us.  The crowd started dispersing.  Every now and then a few men came up and asked us where we were from.

“Are you English teacher?”

English teachers have enough bad ju-ju as it is.  I didn’t want our stunt to tarnish the image even more.

We deflated our rafts and took stock of what was lost.  The main item was the backpack, and the only really valuable item in there was Chris’s $200 knife.  I looked at my arms.  They were all scraped up.  The adrenaline was rushing.

We walked in the drizzle the long slog back to Chris’s place.  I pulled my left calf during the incident, so it was a bit difficult to walk, but we made it there.

I took a shower and got all the sticks and twigs out.  I think there were even twigs in my butt crack.  I examined my body for scraped and parasites (I was also worried about leeches).  Besides my arms, I had a distinct horizontal mark on my chest that was the exact imprint of the bridge’s lip design.  There were some bruises on my legs, and that was it.  My body started crashing from the adrenaline release, and I flopped into Chris’s computer chair while he showed the raw footage on his computer.

I laughed then, but it was freaking scary.  The entire boat trip from start to getting pulled out of the water took less than fifteen minutes.  I had a beer to calm my nerves, and then we went out for chicken.  It was dark by the time I got home.  Muscles are stiff.

I have the raw footage with me, and I hope to edit it and get it up here for you to laugh at.