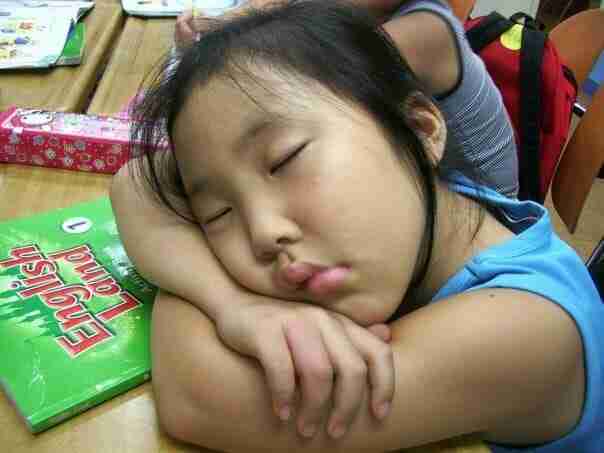 This sums up my teaching skills. She’s sitting in the front row, too. Twice she’s fallen asleep in class.

We’ve just hit what I call the pop. In less than a day the weather turned from unbearably hot to breezy and cool. I’ve noticed that it tends to do this right at the turn of the month. This time it happened on August 30th. Two days off. It’s easy to laugh at Korean tourism promotion telling people to come to Korea because it has four seasons, as if no other non-equatorial or arctic nations have four themselves. Yet I do feel more awareness of the seasons here than I have anywhere I’ve lived — be it the Deep South, upstate New York, or Germany.

I’ve continued to exercise by walking up and running down the mountain. I’ve also occasionally joined the guys for morning racquetball at the Anyang Youth Center. It’s still the same case. When I exercise, I gain weight. When I skip a few days, I lose weight.

I’ve been in an uneasily peaceful oasis as of late. The people around me are in highly stressful situations, and for a rarity, I don’t have any crises to deal with myself. Out of respect for them–and it is different people with different crises–I can’t publicize them. Yet the blog would be highly more dramatic if I did. If you only knew what goes on that I don’t bother to write about. It makes my whole criminal libel fiasco sound like another day at work.

This past weekend, though, I had to do tapings for my Spy Zone shows. I was hoping that it would be scheduled at the same time it was last time and take just as long too. I planned to meet some friends Saturday afternoon in Seoul after taping. I got the message Friday afternoon that the taping would not be in the morning but in the afternoon. I contacted my friends and got them to postpone our get together until Sunday.

On Saturday, I convinced Eun Jeong to finally accompany me for one of my tapings. I get bored at times because there aren’t many people who speak English at the studio, and my Korean is not that much into the conversational level. Most of the time I’m just waiting — in make up — for something to start.

My early onset of Alzheimer’s acted up this weekend. We got out at the wrong subway stop in the rain. This did not get Eun Jeong in a good mood. We got a taxi to go to the right place, and we got out of the taxi and hoofed it through construction site puddles the rest of the way when the taxi got too bogged down in a traffic jam.

I went up to the studio in the KBI building and saw a very elaborate show taping. One of the foreigners, a tall guy in costume, looked me over and said, “‘Sup!”

I said, “Hi,” to everyone and put down my umbrella. I was not only there on time, I was a little late. No one I knew was there. I called Dohee. I reconfirmed that we were supposed to be there at 2 PM. She said yes. I told her I was at the studio.

Needless to say, I doubt Eun Jeong will accompany me to another taping again. Saturday was such a dreary day, and we collapsed when we got home over an hour later.

I arrived by myself at 2 PM Sunday. A smattering of people were there, including the Spy Girls. I sat there and waited and waited. The make up girls put on my make up and got me into my tight fitting costume.

The other show was taping, and we were waiting for them to finish. They didn’t run late. I just question why we have to be in the studio four hours before taping. I’ll bring that up next time.

Besides, it’s pointless to get into costume and make up and then go out for Korean food. The make up has to be applied all over again, and I run the risk of getting red pepper stains on my costume. I’m not the neatest of eaters with metal chopsticks.

Since the sets are more elaborate in this version, it took a while to strike one set and put up the other. We didn’t get started until 8. It’s funny because the actual time I’m working in the studio totals to under three hours. Yet I was there until midnight. The subways had closed, and I was fretting about how to get home from Mokdong. In my fretting, I had left behind my good earrings and the bottle of wine Dohee gave me as an apology for Saturday’s miscommunication.

I wiped make up off my face with a wet tissue as I bolted into the subway station, just in case there was 0ne more train.

I ended up getting a taxi and paying 15,000 won to get home. And like every case when I take a Seoul taxi, they always get in the wrong lane and miss the turn–even though I try to warn them.

Nonetheless, with all the headaches, I do like the new show better. It’s much easier to tape, and I get to find a use for all those funny voices I have been creating since I was a kid.

Oh, Eun Jeong and I saw Akeelah and the Bee recently. Loved the film. She was talking about it the next day. She thought the spelling bees were fictional devices in the movie. She was surprised when I told her that we really do have spelling bees — and that I placed fifth in my district when I was ten years old.