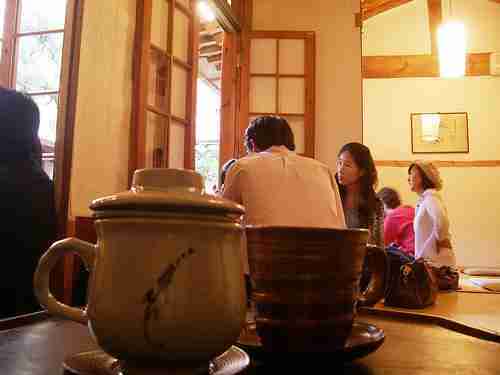 Eun Jeong and I had a pretty good weekend. I had been busy most every weekend since August, and I made sure to dedicate this weekend to her for three dates. Friday night, she met me in downtown Anyang. We walked around a bit, and we ran into Friend Lee. We were in the mood for a cup of coffee, but we ended up at Irish Dream for a beer. While there, we met a new Korean friend who works in advertising and really loved the ZenKimchi shirt I was wearing. He’s also a food freak, and we may go out to eat grilled sparrows next weekend.

Saturday, we went to Insa-dong. Funny how I always go in October–every year since 2004. In fact, the flute guy in my Insa-dong video was still there. A little food festival was going on there, too, and we got to try a good bit of free makkeoli. Every time I go there, I find stuff that I want to send home as gifts. Eun Jeong and I also have the same tastes in home decoration. We like rustic Korean cloth patterns. Someday, we’ll decorate the place how we want.

Can’t do it now. The won against the dollar is killing us, since I have to send a huge chunk of money overseas each month.

We did find money in our budget to have some tea in a traditional tea house made out of a hanok-style home. I had my beloved pine needle tea, which I tried for the first time last year. A christmas tree in a cup. Eun Jeong tried the bamboo leaf tea. 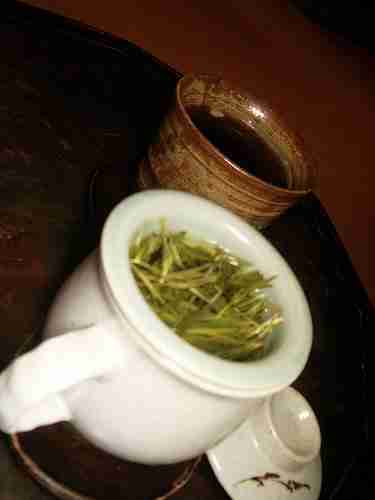 It was not that good. She described it as grass clippings. To me, it tasted like the water after you boil fresh asparagus. She started to enjoy it more with our snacks, some nice cookies and toasted ddeok logs with honey. 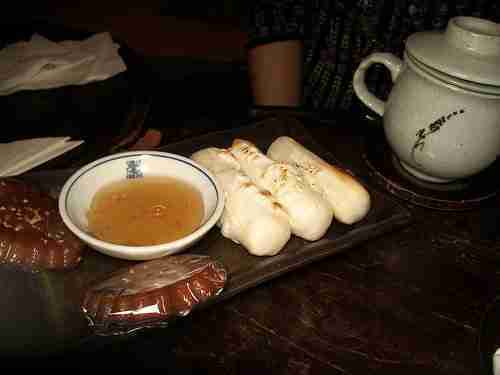 We wandered some more, trying to find a restaurant that was good but didn’t break the bank. A hard task in Insa-dong. We sat down at one place but left when we saw the prices on the menu. We ended up at one place parallel to the main drag in Insa-dong that served grilled fish. It also served grilled ribs on the bone and other goodies, but we were both in the mood for the fish. We also got a bowl of a really good kimchi jjigae. The kimchi at this place was fantastic, and we ended our date on a high note. We made time speed up on the subway ride home by playing a silly little game on my cell phone.

Today, it was difficult getting Eun Jeong out of the house. Outside was gray, hazy and gloomy. She felt horrible. But I had told my new artist friend, Elaine (I know, evil name), that we’d visit her studio. Elaine is an artist from New York who has been in Korea for a couple of months with a few other international artists for an artist residency program, sponsored by Seoksu, a section of north Anyang. Her project has to do with food, and it’s extensive.

We finally got out of the house late in the afternoon. I called Elaine to ask how to get there, and she said she was videotaping a project at 5. Eun Jeong and I found the studios, and one of the artists, Chuck (from Florida), walked us down to a dried riverbed, where one of the artists had made traditional paper blocks in the ground. They videotaped an older lady describing the process, standing next to these square-shaped holes filled with what looked like wet concrete. The artist and some older men cut the gray stuff into squares and pried each piece out with a shovel to dry. This took a while and Eun Jeong was confused.

“I thought we were supposed to be watching some program or looking at art.”

We were in what must be one of the spookiest parts of Anyang, next to a dried riverbed with overpasses and train tracks above us. It also helped that it was foggy, and the sun was setting. 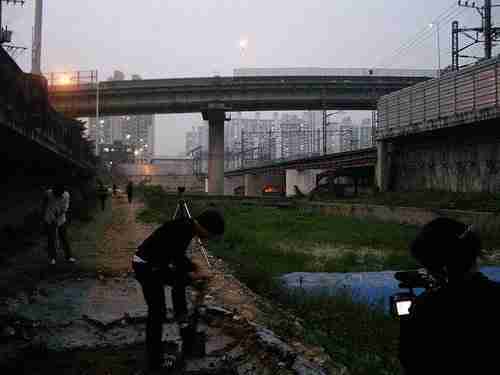 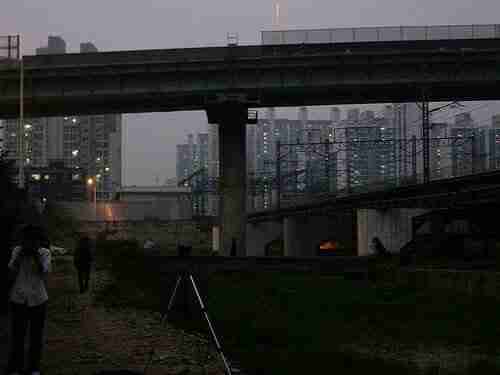 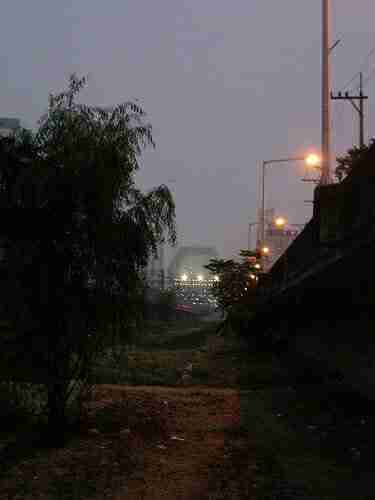 When the paper thing finished, we met up with Elaine and walked back to the studio in a dingy but very old school neighborhood. I believe this area is how Anyang used to look ten years ago before the massive gentrification that has taken it over now. I kinda liked it. People complain how all the Sohos of the world become all cleaned up and lose their edge. Yet these same people never venture into these real neighborhoods that still their edge.

So now we’ve connected with a new demographic in Korea–the artist demographic. We had dinner at a samgyeopsal place, which Eun Jeong and I agree was one of the best pork places we’ve ever been to. They butcher their own meat, and they have a special coarse salt mixture you sprinkle on the meat while it’s cooking. I shared a bottle of soju and a bottle of beer with the director of the Seoksu Art Project. 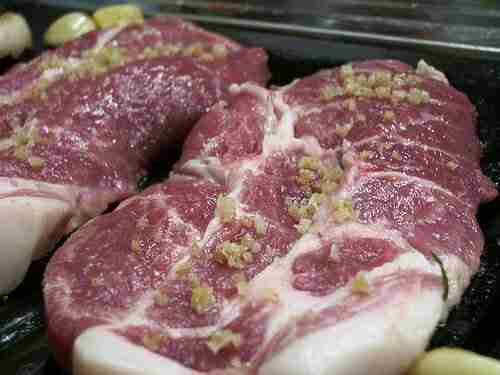 After dinner, we had some hot beverages at the cafe that the director owns across from the studios. It’s one of those great little coffee shops that people say Starbucks is putting out of business. I want to make it one of my regular hangouts from now on. They roast their own beans, and the owner introduced me to Dutch coffee, where he drips the water through coffee grounds for ten hours using an I.V. 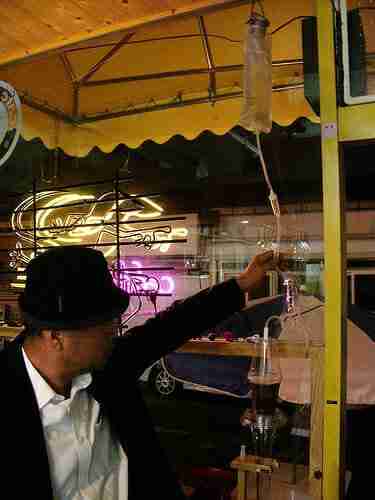 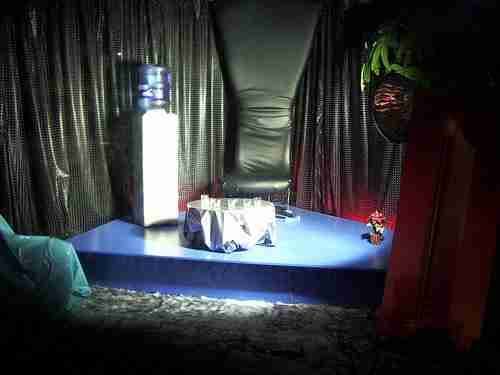 The concept of this one was that they turned a storefront window (the studios are a revamped storefront) into a TV show. The window is the TV screen. They have a talk show set with a ridiculously high-backed chair, a table with soju glasses sitting on it, a faux fur shag rug and a water cooler filled with soju. 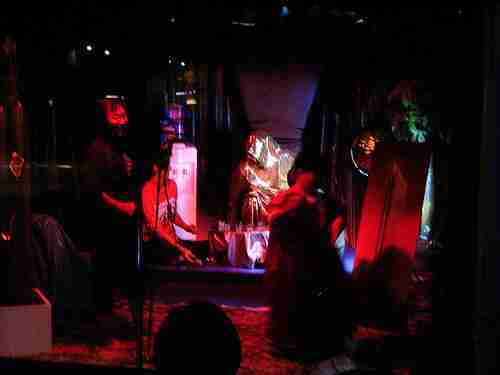 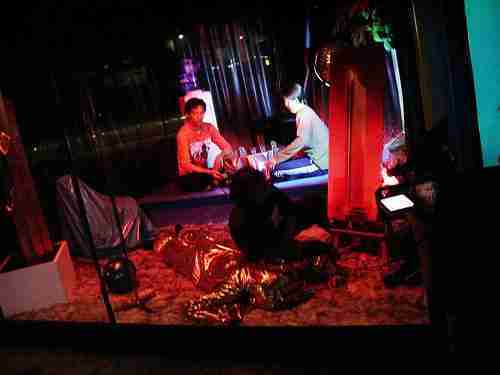 Two guys in the back are drinking glasses of soju, while the main performer comes out dressed in a shiny gold hooded robe that obscures his face. A masseuse comes out and massages him for twenty minutes while he holds the microphone to his face and grunts. Lively game show music plays as a pre-recorded audience laughs and cheers. Every now and then this boy, who everyone calls “Mr. Kim,” walks in and plays with a balloon. 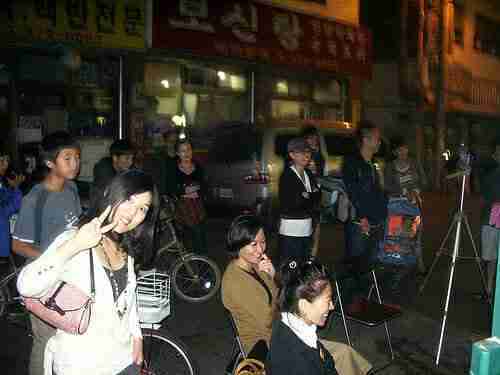 The real show wasn’t what was happening on stage. It was watching the faces of passersby as they accumulated outside the window to figure out what the freak was going on. I was laughing at the absurdity of it all and truly enjoyed myself. I’m not sure if it was the intention, but the absurdity of the show almost mirrored your average Korean talk show. I mean, come on! During dinner, I glanced at the TV, and they had a show of celebrities playing Jenga.

How dull is that??

But add goofy music, sound effects and audience noises, and you are not far removed from a guy giving a massage to a man in a golden robe.

Anyway, Eun Jeong had a good time, too. It was a new experience for her, and I think she got another taste of Korea through my eyes.