EJ went to the doctor today. She’s getting close. Not dilating yet, but the walls are softening. They’re predicting Jian will be born slightly before her due date next week. I’m excited but also biting my nails. Trying to keep my schedule clear for the next week, but people keep wanting pieces of me.

The tough call was a TV show that’s followed me around for a couple of days and has entered me in a cooking contest. I normally would have declined, but the prize is W10,000,000. That really could be put to good use, and what if I declined and the baby didn’t come on any of those days.

But what if she does?

It’s been a TV-heavy month. My “Heart to Heart” interview came out on Arirang this week. The docu that I was just talking about has been going on. But the big one was “Running Man.” 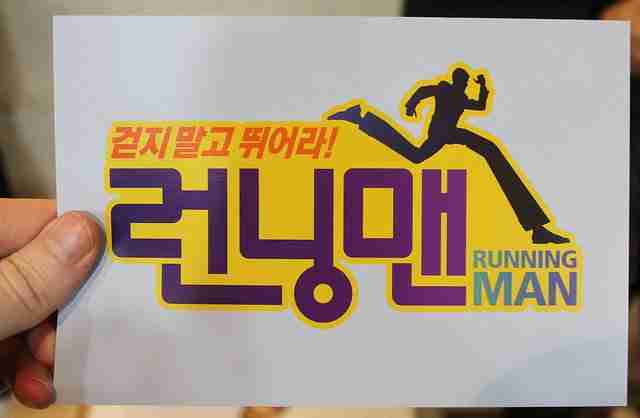 No, it’s not a game show where people are trying to kill me and Arnold Schwarzeneggar. It’s one of those variety shows on Korean TV with celebrities competing for something. It’s hosted by Yu Jae-seok, who is one of the two most popular TV hosts in Korea and is quite funny, even if you don’t understand Korean.

A few of us got an email from Cynthia that they were looking for some foreign food bloggers to be judges on their show. I accepted, as well as Jen “Fatman Seoul” Flinn, Roboseyo, and Simon & Martina from “Eat Your Kimchi.” The premise of this show is that they take over some landmark after closing hours for their contest. This time it was Korea House, which is next to where we got married. And they scheduled it for 11 p.m., telling us that we’d only be there an hour.

But I have experience with this stuff. I expected a lot of schedule changes and to be there much more than an hour. And I was right. Korea House closed later than they thought, and the starting time was moved to 1 a.m. The day of the show, we got the message that it was moved again to 2 a.m.

I spent the day in meetings. I was being interviewed that afternoon, and the interviewer invited me to Hongdae for a Latin dancing lesson. I figured that was a unique time waster while I waited for 2 a.m. to roll around. And it was a good bit of fun. The moves reminded me of rehearsing for West Side Story, and I started to get the hang of them. But the free dancing afterward put me up against the wall. These people knew what they were doing, and they were flying around the floor, cooling me down with their wind generation. One British lady asked if I wanted to practice. After a few minutes of my stumbling, she said she’d put me out of my misery and let me return. Even though I didn’t dance, I had a great time watching everyone else.

It was around 11:30 when I headed out the door and went down to Jen and Rob’s neighborhood. There’s a pub–Public–which has great burgers and Alley Kat beer. Sounded like another good way to kill time. So I went there and enjoyed my burger and beer while finishing up the draft for my first major U.S. magazine piece (yea!). Jen and Rob showed up. Jen was already in a bad mood because of the schedule changes. She had to work the next day. She started talking about backing out. Then 1:15 rolled around, and I pushed us to go ahead and get there.

We took a taxi. When we got there, the security guard wouldn’t let us in. We explained to him that we were part of the show. He asked us who we were in the script. Eventually we got in. Simon and Martina (“SiMartina?”) were already filming for their video blog. I can’t wait to see the final product. They’ve really gotten good over the past two years. I myself was recording on my camera because of my obligations to Samsung.

We were put in a dining room to wait. Jen was really not feeling it and was starting the process of backing out. But then a producer came in with some coffee drinks, and she got her second wind.

We each sat down for interviews about Korean food globalization. While each person was getting interviewed, the rest were behind the cameras trying to make that person laugh. I’m an easy target. I crack up easily.

The beginning part of the show was finished, and they moved the entire crew and cast into the room they usually use for cooking classes. This was by far the largest TV crew I had ever seen. There had to have been at least twenty people with cameras plus other cameras locked down in other places. Tons of lights and lots of people milling around. We went up and watched a good bit. SiMartina recorded some more video. I only recognized one celebrity, but Martina knew a good many of them. One guy was from the boy band 2PM, and other was from a Korean drama that she liked.

We went back downstairs to our waiting room, and then suddenly it was time for us to go on. We went back up, and they mic’ed us. They led us back behind a wall and gave us a quick rundown of what to do. Basically, it was to taste the food and talk about it, but don’t use any superlatives like, “This is the best.”

Our energy was back. We lined up. I was first and was hoping I’d get the cue right to come out. And I did. I won’t go into details about the show itself because it hasn’t aired yet. But we all had a great time. We all were funny. We clicked well with the celebrities and were comfortable. And I had some of the worst food I’ve ever had. 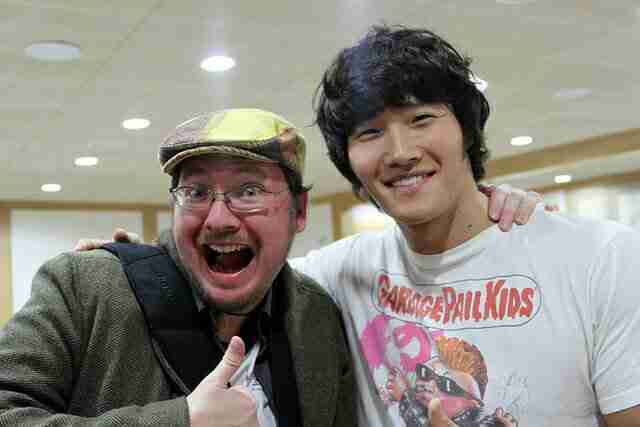 It all wrapped up around 5 a.m. I quickly ran down to get my camera and was able to get a picture with Yu Jae-seok and singer Kim Jong-guk. SiMartina were talking to Nichkhun of 2PM, who is a native English speaker. He was doing something for their video and even gave a message to Martina’s students.

I talked a bit with Kim Jong-guk about his Garbage Pail Kids t-shirt. His publicist gave it to him, so I couldn’t find out where he got it. Then we somehow got onto the topic of Korean women.

I know people say this about celebrities a lot, but these guys were cool. Very nice. Easy to talk to–well, considering the language barrier. But no prima donna airs in there.

The SBS van kindly drove each of us home–to three corners of the Seoul Metropolitan area. I was the last to be dropped off and got in the door at 7:30.

So that was an amazing day. Oh, and to make it even more amazing, Seoul ICE is totally on track–for those of you who know what that means. More details later.

Hopefully the next post will involve a baby picture.