The Latest Member of ZenKimchi 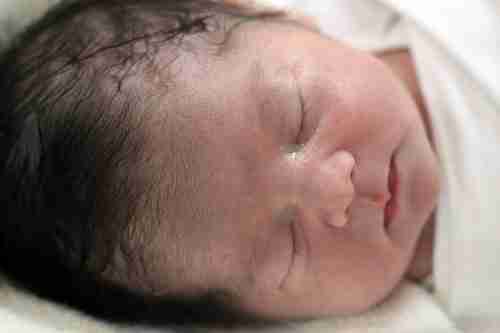 Our little Jian was born Sunday morning. I had just won 2nd place in the cooking competition and called my wife. She asked me to rush home. She needed to go to the hospital. As luck would have it, Saturday night was heavy in traffic, and I had the only taxi driver in Korea who obeyed traffic laws.

After 14 hours of labor, EJ gave birth to Jian Lee-McPherson at 8:51 a.m. She’s my obsession right now. So forgive the light posting in the near future.

It’s strange adjusting to the Korean concept of the hospital guardian. When someone’s in the hospital, they have a person, usually a family member, looking after them. The guardian does jobs that nurses normally do in the U.S.–which makes me wonder what the nurses do do in Korea. So I’m living at the hospital with no internet connection. EJ is getting checked up at the doctor right now, so I’ve escaped to a Tom n Toms coffee shop nearby for some joe and breakfast. I dig their honey bread.

Both of us had no sleep from early Saturday to late Sunday night. Add to that the adrenaline of both the cooking contest and pushing a human being into the world, and you could guess we were pooped.

It’s traditional in Korea to give a new mother MiyeokGuk (Seaweed Soup). EJ is getting this, I think, seven times a day. She’s never gonna want to eat MiyeokGuk again–which is fine by me.

It’s killing me that we’re in the Beomgye section of Anyang right now–where we usually go out for eatin’ and drinkin’–and I can’t go out eatin’ and drinkin’. It was a bit surreal being up all night feeling useless while EJ was in pain Saturday night, with the drunks screaming and singing in the streets until 5 a.m.

I tell you, I may not be the happiest person in the world right now, but I’m sure I’m in the top 5 percentile.