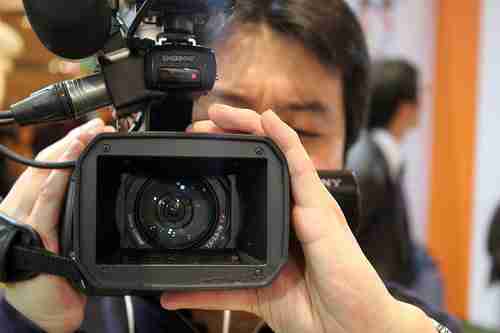 Totally on a cloud these days, even with this creeping headache and no ibuprofen in the house.

I think it started with the Nanoomi party. Had a great time meeting and hanging with all the K-bloggers. Then there was Running Man and meeting celebs on a major TV show. And number one has been the arrival of Jian.

No, she hasn’t arrived yet.

Actually, we’re scheduled to induce labor on Wednesday. I don’t think Jian’s packed her things yet for the big move. But she is coming soon, which is part of my euphoria.

I’ve had a TV crew follow me for a couple of days. Once at the Nanoomi party and then at our house. They shot me making my new addiction–garlic baguette pizzas, which I shared with them. The reason for this is that I was entered into a cooking contest for multicultural families. I was one of only three men in the group of 48.

The theme of the contest is making something global with gochujang. I was originally going to turn down this whole project. Mostly because it occurred on Jian’s due date. But then I started thinking about recipes. Then I thought about all the times I’ve watched Iron Chef, Top Chef, Hell’s Kitchen and all those other cooking contests while playing armchair quarterback. This would be my chance to enter a cooking contest and see if I could do any better.

So, I played with some ideas for recipes. The span of time I had between finding out about this and turning in the name of my recipe was a day or two. I ran the idea of one of my Ko-Mexican dishes, figuring out how the gochujang would work. Then I remembered I had a big bag of Spanish smoked paprika. A smoked gochujang… hmm… I also remembered my brother making a great tasting aioli with roasted red pepper. What if I made an aioli with gochujang and smoked paprika?

I had to test it out.

I made an aioli from scratch in the blender and then mixed it with gochujang and smoked paprika, and I was surprised. It worked!

The next day I figured that I needed something bright and fresh to complement it all and bring it together. What’s in season? Korean pears. So I’d make a fresh pear salsa. I went to the store and got some ingredients. Tracked down some red onions. The deadline to turn in the recipe idea was that afternoon. I chopped and threw it together while EJ was taking a nap. I then walked in the bedroom.

“I can’t believe this actually works!”

Those two experiments I took to the Nanoomi party to try on the crowd with bulgogi burrito bites. And they loved it. I also listened to some ideas for improvements.

For two weeks I’ve been waiting. In the meantime, I’d started negotiations on a web design contract that looks like it will go through and will pay the bills for a few months. And the Seoul ICE project is moving forward nicely. More reasons for the euphoria.

Yesterday, the day before the contest, I practiced making bulgogi from scratch. I usually just buy it premixed at the market. EJ and I worked on the basics, and I think I have a killer recipe–or rather, technique. The trick is to use ground up onions, garlic, and Korean pear. And I like to add ginger, which is not traditional. That’s the base. From there you soy sauce, mirim (or some rice alcohol) and something sweet–sugar, honey, Coke. You need to make it sweeter than your instinct tells you because it lessens when cooked. Marinate the meat for an hour. Halfway through marinating, add some sesame oil. That gives it more depth and aroma.

I woke up early today to make it to the COEX Exhibition Hall D by 10:30. EJ couldn’t come with me because the doctor told he to stay in Anyang. When I got to the entrance, the ticket people had no idea what I was talking about.

I was about to just show them the sign for the cooking contest when I just had the notion to walk in. So I walked through the entrance. The security guard asked if he could help me, and I told him I was in the cooking contest. He let me in. 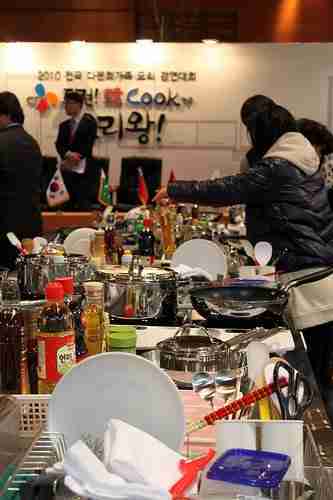 I arrived at the area, and the TV crew recognized me along with an organizer. They gave me a station, and I set to work making sure everything was there. Then I got pulled to put on a chef’s outfit, complete with coffee filter hat. 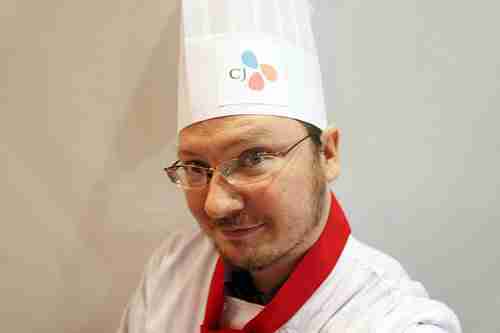 Back to checking against my list. Some things were missing. I asked. They found them.

I saw some people starting to work. I remember EJ telling me that we’d have 30 minutes prep time. I guess it had started. I asked if I could start and was told, “No.”

“Can I peel things?”

I washed and peeled some stuff. I just had to do something. I was getting antsy. Then it was photo op time.

They corralled us behind a table of flags and gave us kitchen utensils for props. Then it was the usual cheesy “Fighting!” poses for the press.

Back to my station. 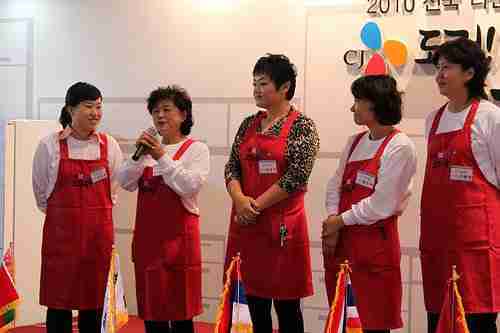 My helper's on the left.

A woman came up and said she would be my helper. She didn’t speak much English, but we got to communicate a bit. In fact, she tried to act as my interpreter when reporters came around for the rest of the day. Turns out she’s a power blogger, too.

Back to prep. I need to hook up my stick blender and…

I looked at the commotion of, I think, every photographer in a mile-wide radius converging in front of some Russian women eating kimchi. I rolled my eyes and said to my helper, “I hate it when they do that. Foreigners eating kimchi. So what? It’s like they’re monkeys at the zoo.”

And then I was being pushed over to do the same thing. This is what sucks. Do I humiliate myself and do the “foreigner eating kimchi” schtick, or do I keep my dignity but come across as an asshole?

I’ve never been much on dignity.

Finally, it was time to start cooking. My helper was very eager, and she helped a lot. She had mad knife skills, and she made my pear salsa look gorgeous. My bulgogi marinade came together well, and she gave me taste recommendations–too salty, too sweet. Like that.

Equipment went missing. A mixing bowl that was there when I first checked my station was gone. I don’t think a contestant took it. I think maybe an overeager organizer took it for the photo ops. But–oh yeah, out of all the ingredients that they could have forgotten, it was the beef for my bulgogi. They quickly went out and bought some. Everything else was there.

It was a good hour of prep before I turned on a burner. It was my first time using an induction stove. I didn’t like that it would vibrate enough for my pan to start wandering off on an adventure. But I liked the safety factor, especially considering my clumsiness and unfamiliar kitchen environment.

I looked across from me and the Uzbek contestant was making these gorgeous beef dumplings that looked like tortellini. I had bonded a bit with one of the other male contestants, a Pakistani guy from Incheon. He made a lamb curry.

I cooked the bulgogi until the liquid reduced to almost nothing–something I had neglected in the past. My helper took a taste and said it was great. I took a taste.

That was pretty darn good. I guess it was the pear.

I then assembled the quesadillas and cooked them. I was having trouble getting my pan hot enough to put a good scorch on them. I wanted to have them crispy so they’d hold up for judging. I made a lot of them–until the bulgogi ran out. The camera guys were getting impatient.

I had a good stack of five quesadillas. This is where I was in new territory. I’d come up with a plating scheme–drew it on some paper. I had different plating ideas. I went back to this one. Yesterday I went and bought specific plates for what I had in mind. And I also practiced my saucing technique–the spoon drag. I’d always seen it on TV, but I couldn’t do it right at home. This is a technique where the chef places a spoon right side up on a plate, slapping it hard, and dragging the sauce across. I could never strike it hard enough. Then I figured that if I just turned the spoon over (DUH!) I could pull off the same effect. Then I went further and made a wavy design like a mountain in a Korean drawing.

I sauced my two plates. The cameras started crowding. They were like, “This mo’ fo’s serious!”

I cut the quesadillas into quarters and laid them down, four to a plate, parallel with the sauce. I then carefully topped each slice with a spoonful of pear salsa. I had some chiffonade sesame leaves standing by, and I curled them and topped the salsa with those. 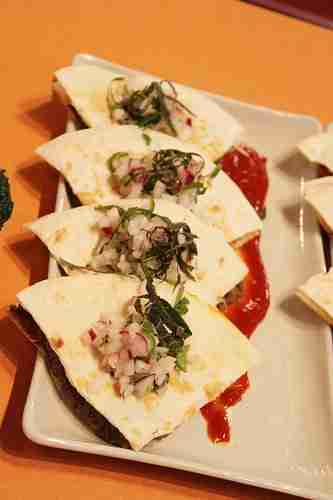 We put them on the display table. I then cut up the rest of the quesadillas, planning to serve them to everyone else, and topped them off with the rest of the sauce and salsa, throwing strings of chiffonade sesame leaves like confetti. I was having fun. 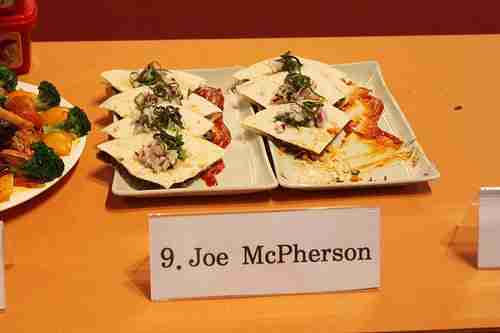 They had me stand across from the judges as they ate my dish. The judges said it was good. I thanked them. Back to the quesadillas.

Everyone devoured them. So I started to clean my station and pack up.

They called us back to the front. Keep in mind that everything’s in Korean, and my Korean still isn’t on that level yet. Studying harder these days, BTW. I remember hearing something about #7. I was #9, so I thought they announced that #7 won because everyone was clapping. But no, they weren’t announcing the winner. They were handing out participation certificates and gift boxes to all the contestants. I accepted mine and bowed. The gift box was heavy. It was full of oils and syrups and other kitchen products that you usually find in Chuseok gift sets.

Then they announced the three winners out of the twelve. I think I heard my number. Then–

All cameras turned in my direction, and I must have looked like I was crowned Miss America. My heart just raced. I couldn’t believe I won!

Then I got pulled for interviews with the documentary crew. Then I was sent back to finish cleaning my station–but–no–they told me to take off my chef’s outfit. So I started taking it off–no, I’m supposed to be cleaning my station.

Eventually, both got done. I only lost one thing, and it was my leftover pouch of smoked paprika.

I walked a bit around the expo and had a nice time. Then I packed my stuff and headed out.

World Vine, the amazing wine shop, was just down the street. I stopped by, and Mr. Ju gave me a very much welcomed glass of wine.