It was packed. Even more, it was the warmest day I’d ever spent in the UK.

I guess it was also the day they decided to start following rules. I went to the exhibitors’ entrance like I had every day, and the guard wouldn’t let me in with my press pass. He told me to wait until the event started.

I went to the other end of the venue–the Taste of Thailand side–and walked up to the gate. An exhibitor was walking ahead of me with a suitcase and listening on headphones. The guard asked him for his ID, and he ignored him. As the guard chased him down, I sauntered in unhindered.

Gizzi showed up in bad shape–sunglasses and pasty skinned. To add to everything, the health inspectors decided to lay down some obscure rules right before service, causing us to kill one of the dishes (Yukhoe) from the menu.

Before our service started, I went to Flesh & Buns to try their two Korean-inspired dishes.

The Korean Fried Guinea Fowl was quite crispy. It was obliterated with sauce. The sauce was fine, but it would have been better if it was just tossed in the sauce rather than drowned in it.

The other dish was a steamed bun with sea bass, coriander miso, and kimchi. It was fine. Messy but fine. The kimchi complimented it well.

We did service. I think I was a little quiet this time. It still went well.

After that, I shot over to finally get my Mahiki Pina Colada in a pineapple. It was good. 10 pounds, but it was good. Or rather, it was good, but it was 10 pounds. Again, I had heard a lot of talk from festival goers and exhibitors about the high prices. It’s already a high price for the ticket, but some of the dishes are also pricey. If I was organizing this I’d encourage the vendors to sell their wares at or around cost. The unashamed money grabs were discouraging people from showing up next year.

With my pina colada, I had a nice Indian chilled octopus braised with chilli, garlic, and smoked paprika from Assado.

Ah… what to drink next? You know, I can’t believe I’d never had a Pimm’s Cup before. The booth was right next to our restaurant, so I got one. And yes, refreshing, slightly bitter and not too sweet.

I also tried me some of the Harold Brompton’s alcoholic iced tea. That was excellent. No artificial flavors. Lemony. And smooth. Could hardly taste the alcohol.

I went to Le Gavroche to try the Pork Cheek & Belly braised with Balvenie Whisky Sauce and Soft Polenta. This turned out to be the same dish that the judges shared with us a few days before. It was fine, but I couldn’t taste the whisky at all.

I was not happy with the BBQ spiced crispy pig ears from Duck & Waffle. I should have tried some free samples. I almost broke a tooth on some. 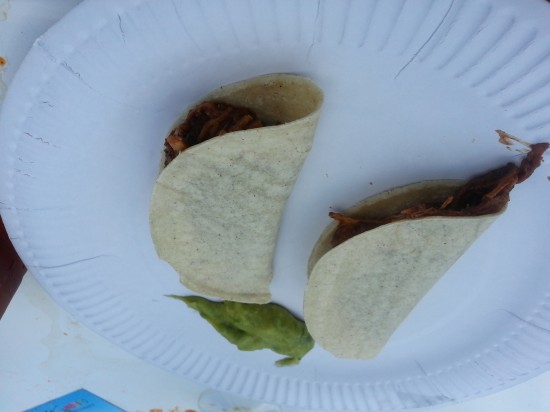 Yet I was quite pleased with the chicken mole street tacos from the Mexican pavilion. They were cheaper as well.

My next disappointment was the Crispy Pig Cheeks with Piccalilli and Mustard Frills. Way too dry for pleasure. Needed some lube.

The surprise hit for that day was the Sticky Toffee Pudding with Vanilla Cream from The Truscott Arms. The pudding itself was hot, gooey, and decadent. I shared it with people at the Korea pavilion, and I noticed them getting their own later.

But the BIG surprise that day came later. I was sitting, waiting for the next service when these two young ladies came up and said, “Joe?”

(The only people not flicking off the camera)

They were two people who had been on my BBQ tour in Seoul last year. They weren’t just that. They were part of one of the most memorable tours I’d ever done. I was so happy that they found me at Taste of London.

Taste of London, Day 4: And So It Begins

Taste of London, Day 5: This is How You Promote Korean Food