Yes, I finally started going around and tasting things. I bought some crowns, the currency for the festival, got a guide with a list of all the restaurants and their dishes, and made a plan.

First, I had to get a beer. Got an IPA from the Chapel Down booth. I must return for the bubbly and oysters later.

Funny thing that Shake Shack made an appearance here. I know its reputation in New York, but I have never tried their burgers. I absolutely had to try one.

And you know, pretty darn good. As an aside, my camera phone was having trouble focusing for a while. It later started working, and I have no idea what happened.

Great name for a meat producer

During the first service, a lovely couple highly suggested the beef tenderloin at Plum + Spilt Milk. It was one of the pricier items, but they were right. The meat was so tender that I could slice right through with a plastic knife. Flavorful pate as well. The asparagus was gently tender as well.

I ventured to the Thai section. I love Thai food, but for some reason I wasn’t all that excited. I did get some shrimp. The crime that put a bad taste in my mouth was a section that promoted Thai fruits with large durians on display, but they didn’t have any to eat.

As I ventured back to the Korea pavilion, I stopped by the Argentina booth for a steak sandwich and beer. By then I was feeling full. When I got back, it was break time for much of the pavilion, and they were passing around steak sandwiches to everyone. I can’t believe I turned one down. But I really was satiated.

I also tried an amazing product–Biscuit Butter. It’s these Belgian cookies pureed into a spread. Bought two. I went back to the pavilion to show Rupert what I got. He pointed to my side and mouthed, “Amabassador’s here.”

The Korean ambassador was there with his entourage, and Dan was showing him around. He introduced me to him, and we had a pleasant chat. He invited me to his house for dinner, but the invitation was for after my departure.

The first session ended, and everyone had an hour break while the festival reset (i.e., clean the toilets). I perused my guide and decided I had enough time to take a whisky master class at the Balvenie lounge, which is a spacious comfortable lounge. Kimberly from Korea Foods wanted to try it as well, so I got us both reservations. 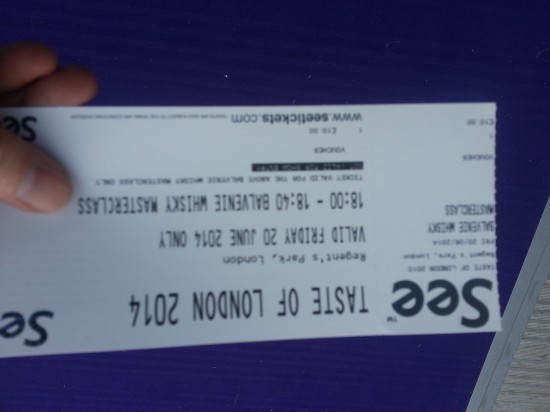 On the way there, I decided I had some time to try this little morsel from Jamie Oliver’s Barbecoa. This was one of the best things I tasted at the festival. Others at my table inquired about my dish and got their own. I finished and entered the Balvenie lounge.

It was a pleasant time learning about this particular whisky and some more facts about whisky itself. We were taught by Miss Whisky herself, Alwynne Gwilt.

I returned in time for the evening service. We started it a bit early this time, so I had some time afterward to try some more vittles on my list.

Bahn mi: Vietnamese baguette, confit duck, foie gras pate, pickles & coconut, chili sauce. (Bar Boulud) It worked well as a banh mi. I couldn’t distinguish the individual flavors. I only could taste the foie gras when some of it got stuck to my thumb and I licked it off.

Duck and dog. (Club Gascon) I guess it was a hot dog with duck. Maybe not. I didn’t see any hot dog. It was fine but not memorable.

Taste of London, Day 4: And So It Begins

Taste of London, Day 5: This is How You Promote Korean Food