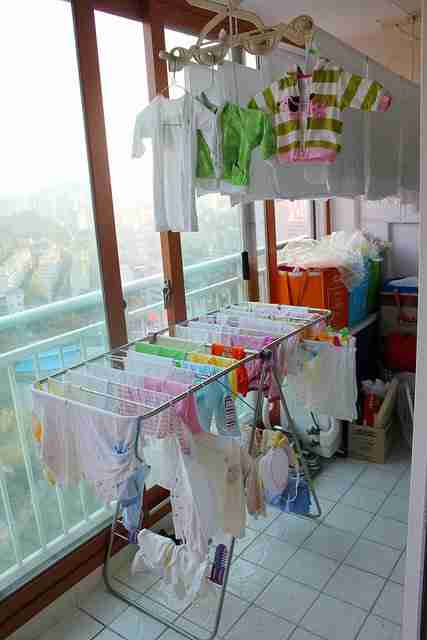 It feels realer all the time.

We’ve been spending the past two days washing all the new baby clothes, blankets and handkerchiefs. It’s hitting us now that our laundry load will greatly increase. But also, actually seeing the little shirts, pants and one-pieces make little baby shapes on our porch give us this illusion that she’s already here.

I have a feeling that she will arrive very soon. The due date is November 20th, but from the beginning I’ve felt that date was a bit off. I think that it’s more early November and that she will be born within the next two weeks. EJ has already dropped. She has more stomach and lung capacity, and she feels like she’s going to pop. She is looking hyuge now!

The baby’s kicks are getting stronger, too. EJ was doubled over in pain last night from a strategic kick to her stomach. This morning she woke up feeling like she had gotten into a fight.

I’m sorry that I haven’t talked much about the rest of my trip. It was more intimate and private. Basically, I went to Decatur to see my grandfather. He’s 92. After a bit of a cancer scare, he’s been moved to the supervised section of his retirement home. It’s actually a decent looking place. I’ve been in retirement homes before, and those were white cold antiseptic places. Grandaddy’s is warm and feels more like a bed and breakfast, though the tenants do complain regularly about the food. I ate a meal with them, and I enjoyed it. But it was mostly foods that I have missed from home, like fresh green beans.

It turns out that I never got over my jetlag. My sisters and brother-in-law Glen picked me up from the Huntsville airport on a gray day. It was actually colder in Alabama than in New York. But it didn’t matter. We were going to watch some college football! That’s something I have sorely missed.  So we got some sandwiches and some beers and hung out in Grandaddy’s apartment watching the Alabama game. And right before Alabama’s big comeback win, I passed out asleep on the floor. Snoring.

I enjoyed being around family, including my nieces. It was the first time for me to see one of my nieces. The fam had also collected a huge amount of swag for little Jian. When my dad arrived from Denver a few days later, I asked him to bring an extra bag for me to put the stuff in for the trip back. 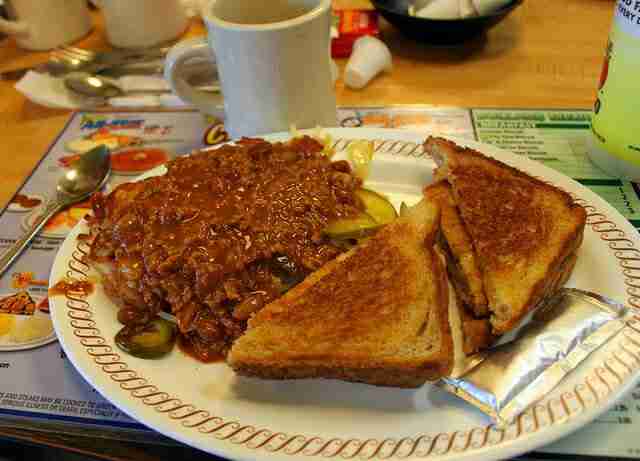 But it was a great few days back. Sparse internet forced me to relax. I stayed in one of the independent housing apartments. The living room alone was bigger than our apartment in Korea. I ate a lot of barbecue, Waffle House and soul food. I even had time for a steak. 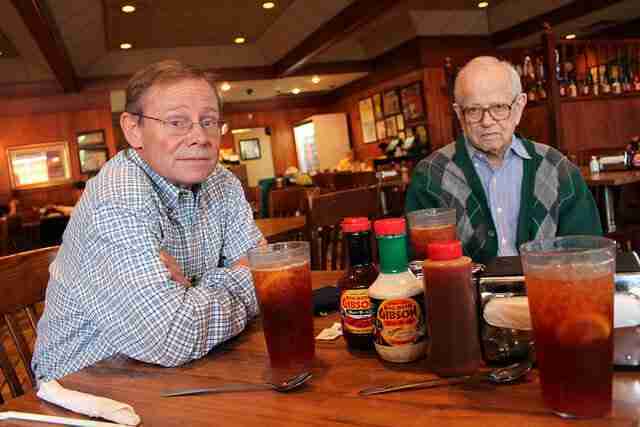 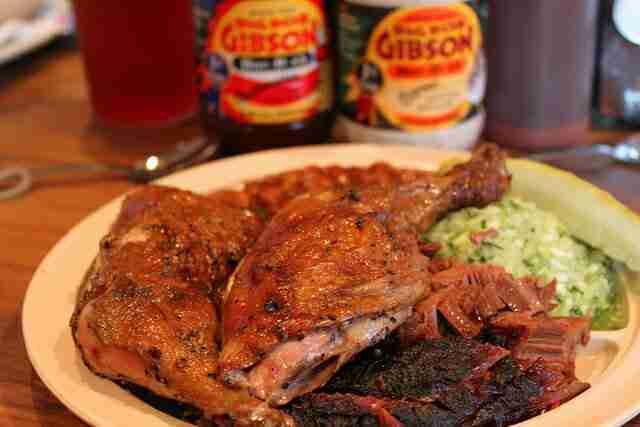 Half Chicken with Brisket, Coleslaw, Beans at Big Bob Gibson’s 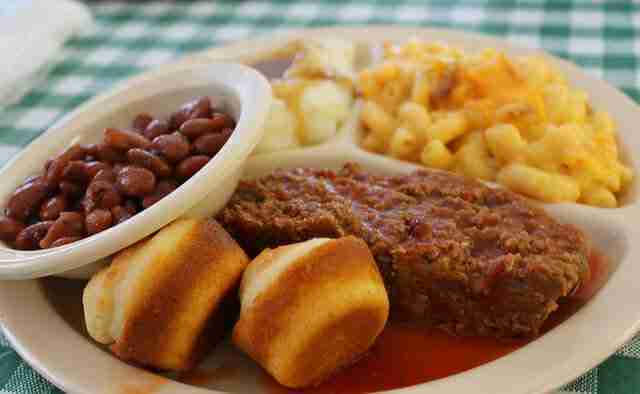 Mom and Brian were on a second honeymoon a few hours away, and they made a trip down to have lunch with me. After lunch, we drove around to our old houses and haunts in Decatur. This town has been frozen in time. Some of the businesses have changed, but the buildings haven’t. It’s as if the silhouette refuses to change. When we went back into the neighborhoods, I commented that it was like people had never left the ’80s. Brian chimed in, “More like they’ve never left the ’60s.” 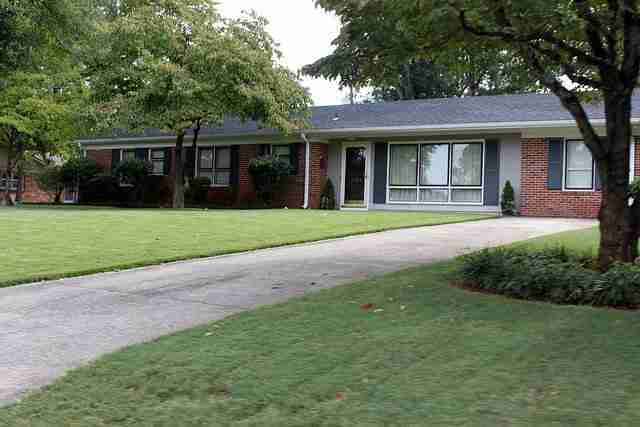 As much as we romanticize the past, this trip through the old neighborhoods obliterated any desire to return to those times. We all have outgrown this place. Mom commented on how she felt sorry for people who still lived there. I feel the same way. It’s so much healthier to let go of the past than to cling to it. I wish more people would figure that out–especially in that region of the country.

This was the original building for my dad’s Popeye’s. My first job, at 12 years old, was to stand out front in a Popeye costume and wave at cars. Just within smelling distance of Gibson’s Bar-B-Que.

I can’t express how much I loved my time back in Alabama, though. After a few days, I got itchy to return to Korea. On the way back, I had to spend the night in New York again. I stayed at my friend Artist Elaine’s house in Harlem. She has a cool place with a nice view. We journeyed to a secret Italian restaurant–so secret that I never could find out what the name was. But it was packed. The pity about the place is that most people order basic pizza and pasta there. They don’t dig deeper in the menu for the specials or the truly secret gem of the place–the cheese plate. The owner is Roman and regularly goes on trips to find rare cheeses to smuggle back to put in his restaurant. Some of the cheeses are very illegal in America. And that’s why I will never tell you what the name of this place is–if I ever find it out. You’ll have to figure out who Artist Elaine is and ask her–after she blindfolds you. But these cheeses and condiments were so intensely good and perfectly matched that my tongue went numb from overstimulation. 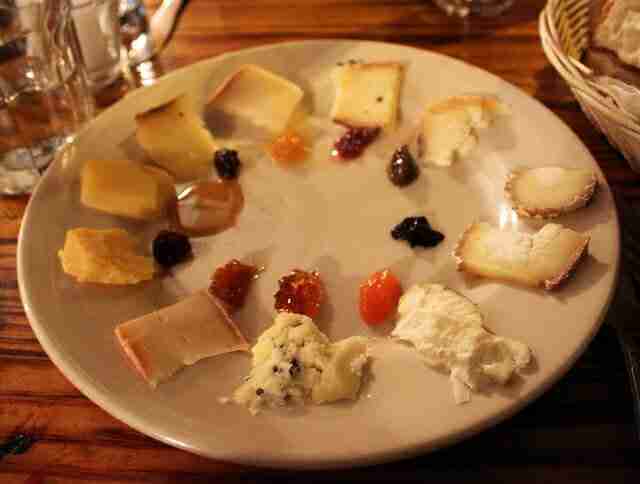 We regretted not having a notebook handy to write down our impressions of each cheese. The last one at 6 o’clock I described as “licking a cow’s balls”–in a good way.

I woke up early for my trip back. This whole automated check-in system is pure bullshit and less efficient than just doing it in person. So there is a row of touch screen computers. There are people on both sides of the check-in counters. One is for crowd control and computer help. The other is for checking in bags. So I went through the check-in process on the computer, but it had trouble with scanning my passport and asked for me to get an official. I called one over. She punched in some code, and said it was done and that someone from behind the counter would check my bag with the tag that was just printed.

My flight was scheduled to leave in 45 minutes–despite leaving the apartment three hours earlier.

I saw a lady behind the counter just walk by me and help someone else who had cued up my later than me. I called her over.

“Is there no baggage tag?”

“No sir. You’ll have to call over an official from the other side.”

Joe got a little rude.

“Ai-eesh! The official had already come over here and checked everything out and said that you would finish taking care of it. My flight is leaving soon, and I’ve just beein waiting here to be noticed. I love technology, but this new system ain’t working.”

“How long have you been waiting?”

She sighed and took down my information like a normal check-in official would, printed my tag, checked in my case and gave me my boarding pass.

There. That was simple.

After getting through security, I got to my gate (at the farthest end of the terminal) right when boarding started. But the flight got delayed by an hour-and-a-half and changed gates. So I got some breathing room. PHEW!

Got a sandwich and grabbed a few more trinkets to bring home.

The flight back was, again, not too bad. Shanghai was the rough part. I had a seven-hour layover there, and I was having a hard time staying awake. I had to get my bag checked in again at the Korean Air counter because I switched carriers there. But the KA counter wouldn’t be open until a couple hours before the flight. So I had to kill time in the main section of the airport by nursing a cup of coffee in a small coffeeshop, trying to stay awake. I originally thought I would go into town, but I was just too tired. And besides, it’s China. I technically can’t go into town without a proper visa, and I didn’t want to risk more immigration troubles this close to getting home.

The counter opened. I checked in my bag. Got through security okay, and I was in the terminal. 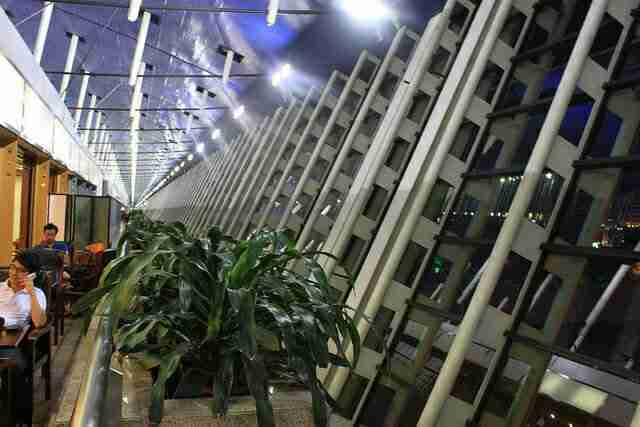 I don’t know why, but once I’m in the terminal I can relax. I grabbed a bowl of greasy noodles and easily could see my gate by all the badly dressed ajumma and ajosshies.

The flight from Shanghai arrived right when the buses shut down for the night. The plan was to wait it out until they started running again. I took out my cell phone to tell EJ I was back home.

“REALLY??? I thought you were coming back tomorrow! Just get a taxi and come home, Jagiya.”

The taxi ride cost W70,000, but it was worth it. Going over the Incheon bridge, seeing all the neon lights, I leaned my head back and soaked it in.

At home, EJ and I went through all the clothes and goodies for Jian, one by one. She was so thrilled. It was like Christmas. I took a well appreciated shower and slept deeply.

It still took me a week to get over the double jetlag. I think I was on Dubai time. But I’m back to normal now. It’s still strange to not have a hagwon job. I’m busy, though. I brought back a big project from New York that I will disclose later. I hate it when people are secretive like that, but I’m really excited, and I really can’t talk about it much until some basic funding is secured. But it’s big.

It’s cool that after all these years I’m on a more normal schedule. I wake up around 6 or 7. I have dinner at a decent hour. And I actually go to sleep on the same day I wake up.