I wouldn’t have done this if not for my daughter, Jian. 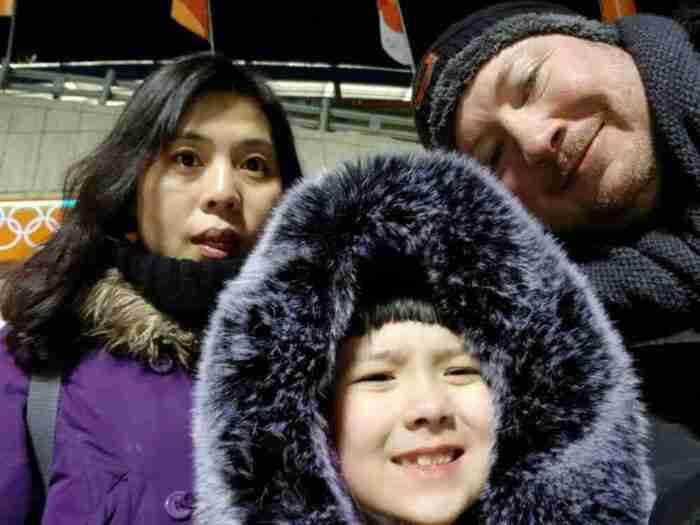 After all this time, the PyeongChang Olympics finally started. They had twice attempted to get the Olympics and got it on the third try. I actually hosted a video in 2011 that was supposedly shown to the IOC to help PyeongChang’s candidacy. (It’s embarrassing.)

I was kinda anticipating my tour business would be busy, but that didn’t happen. Same was true for other tour operators I know. I wish I had known earlier, otherwise, I would have made preparations to see the Games instead.

After the opening ceremony and the first full day of games, Jian was really into it. I was keeping track of the logistics snafus, particularly with transportation. In the midst of it, I kept seeing social media posts from friends that made me feel like I was missing out. I decided that if I was free this weekend, I’d make myself go.

It would have to be a day trip. We’d use the car. I tried to plan ahead, but it was difficult. People said to just show up and play it by ear. So we did. They also said the traffic and transportation were getting better.

The day before, I had two big tours in a row. We STILL hadn’t decided if we were going to PyeongChang or not. Saturday, I asked EJ, and she said, “Sure.”

I thought about just going and hanging out in Olympic Plaza in PyeongChang. I did see that one of the sliding sports, Women’s Skeleton, was planned for eight that evening. Jian was fascinated by it on TV. I knew that it would mean a late night drive home. But hey, that whole “once in a lifetime” motivator pushed me. In hindsight, I’m glad we did that, as you’ll see.

We got out later than I wanted. Around 12:30. The ride there was smooth until just a few kilometers outside PyeongChang. Then we were stuck in traffic for maybe a couple of hours. Part of the problem, I think, is that the area leading to the Olympics has a lot of roundabouts. Drivers in Korea aren’t familiar with roundabout etiquette, so all the traffic jams were happening at each one.

The GPS was also taking us on a roundabout route to avoid traffic. That’s fine, but it also meant we missed rest stops, where we could get some food. By the time we got to the Park & Ride, we were starving. I myself hadn’t eaten all day, and the girls had skipped lunch. It was 6:30.

We got on a free shuttle bus, and I decided to head straight to the Alpensia Sliding Centre to buy our tickets. Ticket sales have been so slack that it’s easy to get them for the events. Besides, trying to pre-book them was the usual Korean internet complicated pain in the butt. By then, Jian was extremely cranky, and EJ was on her last blip of patience. We had hoped to get the tickets and go into town to eat dinner. EJ wanted to save money and wasn’t really into sports, so she planned to stay in a coffee shop while Jian and I went to see the event. The traffic was so nuts that it killed that idea. There were no coffee shops near the sliding centre. No place for EJ to wait. So we bought tickets for all three of us.

Honestly, I think EJ had the best time.

After buying the tickets, we were directed to a tent, where they gave us some hot packs and a headband with a Japanese flag on it–because that was the only flag they had left.

I’ll admit, I was jaded. When we saw all the lights from the ski slopes and the ski jump tower, I got excited. 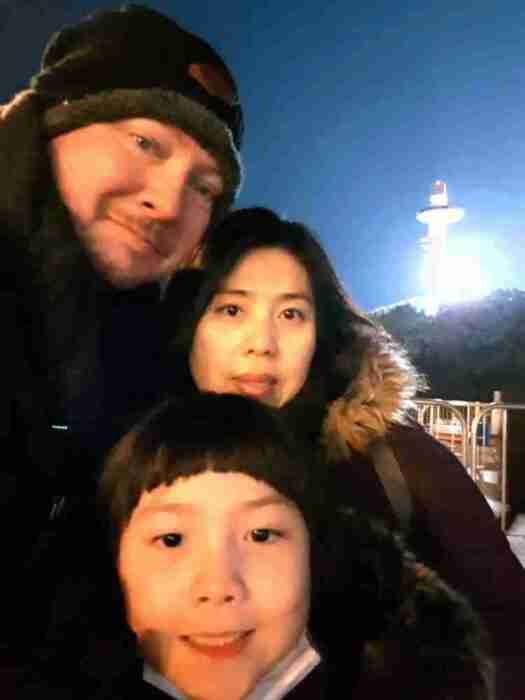 As soon as we got through security, we went straight to the concession stand. Microwaved pizzas, sausage on a stick and a couple ramens. Jin Ramyeon never tasted so good! 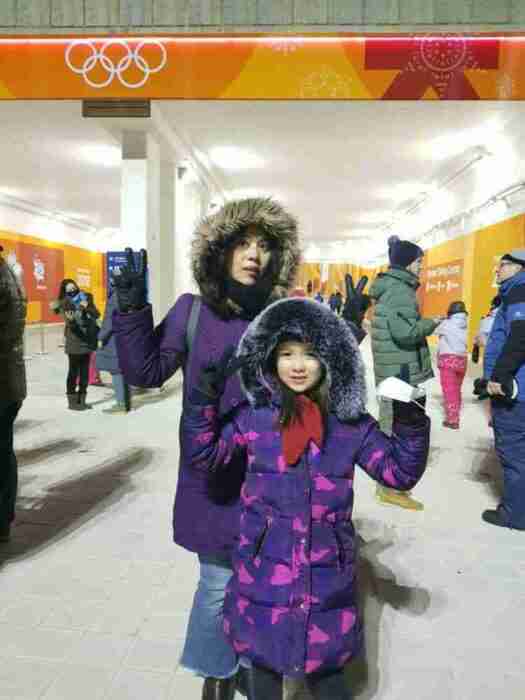 Replenished and in better moods, we hiked the trek up to the sliding centre. By this time, Jian was getting cranky enough to boycott my family photography attempts. 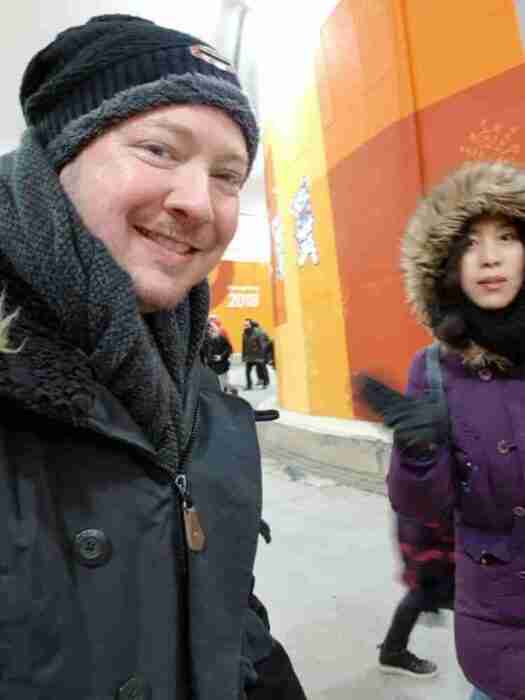 We went up to the spectator part of Curve 14, which is the fastest curve. EJ and Jian installed special hot packs in their shoes, which I had bought earlier. EJ started getting into the spirit.

Jian, not so much. 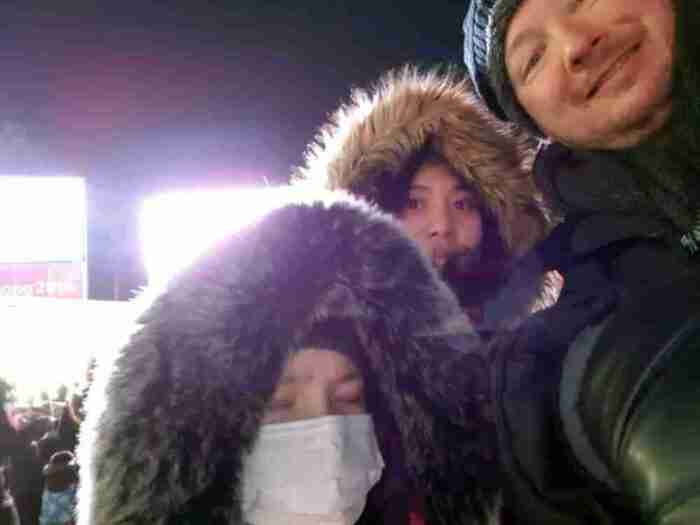 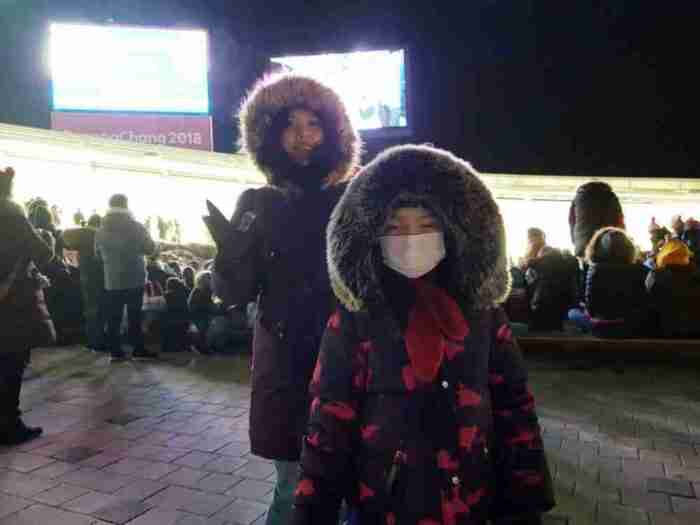 Great timing. We didn’t have to wait long. They had a couple of “forerunners” test the track before the athletes started. Just watching the forerunners got the crowd gasping. We staked out our spot a little higher on Curve 14 to afford us a full wraparound view. Jian stood on the top of a snow bank.

Since I was a kid, I had wanted to see Olympic sliding events in person. This was one check off the bucket list. Jian was grouchy most of the time, but today she’s really happy she did it.

People have asked about how cold it was. I had dressed in three layers of long underwear, so I was not only fine, I was sweating.

After watching a good many runs, we trekked down further, where we briefly got on TV. 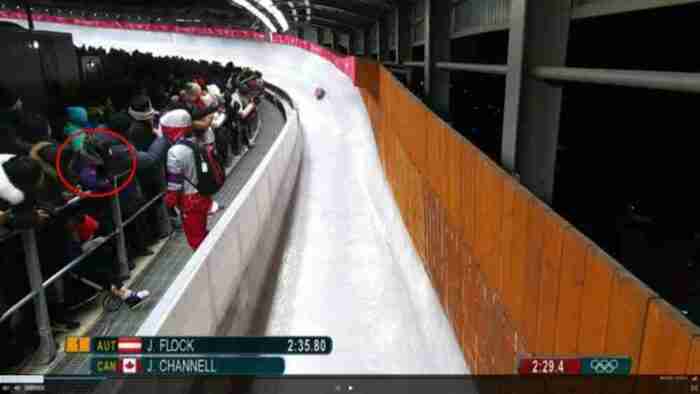 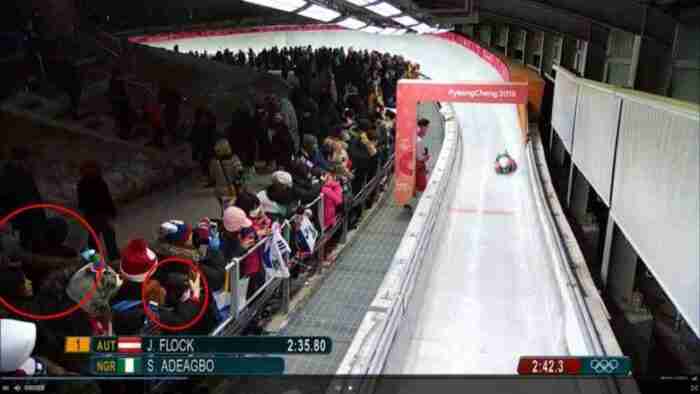 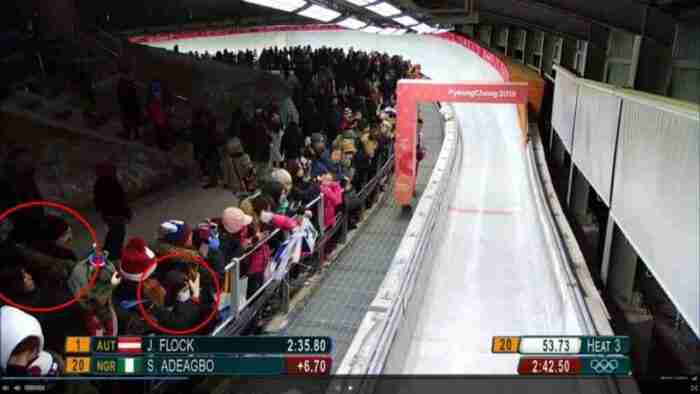 Oh, and the stuff you miss the first time. 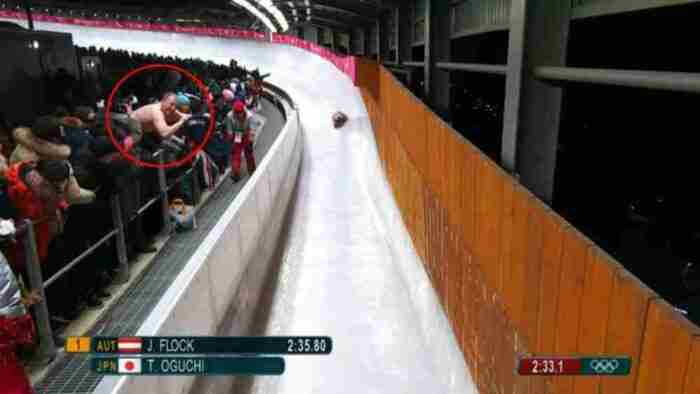 There were two heats that evening. Yet after the first heat, the girls were too cold. So we headed back down.

We got a shuttle bus to Olympic Plaza, but it looked like things were closing down. We got good glimpses of the stadium and the Olympic flame. That was enough. We grabbed some dumplings for the ride back and walked the few blocks to our shuttle. We did have a scare when we were crossing the street with a crowd rushing to get in line for the shuttle. Jian got lost in it. We searched and called for her. She didn’t answer. We found her further up the line, but we got so upset (with ourselves) that we both tightly held her hands the rest of the time.

We got to the car at 11:30. The traffic getting out was nasty. I only needed to stop and rest once. We got home around five in the morning. When we got near Seoul around 4:30, we were getting passed by souped up sports cars. They were either using the wee hours of the morning to play, or they were street racing. I had read that around Seoul and Incheon there was a problem with street racers. It was kinda scary and put me on alert. 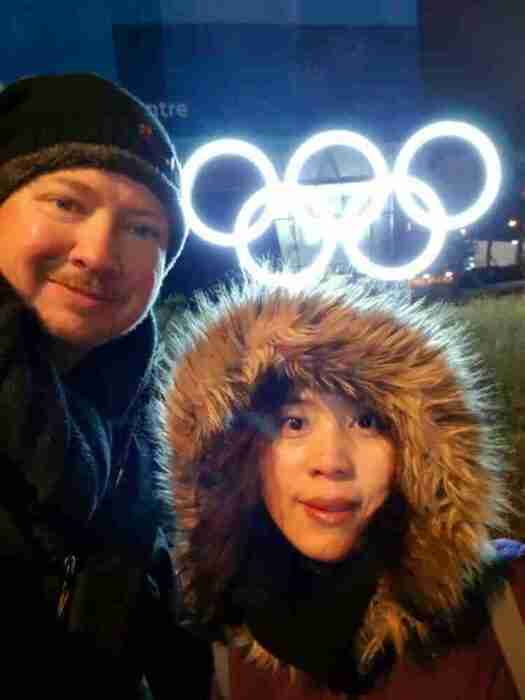 In hindsight, I’m glad we did it. The girls didn’t share my philosophy that a good struggle makes for a good journey.