Mommy and Baby are Home 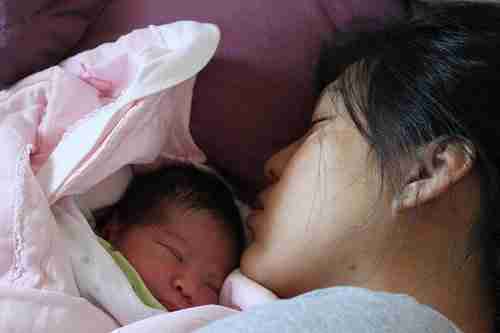 Now for the rest of our lives to start.

The rest of the hospital stay went smoothly. I slept on the couch in the dry hot room with no blanket, but I slept deeply both nights. I continued to help EJ get around and do things she normally can do on her own. She’s healing okay now. That was a really rough birth for her.

You know, I always think that a father should be in the birthing room, but it’s the most useless thing to do. You can’t talk to or touch your wife because it annoys her. You can’t relieve the pain. When the baby’s coming out, you just stand to the side trying to figure what to do with your hands to look properly concerned. The only use I was that night was for pushing the nurse call button. It wasn’t until we came home yesterday that I finally felt useful. I changed a diaper.

The last day was a bit hectic. We woke up early that morning so that EJ could do more of her treatments, see the doctor and wrap up the bill. The documentary crew that has been following me around felt it would be a good wrap up to my story to show us with the baby. And even though it sounded inconvenient, I agreed. It would make a nice bookend to the story. They showed at 10 o’clock. And they’re really nice and relaxed. So even though EJ was a little stressed about it at first, she was cool when they arrived. The nurse brought Jian at 10:30, and the camera caught my first time holding my daughter. They then shot us leaving the lobby, and it was done. We took a taxi home. Mommy and baby went straight to bed.

Now for the complaints. There was an exit survey, and EJ made room to complain about the poor bedside manner of the nurses when she was in labor. My complaint, as I go along, is the lack of education given at the hospital. I think even at the breastfeeding class the nurse didn’t teach EJ how to get the baby to latch properly.

Maybe this is where my experience comes in handy. I knew about proper breastfeeding and burping as well as how to change a girl’s diaper, which is different from a boy’s. They didn’t teach any of this at the hospital. I went out to get some beef and banchan for MiyeokGuk. When I returned, I saw that EJ had put Jian’s diaper on backwards. I think the only thing the hospital taught her was how to wrap the baby like a burrito in her blankets.

Don’t get the idea that EJ is incompetent. She’s been very attentive and instinctive. There were just some things I knew from experience that the hospital should have taught her.

I’m very proud of my daughter. She can fart better than me. She cries deeply and loudly. She’s not prissy.

At home, I got to look closely at her body. Her skin is peeling all over, but they said it was normal. Her legs are long and a little bowed. They’ll right themselves within months. Her toes are also long like mine.

The challenge is getting mommy and baby to sync up with nursing. EJ is producing milk, but it’s not flowing freely yet. Jian has to work for her food. The hospital nurses gave her formula in bottles, and we’re having to undo the damage. She doesn’t have to suck much on a bottle compared to a new breast.

Am I talking too much about my wife’s boobs?

I was expecting a long sleepless night. But it wasn’t so bad. We had planned from the start for mommy and baby to sleep on the mat in the living room, where it’s warm. Somehow I ended up with the baby, and she slept next to me in the bedroom until she woke at 4. Then she fed a bit, and we got some more sleep until 9 when the helper ajumma came over. She’ll come every day for two weeks from 10 to 6, cleaning, cooking and helping with the baby so that mommy can recover.

Little girl is a bit of a complainer, but she usually calms down when daddy holds her. I hope mommy finally gets the rest that she so deserves.