I arrived in Korea in 2004. I already had an interest in the country because of a couple courses in Korean history I took. The plan was to stay a year, but when that first year was up, I looked at all the change happening around me. This was a part of the world where history was happening in my lifetime. I decided to stay and witness it.

And my, what I’ve witnessed!

There are lots of smarter people than me commenting on Park Geun-hye’s impeachment. I ended up witnessing the whole demonstrations from beginning to now. This wasn’t because I wanted to go out and see them. See, I run The Dark Side of Seoul walk every weekend. It’s like a mix between Jack the Ripper tour and a haunted tour. It’s gotten fairly big lately. The route starts at Anguk Station, near the north part of Insa-dong, and winds its way through north Seoul, ending up near Seodaemun Station. That ended up being precisely where all the demonstrations were. I watched it grow from the usual spatter of professional protesters. I mean, we joke that protesting is one of Korea’s past times. Summer and fall are protest seasons. The year before, people were protesting the government co-opting of history textbooks. I had to work around that on the tours. One couple I had from Singapore ended up getting some spray from a water cannon. I apologized to them, and they said, “No, this is great! We don’t have anything like this in Singapore.”

This past season, when the protests started, I had some experience with this, so I prepared alternate routes. Our peak season starts in October, which was precisely when I had my seizure and fractured my back. I did my best to get back on my feet and do the tours with my lobster shell back brace.

The protests grew and grew. The hard part was that I couldn’t predict where they would be. They usually centered in Gwanghwamun, and we’d just cut through the crowds to continue the tour. Other times, they’d block the north part of Insa-dong or Sam-il-ro. So every weekend, I was in the middle of the crowds. The guests on the tours loved it. I noted that the tenor was changing when I saw families attend the protests. Children walked with their parents with a candle in one hand and an ice cream in the other.

This is a CRUCIAL learning moment for protesters around the world (are you listening anti-Trump peeps):

If you want the regular folk to support your cause, you need to make your protests a safe space. No smashing windows. No firebombs. No fights. Make it a festival that people would want to bring their kids to. Make it something where the elderly would want to join. Otherwise, it just looks like a bunch of 20-somethings getting their rocks off.

The riot police were good and polite the whole time. They’re mostly kids doing their required public service. They’re in little phalanxes, each with a pennant with a different color and number. It’s amusing to watch these guys run into action whenever a radio pipes up, telling their leader to move to a different location. It’s like a human-sized chess game–or Twister. In fact, the only time I was approached by the police was last Saturday when I was starting the tour. He told me (in Korean) that the area we were in was about to be blocked off. I told him we were going to leave in five minutes and pointed where we were planning to go. He said that that direction was already blocked off and told me an alternate route. He smiled and said he was sorry. I said it looked like a fun route, and we laughed.

The protests started interfering with the tours when the parliament voted for impeachment in early December, and the hearings moved to the Constitutional Court. That is RIGHT AT THE START of our tour. It’s usually empty when we go there. But after that, it was impossible. All the protests and police moved there. Before it got completely blocked, I moved the group to a Starbucks stairwell, where we could observe the building, while I told my stories.

Since it’s an outdoor walk, I close down the tours during the winter. Last Friday was the start of our new season. And like an idiot, I planned it on the day the court was announcing its impeachment decision.

I had a few people signed up for that tour, but I knew it was going to be crazier than it had ever been. I watched everything closely. Pro-Park conservatives finally started demonstrating. They were an ornery bunch and kinda late to the party. There was a lot of speculation that they were paid to be there, as when journalists asked why they were protesting after all the things President Park had done, they drew blanks. It got violent. (Note, it didn’t get violent until the Right got involved.) It got worse and worse, and I watched it closely. Then the news came out that a couple of protesters died right where we meet for the tour.

I can work around protests, but I can’t put my guests in dangerous situations. That may sound callous. I mean, people DIED. But that was a point also. I learned from doing the tours soon after the Sewol ferry disaster that it’s hard to do a ghost tour when real life is darker. It was disrespectful to continue with the tour that evening.

The next day, as I was checking Facebook, one of my journalist friends posted a video of Robert E. Kelly and what is now his famous video-bomb by his kids on the BBC. Just like “Gangnam Style,” we all sat there with our mouths agape as this thing blew up all over the Internets. I’ve never met Professor Kelly in person. He is way down in Busan. But we run in the same circles and have interacted with each other on Twitter. That’s another thing I love about living here. The expat and international Korean community is small and tight knit. We all know each other. We’re an odd family.

It was cute. And as expected when something goes viral, there was the pushback. It was much, much smaller than I anticipated. Just some stuff about patriarchy and crap. I get how the video can be a metaphor for patriarchy. But the reason he didn’t get up was that he was wearing jeans, we later discovered. I don’t disagree with the sentiments behind patriarchy awareness. It just loses people when you look like a naked opportunist, hijacking a popular cute video to promote your cause. The backlash against the patriarchy stuff was stronger. 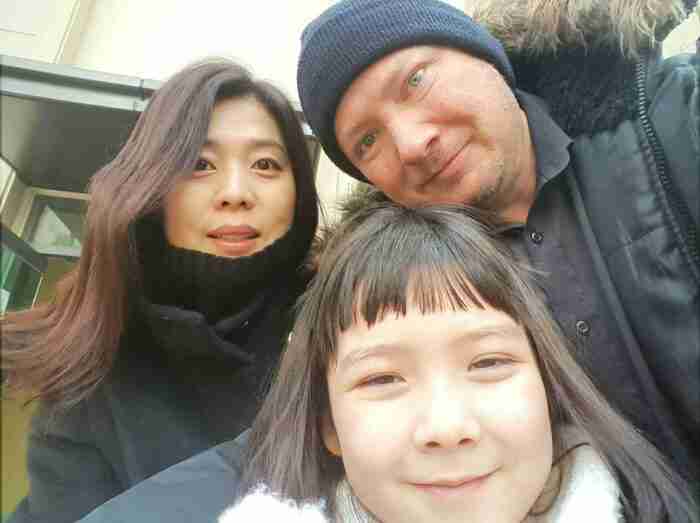 What did bug me was the nanny thing. This was personal,  and I was aware of it. People were assuming that Robert’s wife was the nanny. They said it looked like someone who was worried about their job and other excuses rather than admit that they were going on stereotypes of Asian women with non-Asian men. As one Twitter person stated, just admit that you had a latent racist moment, learn from it, and move on.

It hit me personally because there are so many racist stereotypes about western men with Asian women. “Yellow Fever” and all that. Angry Asian men who don’t live in Asia dismiss mixed race couples. Still perpetuated in clandestinely racist posts with outdated facts and hiding inside a cloud of freshly learned academic jargon while saying absolutely nothing. There’s the stereotype about Asian wives being subservient, WHICH IS DEFINITELY A MYTH. In Korea, the mainstream media does whole news segments about the dangers of foreign men to Korean women.

Those of us who married for love and have children find this disgusting. I mean, how dare these people feign moral superiority while trashing our marriages. Our kids have a hard enough time dealing with a place as homogenous and, yes, as racist as Korea. We don’t need them feeling even more isolated because of stereotypes people have about their parents.

When a lot of Korean kids are getting ready to enter elementary school, they are busy learning to read, basic math, some foreign language. My wife and I? Our priority was preparing our daughter for the inevitable racism she’d have to face. My wife stresses so much over her social skills, which I think are fine. We made sure she developed her social intelligence early. And really, she’s done well so far. She’s been in the popular groups through play school and kindergarten. Other friends’ kids have had more problems. She started elementary school March 2nd. She seems to be fine there, but I do worry. The older kids, especially the groups of boys that want to impress each other, can be mean. Yesterday, I picked her up from school. As we were leaving, a group of older boys noticed the foreigner (me), and one said, “Holy shit” in English, trying to get a reaction out of me.

He got a reaction, and I don’t think he liked it.

So I worry about this. Maybe this is why the nanny comments bugged me. People are dismissing our families with their narrow assumptions.

Whatever. I’m talking out my ass as always.

Since my injury, I’ve kinda closed off socially. I was busy with the tours, which have been growing like crazy. Other than that, I’ve been concentrating on my health. I’m eating better and exercising. I’m 85% vegetarian these days. Can you believe it? It doesn’t mean I’m eating tasteless food. The opposite. Eating some amazing foods these days.

Last year was tough, as you know. After meeting Anthony Bourdain in October 2014, I’ve had a hard time steering my career boat. I’ve realized that I’ve lived my life the reverse of other people. Most people concentrate on their jobs and making money. Then they check off their bucket lists. After Bourdain, I noted that most of my bucket list had already been checked. Last year with the restaurants, I checked another one off. This year, I know what is working, and I’m concentrating on that. I’m consulting for a restaurant on the Cruise 378 boat in Apgujeong, moored off of Hangang Park. I’m concentrating on tours and the occasional writing gig, and I have gone back to teaching part time to fill in the gaps. Later this year, I hope to join an old friend of mine setting up his new business in Korea. I’m not chasing any spotlights. I’m just doing my thing now.