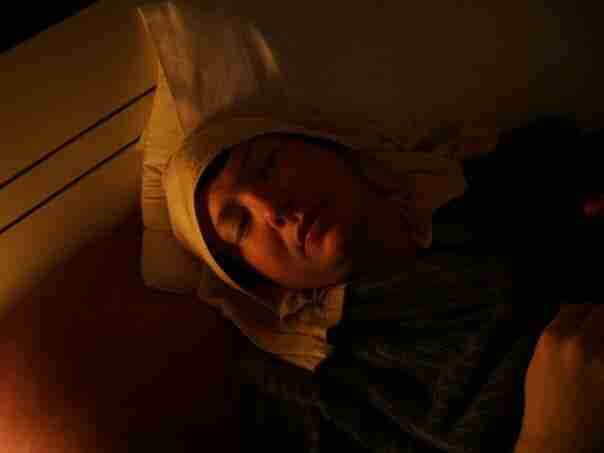 The fever returned with a vengeance. This was exactly was Eun Jeong had the week before. I went to work on Friday with just a headache, and it developed into the one of the worst headaches I ever had. I violated all the sensible over-the-counter rules and took nine aspirins that day, and they didn’t even put a dent in the headache.

I slogged, and slogged and slogged through all the classes. At 8:30 I felt so bad that I knew I couldn’t take the jerky buses home. I planned to take a taxi. Chris suggested that he drive me home. I agreed. He had to make a stop over at Hagwon-ga to pick up a pellet gun he had just bought. I stayed in the car. He was gone for a good twenty minutes. When he came back, the battery had died. Chris called the friends he was just meeting to come over and give him a boost. It took a while for them to come. When they finally showed, a bus decided to park and block us. It was comical. Chris and company persuaded the bus driver to move, and Chris finally got the jump we needed. I didn’t get home until 10:00.

The headache didn’t subside all Saturday either. I canceled going survival gaming Sunday morning. The sickness started clearing up by noon Sunday. I thought I’d go ahead and head to Seoul to do the Seoul Survivors podcast. I was delirious most of the podcast.

Monday everything finally cleared up for good. Eun Jeong, at the last minute, decided to have a nice intimate New Year’s Eve party with just the two of us. We went to E-Mart for some grocery shopping and also got some sparkling wine, some brie and a celebratory cheesecake. We had a great time together that night.

The rest of the week was fairly uneventful. I worked on future articles for SEOUL Magazine and The Korea Herald. We rarely went out of the house. I was just pooped. I thought I would do a few things during vacation, but I had no energy.

Sunday morning I joined Chris at 8 AM to do survival games. It took place at an abandoned neighborhood. We believe this is the land that Anyang and Seoul have been disputing over. There are nice new houses here that look hastily evacuated. Windows are are broken out. Some furniture and small appliances are still in them. One house was littered in Buddhist lanterns. 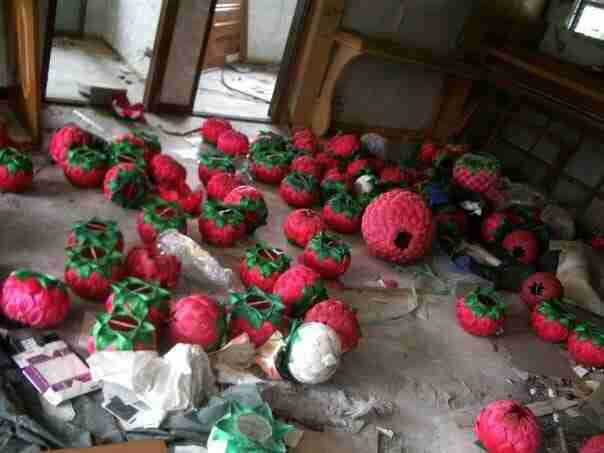 The group was an equal amount of Koreans and foreigners. The Koreans had been doing this for a while. The guns are high powered and shoot BBs. And they can actually break the skin, as I saw on one guy who came out bleeding on the top of his forehead.

In the beginning, I had come to the conclusion that this was not for me. For the first few rounds I was the first person shot, getting smacked in the knuckles and one time right on the goggles while poking my head through a window.

Then we had one round where my cowardly self got a nice gun and perched at a second story rounded window. From my vantage point I could suppress people’s movements and get good aim. I got my first hit in that game (took a lot of ammo to do so), and I ended up being the last man standing. It started to become more fun yet not fun enough to wake up early each Sunday morning to do.

I left the group early to go to Seoul to do the weekly Seoul Survivors podcast. The Starbuck’s we were supposed to record at had gone out of business, so we did the show at the Dono Studio next door.

When work started back up again, we had to do morning intensive courses. On Mondays, Wednesdays and Fridays we have to show up and teach class three hours earlier than usual. I have gotten used to sleeping in and coming to work in the afternoon. So these days I consider it waking up early when I have to come to work at 10:30.

As a result, this has been the longest week I’ve had to slog through in recent memory. There are days when you feel that Thursday is Friday. Well, this week I have felt that Thursday was Saturday.

The usual new year mass migration has occurred. Any time one of my classes reaches an advanced level, the mothers get the idea that their children need to change schools. Then I’m stuck with beginners again. One class I had been working on since my first days at the school. All but two left after December. And those two will be merged into someone else’s class. Why are they always merged into someone else’s class? Why can’t they merge into a class that I teach? It would be nice, for once, to teach something a little more advanced than “What color is this?”

Then again, that’s what you get for being the teacher who tricks his students into eating soap.

UPDATE: I have been corrected. They are going to be grouped into my Monday 7:00 slot. I’m happy.

OKAY, ANOTHER UPDATE: That final class, as of now, has been canceled. So I actually have my last period free. Happier.Eun Jeong has left to visit her mother for two weeks. I’m already feeling lonely.

We’ve also had a little good news on the legal front recently. Still no sign of getting the money we’ve been pursuing for over a year and a half. But any worries over remnants of that old criminal libel business are gone for good.

I’ve decided to cancel my trip to the ice fishing festival tomorrow. I’m too tired. I still need a full day to work on articles, mostly experimenting with recipes and taking pictures. And the people I wanted to hang out with during the trip have also canceled.

That seems like me lately. I fill up my weekends with plans just so I can cancel them at the last minute.

12 thoughts on “Guns and Survivors”