I’ve basically summed up my weekend on the Food Journal already.

In our personal lives, things have been going up and down like the weather. Eun Jeong got hired for a job that she wanted. But the next day she got a call saying that they weren’t ready to hire someone yet.

We’ve also found out that come June our apartment’s key money will go up to 80 million won, which we can’t afford. We’re going to have to move. That makes me sad.

On the bright side, we’re looking for a bigger apartment, even though it likely won’t have the great view we have now. We have also been talking more seriously about future business plans. As always, everything depends on a series of ifs.

This weekend was the big blogger party at Seoul Life Cathy’s. I’ve gone into more detail about the food preparations in the Food Journal.

I had made a lot of stuff that was held in jugs–lots of milk jugs. In fact, Eun Jeong accidentally poured some Oyster Bisque into a glass and said, “Joe, this milk tastes funny.”

So we lugged the jugs. I spent so much effort trying to remember everything that we were bound to forget something. This time, it was the camera. And the rule is that whenever I forget the camera, I see something that needs its picture taken.

In this case, we passed by one of the many mini campaign rallies on the bus past E-Mart. It had the typical Bongo truck playing loud bouncy music. Campaign volunteers in matching t-shirts doing some sort of silly line dance. What made this different was what looked like a 60-year-old man in biking gear, dancing with his bike lifted high in one hand, like it was a pom-pom.

Finding Cathy and David’s place was a bit of an adventure. They live in the French district of Seocho.

Yes, there is a small “French town” in Seoul, and you notice it right away. Concrete structures give way to nice brick buildings with wrought iron trim. Nice little cafes dotted the street with warm interior lighting.

We saw Epicourageous Daniel while driving up into their neighborhood. He was ringing the doorbell of the wrong place. His hands were full with a box of homemade persimmon pies. We walked around for a while on the phone with David giving us directions. It turned out that we had passed their place a while back.

Cathy and David have a nice place. We were some of the last to arrive. Sandra from hereinkorea and Jennifer from Between Pee and Kimchi were there with Jennifer’s sons and mother. The two boys, even though I’m sure they were bored, behaved wonderfully. The oldest was very bright–and better yet, he brought his collection of Star Wars Transformers!!! That’s bad when I neglect a party to play with Transformers. I’ve also discovered with the advent of computer-aided design, they’re a lot more complex to transform than they used to be. I miss the old days of M.A.S.K. where you just pushed a button, and the spring-loaded wings flew out of the sides of the helicopter. 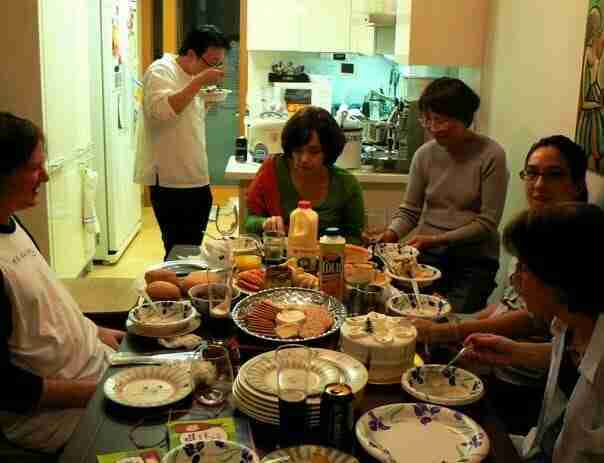 The food, drinks and conversation were great. I have missed seeing Cathy and David for a long time. This was the first time I had seen them since their daughter Susanna was born. Eun Jeong spent a lot of time with Susanna. 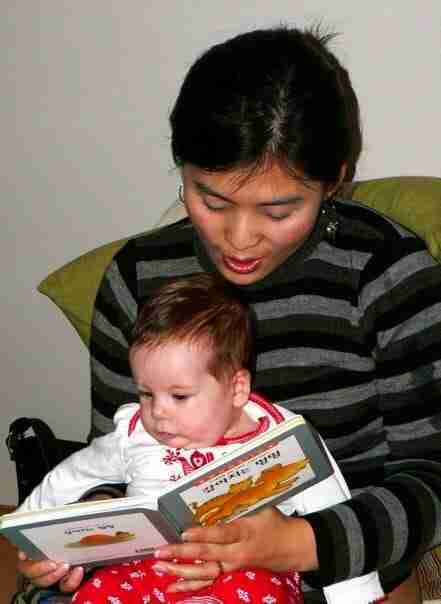 I got to reconnect with David, who is someone I have been wanting to be closer friends with. I did the ultimate evil in showing him the game I’ve been addicted to, Team Fortress 2. He bought it on the spot, and I’m looking forward to playing the game online with him when he returns from China.

This was the first time Eun Jeong had met Cathy and David, and she really liked them. So it looks like we’ll hang out more. Yea! We have more couple friends!

Besides, C&D have been raving about this Italian restaurant in their ‘hood, and I want to check it out together.

Sunday morning I spent munching on leftover foie gras, cheese and wine while talking to my dad for two hours on Skype. We had a lot to catch up on because we hadn’t talked for months.

That afternoon, I convinced Eun Jeong to go out so I could get a much needed haircut. Like Madonna, I need to change my look every six months.

Before we got our haircuts, we went to New Core Outlet for some shopping. Eun Jeong wanted to cash in the points on her point card. She got a whole 5,000 won… heh, heh. We found a nice winter coat for me, even though it’s already starting to lose buttons (that’s fixable). We also got me some flannel shirts. Somehow she likes me dressing like a Canadian lumberjack these days. She bought herself some gloves, and we looked at the tacky Christmas stuff–which I want.

I can’t believe I still haven’t gotten out the tree. I was planning to two weeks ago. Well, at least we have had a good Christmas party this year.

We went to our usual hair place, where the guy majorly did a chop job on my noggin–per request. Eun Jeong lightened her hair and lopped off a good bit herself, though she wasn’t brave enough to cut it as short as I dared her to. It took over two hours for all this, and I got well acquainted with the Wondergirls’ “Tell Me” song, as it was played on a loop outside with doumi girls dancing to it, advertising for some other small business opening.

Eun Jeong had gotten it into her head to eat king crab for dinner. I knew of a place that looked popular. I, again, detailed it in the Food Journal. The meal, with drinks, cost us over 90,000 won. WOWSERS!!!

But it was g-o-o-o-o-o-o-d. I took pictures the whole time not for memories but to post them and make my mom envious.