And that was a good thing.

Saturday was my only true veg day. Chris and I had each bought a pre-release copy of Team Fortress 2 (official release October 10th). I haven’t played a multiplayer shooter since Jedi Knight in 1998, and that was on a phone modem. I suck at these games, but it was fun. It’s more fun when Chris and I are talking on the headsets while playing, and our fellow Korean players are talking to each other in Korean.

We were up until four a.m.

I was awoken at 10 on Sunday by Eun Jeong kissing me goodbye as she headed to her mom’s house for Chuseok. I couldn’t go back to sleep, so I started the day. I had run out of coffee, so I was groggy for a long while–too lazy to walk down and buy some.

Besides, I wanted to play more GAME!

Kurt and I had talked about getting together at the Wolfhound (in Itaewon) for some Irish food and beer. We met around 3 o’clock. My lack of sleep hit me on the subway up, and I was a zombie for the rest of the day. I felt like I was wrapped in cotton and couldn’t hold a clear thought nor pay attention to anyone else’s conversation.

Kurt didn’t seem to mind. He likes talking about the movie he’s writing, and he had enough energy for the both of us. Combine that with the arrival of Jason and his toddler son, and I didn’t have to do any work at all. Jason, who owns a recruiting agency and acts for TV shows in the meantime, talks like a never ending stand-up comedy routine. Very energetic and entertaining.

I had my bangers and champ, some liquid sustenance in the form of Guinness, some of Kurt’s shepherd’s pie, and half a cheeseburger. We headed to the Austrian butcher, Chef Meili’s Deli, underneath the Wolfhound, to look at the sausages. 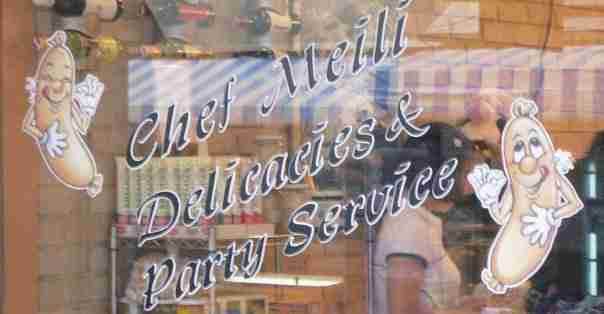 The owner, Chef Christian Meilenger, was there with his lovely Korean wife, who runs the shop. Meilenger also owns and runs the new Chef Meili Austrian restaurant, which has replaced the sad dour German restaurant Memories behind Gecko’s.

Chef Meilenger also taught some classes at a Korean culinary school for a while, too. He stopped teaching so he could concentrate on his businesses full time. He makes most of the sausages, meats, breads, and condiments himself. He’s knowledgeable about many foods and has some strong opinions.

Kurt asked him about a tin of foie gras in the case. Chef Meilenger said that he had only one and another foie gras in the back that a customer had specially ordered but wasn’t able to pick up. He brought it out.

I couldn’t resist. I bought the lobe of foie gras on the spot, along with some more sausages and sauerkraut. They saved them in the back for us so we could pick them up before heading home.

Kurt had originally planned to go to Syd ‘n’ Mel’s for steak. Yet Chef Meilenger had convinced us to have dinner on the Biergarten Terrace of Chef Meili. On the way out, we also met Chef Meili’s sous chef, Christoph–a young man from Austria who has been in Korea for a little over three months. We have since invited him out to join us on our excursions.

We met up with Reg–oh, Expat Jane, and walked off as much of the Wolfhound food as we could. Kurt bought a leather jacket, and we hung out at McDonald’s a bit so that Jason’s son could indulge in an ice cream. Jason enjoyed scaring Jane.

Jason and his son headed home. The three of us walked around until our reservation time at Chef Meili came. We sat on the rooftop Biergarten, and everything was perfect. There actually was a bit of a view of Seoul, which is rare in Itaewon restaurants.

We went nuts on the menu. I’ll detail it more in the Food Journal later. I want to return and get better pics. I’ll give you a preview.

Jane ordered Pork Medallions with Spaetzle in what I think was a type of cream sauce. I had a bite of the Spaetzle, and it was amazing.

Kurt and I ordered a Chateaubriand — a hunk of tenderloin seasoned to perfection and cooked medium rare. Chef Meilenger himself carved it tableside while sous chef Christoph looked on. 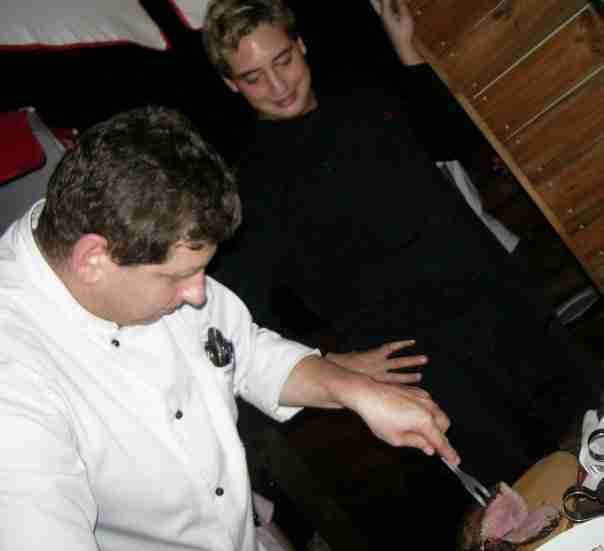 We then ordered THREE desserts. I don’t remember the names of all. There was a Sachertorte and some cherry dumplings. I forget their names. I was sleepy, hungover, and drunk. Sorry. Here are the pics. 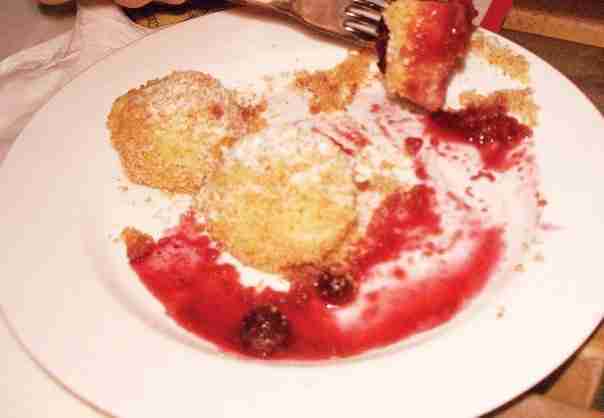 Photo geek note: I hate using a flash on food shots because it washes out the colors. I took a tip from one of my digital photography podcasts and covered the flash with a napkin to diffuse the harsh light. Seemed to do a good job.

After a lengthy dinner and great conversation, we picked up our meats and worked our way home. Jane and I went to the Lotte Mart at Seoul Station to pick up some Chuseok gifts and to get me some coffee. On the way there, the sauerkraut container popped a leak and wet all over my crotch. Jane gave me the name, SauerKrotch.

We walked into Lotte Mart. Now, I’m used to Korean kids staring at me because I’m different. This time, a kid sitting in a grocery cart actually reached out and grabbed me as a I walked by.

I got some stuff for Brant and Terra and my coffee. I then took the bus home. I enjoy that bus ride from Seoul to Anyang. It’s very comfortable and quiet.

On Monday, I made a huge Austrian lunch with Blutwurst, grilled baguette, Sauerkraut, and some Dunkass I fried up in butter like Schnitzel, topped with crumbled cheddar cheese.

That was a good heavy lunch. In fact, I skipped dinner because of it.

I packed my stuff and got on the bus back to Seoul Station. At Seoul Station, it took twenty minutes for the bus to arrive for where I was going in Ilsan to meet Brant and Terra.

Brant met me, and we headed into the hospital to see his freshly born son, Harrison.

Cuteness. And it’s great seeing Brant go gah-gah over his son. He talks to him in a little voice and sighs whenever he thinks about him.

Terra and Harrison had to stay at the hospital for Chuseok. The reason for my presence was to accompany Brant to Terra’s mother’s house for Chuseok.

Before then, we went out for some drinks and a little Chicago pizza. Back at Brant’s place, we shared some Leberwurst (from Meili Deli) and crackers while watching TV.

The next day, we took the subway and taxi to the Kims’ house. Brant said that their Chuseok was fairly casual and short. I met Terra’s cousins, uncles, and aunt. Three of them could speak good English, and we talked a lot about Korean food (easy long winded topic for me).

They performed the Chuseok ceremony.

Since Brant was part of the family, he had his first chance to bow and take part himself.

Again, I’ll detail that more in the Food Journal later. Here are a few pics to tide you over.

After dinner, we went our separate ways. I had a little time back in Anyang to relax, recover, and play games. I had a party to go to at 8.

Friend Lee had been planning a party at Irish Dream for a few weeks. I had been skipping parties in the past, so I had to show up for this one or be a total jerk.

When I got there, Friend Lee was the only person I knew. After a few years in Korea I’ve become wary of making foreign friends because they are only here temporarily. Also, I’ve run into more than my share of freaks, bland midwestern stereotypes and negative overgrown adolescents–and I just tend to avoid foreigner gatherings.

Well, well, well, there seem to be some decent and interesting people still out there. I met Chris from Richmond, Virginia, Paul from Ireland (I think), Brian from New York, and Ivan, Matt, Jenny (?) and loads of others from New Zealand. I also have a new Korean friend, Joelle. Cute as a puppy chewing on a sock.

Being a party, some games were played. The first game was for couples. It looks like it’s a common game, but it was the first time I had seen it. The couples have to stand on a piece of newspaper. In each round, the newspaper gets folded in half.

Then there was Twister…

Which made for some interesting shots.

And lastly, there was the Yardie. It’s funny. In most all the games the Koreans in the crowd dominated.

We did a little dancing. I got to act like my prize-winning goofy self on the dance floor. I then had lots of interesting conversations about New Zealand, politics, and food and went home around 3:30.

My last day of vacation, Wednesday, I spent cleaning the house thoroughly and doing laundry. As a reward for finishing, I played MORE GAME.

Eun Jeong got home around 5. She wanted to go out and get a simple Samgyeopsal dinner close by. Unfortunately, the local restaurant was closed. We walked around a bit, and I suggested we head to downtown Anyang.

We ate at a Shabu-Shabu place I had been to once before. I normally find Shabu-Shabu boring, but I was in the mood for something gentle on my stomach.

I had noticed that a branch of the freaky Dr. Fish Cafe had opened across the street. I had seen this on TV and in the mortar at Ewha University. I didn’t get to partake in it at Ewha because they had a wait, and we were short on time. So Eun Jeong and I tried it out after dinner.

We ordered a cappuccino, a smoothie, and two Dr. Fish.

You go to an area and wash your feet. Then for fifteen minutes, you put your feet in a tank of little fish. The fish nibble the dead skin off your feet.

And it was fun! Everyone who tried this there, including Eun Jeong and me, squealed when the fish tickled our feet. I learned to get used to the sensation and actually relaxed. It felt good.

This was one of those situations where I knew I should have gone out the door with the camera. It always happens. Interesting stuff goes on, and I don’t have the camera.

My feet are so thick with calluses, that I’m going to have to make more trips for the fish to make some decent effect. Nonetheless, both Eun Jeong and I felt great walking out the door. She said her feet felt smooth. In fact, they felt so good that she wanted to walk all the way home from downtown Anyang.

Update on the court case:

As predicted, the Hagwon-Owner-Which-Must-Not-Be-Named waited to the last minute to appeal the case, so we’re again going in for the long haul.