Bracing for the New Year

I haven’t been posting much.  Mostly because I already talk much about my week on the SeoulPodcast, so I don’t feel compelled to write it all out again.  Also, a lot of stuff I want to post is stalker fodder.  I have various crazy people tracking me.  Each time I think I’m just being paranoid, an email will pop up from a weirdo of the past.

I’m actually upbeat for 2009, even though everyone’s dreading it to be the worst year in recent memory.  As long as the won doesn’t stay weak consistently and the school stays in business, I think we’re fine for the year.  We have no investments to lose.  We have no house to depreciate.  In fact, housing prices in Korea are already starting to drop, as predicted…

December was quite nice.  I got into the Christmas spirit–constant Christmas music, homemade egg nog, the Dr. Seuss Tree.

But let’s start with the rest of November. 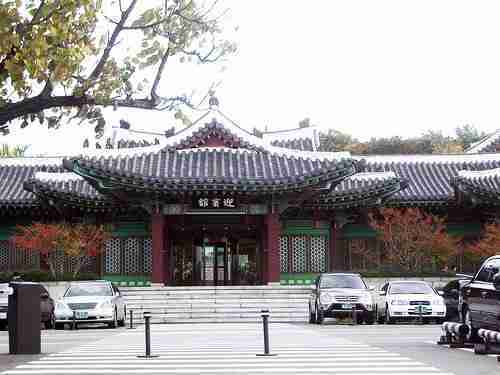 Chef Kim of Star Chef invited us to join his family at a swank buffet at the Shilla Hotel, his old workplace.  If you can afford it this is a good buffet.  There is a sashimi station–all freshly sliced.  An Italian station headed by a chef imported from Italy.  Great Chinese food.  A cool cabana-looking Southeast Asian noodle bar.  Cheese section.  Great salad bar with ingredients I didn’t know I would find in Korea.  And of course the desserts and espresso were die-worthy.  Chef Kim’s friend joined us with his wife and daughter.

No photos allowed in the dining room, but I did take some nifty photos of the chandeliers in the lobby. 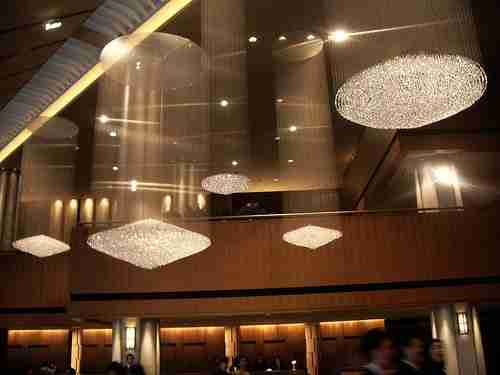 After dinner, we squeezed into an SUV and headed to Star Chef, which was closed for the evening.  We sat around, turned on some Sinatra and shared some wine with great conversations about our philosophies of Korean food.  It’s funny how my views, controversial as some have pointed out, were pretty much in line with the company that night.

Autumn hit hard, and I redesigned the Food Journal.  The SeoulPodcast has started to make some money, but not a lot.  In fact, the big advertiser is pulling back this quarter in its pay. 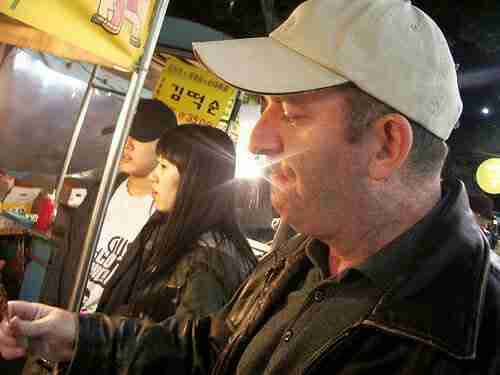 One Saturday, Jen Flinn, Roboseyo, Eun Jeong, Chef Hickey of the W Seoul, some other souls and I went on a street food crawl in downtown Seoul.  It went okay, but I think there was a little disappointment there, especially since some notable stops were not there, and we skipped out on doing a soju tent.  We mostly did the Jongno and Insa-dong areas, and really, they’re more daytime areas.  Insa-dong is pretty dead at night compared to somewhere like Myeong-dong, which also has a thriving street food scene.  Jen did do a good take on it on Fatman Seoul.

My big Christmas present from Eun Jeong came early in December.  She commissioned a shop to make a computer desk which also doubled as a music studio–my synthesizer rolls underneath the desk. Mom and Brian really went all out and gave us a Wii Fit and Guitar Hero, among some other great gifts.  DANG!  Christmas was nice and quiet.  The highlight was the Christmas party at the school the week before with all the foreigner/Korean families.  This was the second time we did it.  Chris and I tried  to find affordable turkeys but had little luck.  We opted instead for roasted chickens, pizzas and salads from Costco.  It actually turned out better.  Only the foreigners really wanted turkey.  The chicken and pizza were great.  We also had some great Christmas cookies and cakes. Eun Jeong wasn’t sick this time, and she showed up.  Chris W. dressed as Santa and handed out the gifts.  I had the best time I have had in a long time–especially around Christmas. I was getting worn down again as we got closer to the end-of-the-year break.  As predicted, I got sick on my first day of vacation.  On that day, I also finally met Stafford Lumsden in person.  We hung out in Gangnam.  I wish I could have had more energy, but I really got a full blown flu as soon as I got home.  Didn’t recover for a few days. 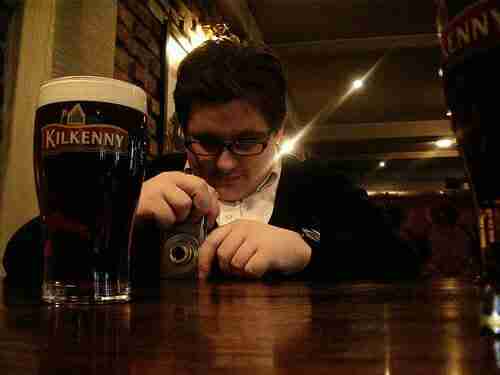 We did the live SeoulPodcast for New Year’s Eve, and it was fun.  Couldn’t believe we pulled it off.

After vacation, it was the usual annual drop off.  Classes started dwindling in attendance as the Korean school year winds down.  I have my last class free on Mondays, Wednesdays and Fridays.  I’ve been using the time to give our in-house spelling books one last thorough revision before we spend the money to get them printed in full color.  These books are really good, and I wouldn’t be surprised if other schools started buying them.  I’ve also been helping Chris run cables through the ceiling to hook up cameras and microphones in the classrooms.  This isn’t to keep an eye on us.  It’s for Joy to know what’s going on in each class without bothering us and to keep an eye on disruptive kids, of which there are few.

Seollal, Lunar New Year, was my best yet, and I spent it all by my lonesome.  Friday night, I met Robert Wicks and his friend in my old neighborhood of Ansan.  An Indian restaurant had opened there, and the owner had invited Robert to check it out.  Jen Young from the podcast also made the trek down there on a very chilly night.  She gave me a wonderful Johnny Walker Black gift set, complete with nice rocks glasses.  She also gave me the Cuban cigars and special coffee from our friend John Kim (Legend!).  The restaurant sucked, but we had a great time.

Eun Jeong was at her mother’s house for a week.  I spent the weekend munching on Reuben sandwiches.  My experiment of making my own corned beef and sauerkraut was successful.  I caught up on all those movies I had missed out on.  It snowed heavily.  I played video games.  That night was the best–smoking that cigar and enjoying that scotch.  Gorgeous!

Eun Jeong and I have our second wind now.

WE FINALLY GOT OUR MONEY!!!

The legal problems that started in June 2006 are over (we hope).  We got our money in January.  Now we’re going full steam in planning the wedding, which leads us to where we are now.

We’re doing preliminary searches of wedding venues and calculating how many people may show.

The podcast is going well, and we’re finally getting detractors–a sign that we’re getting there.