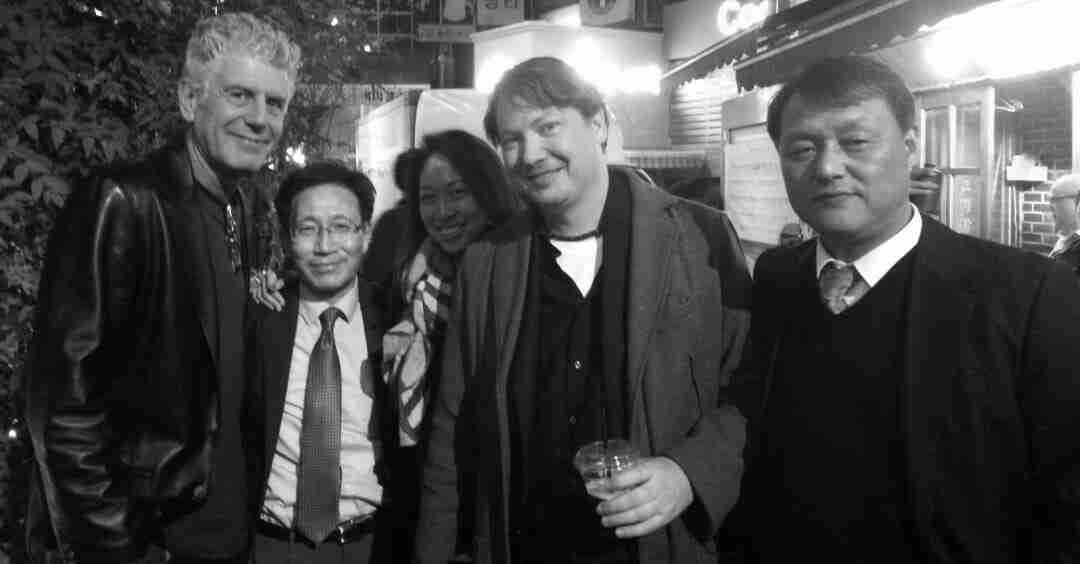 Taking a break during shooting of “Parts Unknown”

We will hear a lot of tributes from the restaurant community about Anthony Bourdain. He’s always been identified as a chef first. That’s his tribe.

There’s another tribe that has secretly claimed him since he started his travels in “A Cook’s Tour” in the early 2000s. They’re the wandering beings who find no comfort in comfort zones. The brave saps who say, “Fuck it. Let’s go.”

Bourdain was my inspiration in 2003 to leave everything and ship off to South Korea. At that time, I was finishing up a divorce. My promising career in IT crashed with the Dot-Com bust. I was doing high tech odd jobs, making websites for dentists and lesbian rugby leagues. The highlight of my week was staying home on Friday nights to watch “A Cook’s Tour” on the Food Network. This was Anthony’s first show, less than 30 minutes. It was his rawest and most virgin. The world was still new to him. Vietnam was this fresh vibrant stimulant. He was rough himself, not as introspective as in his later years. I loved it because it was the first food or travel show that bleeped its host.

I myself had lived a year in Germany before college. I had regretted returning after just a year. Once one lives overseas, it’s hard to move back to the suburban life you knew. The people around you don’t understand what you’ve seen or experienced. They don’t know how large the world is and how small their worlds are. It’s like getting a taste of the most amazing succulent, spice-filled exotic dish and then returning to a life of unsalted mashed potatoes–surrounded by others who think unsalted mashed potatoes are just fine and dandy.

Watching Bourdain passionately break into a durian, munch on crispy frog skins in Chiang Mai, and kick around an inflated pigs bladder in Spain while the rest of the porcine fellow was being divided and cooked–it woke me back up. I had to get out of my mashed potatoes existence. I had to do THAT.

I was thinking of returning to Europe, but Korea had been calling at me. I had studied Korean history in college, and I was really into Korean culture. But I was still not sure about moving my ass to Asia. It was that push from Bourdain’s show and his book Kitchen Confidential that made me say, “Fuck it. Let’s go.”

It’s been stimulating. If you’ve never been to a place that takes you completely out of your comfort zone–or rather, you never let yourself surrender to uncertainty–you’re still asleep. Your synapses atrophy. For me, moving to Asia was like being groggy and then suddenly dunking into a bathtub of ice water.

There were some dark times. The first three months are a great honeymoon when living in a different part of the world. Then disillusion creeps in. The day-to-day headaches of simple tasks wear you down. You feel like a helpless toddler just trying to get groceries and pay bills. Washing machine translations don’t appear in travel phrasebooks.

it was times like these I’d watch my pirated copies of “A Cook’s Tour.” This was back in 2004. It was difficult to find those episodes, and the quality was low by today’s standards. But I needed it. WE needed it. I burned the videos onto VCDs, which were CDs that held video data. Back then, DVD burners weren’t cheap and plentiful. A friend had a loft apartment with a DVD player, and us foreigners and Korean friends would watch Tony Bourdain eat cobra heart, suck on roasted lamb in the Sahara, and dine with Geishas. One of the episodes was titled, “Let’s Get Lost.”

THIS was why we came out here.

If it wasn’t from those old episodes, we wouldn’t have gotten lost and tried everything we did. They were healing to the weary far from home.

There was a part of Bourdain I gathered wanted to take it a step further, like we did. To actually live away from the comfort zone. I wish he could have become one of us.

I got to meet him when I worked as a consultant on “Parts Unknown” in October 2014. It was an intense time. It was surreal meeting this man who shifted the winds of my life. Anthony was to me what Joey Ramone was to him. But I was just some schmo scrambling to keep his show from falling into disaster in Seoul. I had a chance to tell him about him changing my life and about the VCD parties in the early days. When that all came out of my mouth, I felt just as awkward as he looked. I mean, how does one respond to that?

I’d almost say he defined my life from 2003 until then.

When the news of his passing was announced, I was in a meeting in Hongdae. My phone was buzzing like nuts, and people were texting me about it. They were tagging me in Facebook posts. I don’t know if it’s because they associated me with my obsession of him. Or was it because I’d posted something a little dark about my own state a few months ago?

I myself am numb. I’ve had a few friends die in just this past month and one attempted suicide. I’ll process this some other time.

I’ll tell you something freaky, though. I was already in a bummed state, listening to the new Dave Itzkoff biography of Robin Williams

. I was on my way to that meeting today when it got to the lead up and Williams’ actual suicide. During that, for some reason, my thoughts turned to Anthony Bourdain. I hadn’t heard the news yet, but I was already in a state of melancholy.

I don’t want to speculate. Maybe one day I’ll be interested in answers. But now I’m just registering that there’s a second bookend placed on this man’s life.

I’m going to go offline for a bit. No news or social media. I need to shut out for a bit. Hold my daughter. Play with her.