A Whole Season of Lazy 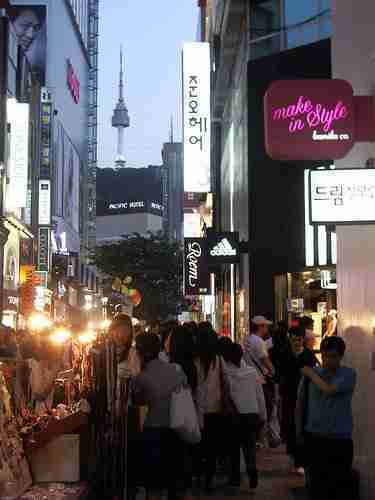 Yeah, I’d say this is the longest I’ve gone without posting. I guess I’ll return to doing small regular updates like I used to.

Of course, since returning from the States in March, I started up the SeoulPodcast, and that’s taken a lot of time out of my week. I also talk about stuff that’s happened on the show, so I don’t feel so much incentive to type the same stories I talked about on the air.

We’ve officially won the case against the School-Which-Must-Not-Be-Named. They ruled a little over six million won minus around 1.5 million for my libel offense. Man, that was a $1,500 mistake. I’ll try to keep my big mouth shut next time.

So, unless the Owner-Who-Must-Not-Be-Named appeals, which would cost her way much more money than she owes me, we’ll just go ahead and apply to get the money owed us that the court was holding from the asset freezing last year. It’s officially taken two years to get this verdict.

I’m in the process of renewing my visa under the new regulations. Involves the criminal check and freakin’ apostille. Getting my fingerprints taken for the criminal check was a bit of a headache–finding a police station with a stamp pad to do it. Mom and family are helping out with the rest.

I’ll get my results from my “dirty foreigner medical check” tomorrow. I found it amusing that one of the questions on the questionnaire went something like, “How much do you drink a day (based on bottles of soju)?”

So, now that the two-year headache with the School-Which-Must-Not-Be-Named is basically seeing its end, a new one just had to pop up. We had been saving money and did some last minute scrounging. Also got a great boost from Mom at the last minute. But we got the money we needed to keep our apartment. Naturally, I was skeptical that everything was all settled, and I was right.

Almost a month after we got everything together and agreed to stay here, a relative of the owners claims we’re not paying enough, and she wants to up the price by 10 million won–which we won’t be able to get by the end of July, the deadline. Now, if we wait it out, and they can’t find a buyer, we’ll be able to stay here. But if they do find a buyer, we basically get a month’s notice to find another place and move out.

This would already be stressful by itself. But since we thought that this situation was over, Eun Jeong went ahead and got back into the job market. She starts her new job next week and won’t have time to find a new place if the worst case scenario occurs. The owners themselves are elderly, poor and continuously tell us that they are uneducated and don’t know what to do. 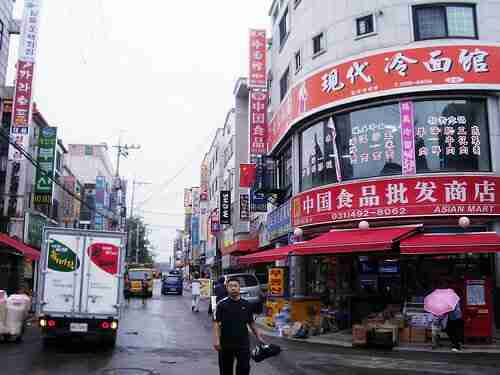 Yesterday, we went on a research trip for an article I’m writing about unique markets in the area. It was drizzling, but we ventured to my old town of Ansan. What I didn’t know back then and wish I did was that there’s a whole neighborhood in southern Ansan (Ansan Station, really) full of southeast Asian, Indian, Pakistani, Russian and other immigrant markets. I had a blast down there. We were also instensely stared at, more than usual.

Nonetheless, I have found a place where I can get my lamb, spices and hard-to-find items, which is a lot more convenient than Itaewon. I found fresh green beans for the first time in Korea. I also got a bag of dried garbanzo beans, from which I made hummus tonight. 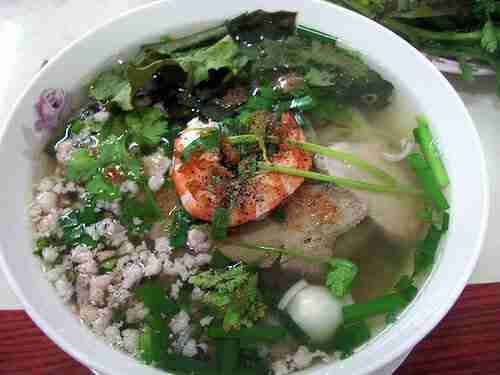 We ate at an authentic Vietnamese restaurant–well, authentic in the sense that it’s not a Koreanized franchise. The pho tasted starkly different. Eun Jeong was so surprised by the flavor that it hit her gag reflex. We exchanged bowls. The one she had ordered was spicy and full of intense oils, herbs and spices. At the Korean chains, you have to specially ask for cilantro. At this one, they were unapologetic. Cilantro was in all the dishes we ordered, heavily. We also shared a can of coconut juice and a durian shake. 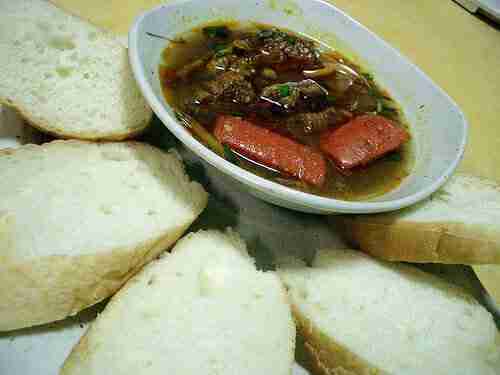 I ordered what I thought was a Banh Mi to go. You know, those famous Vietnamese sandwiches. Instead, we got a bowl of beef soup with baguette slices on the side. So remember, “Banh Mi Bo Kho” is soup with bread. 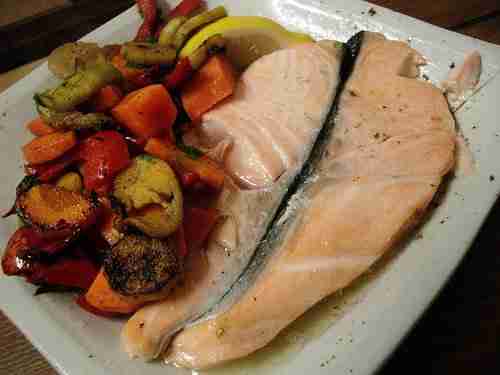 I’ve gotten back into working out on a regular basis. I’ve gotten a book to finally give me to some real guidance on a decent weightlifting routine. I’ve also stuck well to some diet changes. I make sure I eat breakfast when I wake up, something I used to skip. I majorly cut back on my portions. Bananas and nuts replace my candy bars and pastries for afternoon snacks. And–the big thing–I’ve really gotten into cooking fish. It’s because I’ve started cooking it in a way that makes it taste good to me. It’s so simple. Just rub the fillets in a little butter, salt and pepper, broil them and drizzle lemon on top. Sounds dull and bland, but the fish taste like sweet popcorn. I’ve also made a few stuffed flounders. This may become a regular thing when Eun Jeong starts work, and I’ll have to fend for myself for dinner each night. Broiled fish is a quick and easy dinner to throw together.

Other things going on…

I’ve been interviewed twice this past month for publications. One for Korea AgraFoods, which is a trade journal put out by the government. Also, last week, my friend Kwang-lib met with me to interview for a book and a JoongAng Daily piece he’s working on. He interviewed me last year when the libel thing was blowing up. It was nice seeing him again.