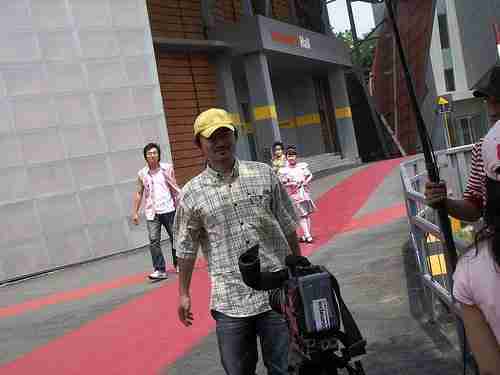 Pictures to go with the previous post. This is our director. He’s generally good natured, and I like him a lot. I really like our crew. They are under high stress. They are even more underpaid than we are. And they still keep the spirits up on the set. 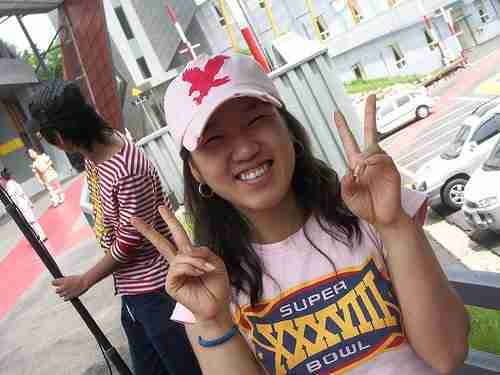 Our make up girl, Eun Yeong, always tries to make me laugh–mostly by telling me to shut up and speak Korean.

This bit was on the campus of the Incheon English Village. We shot a scene where one of the kids was running away from the doctor’s office while the other one was trying to catch her. 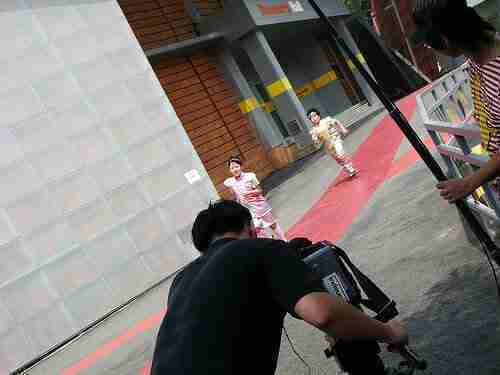 The chaser then fell down and scraped his knee (Eun Yeong’s make up effects). 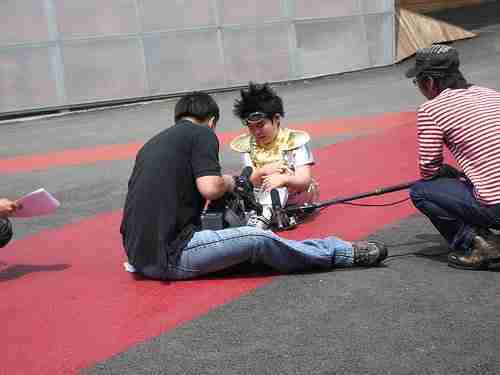 Josh did his own stunts.

I really enjoyed the shoot that day. I got to play a doctor, and I got to play piano. And the food at the English Village ain’t that bad for cafeteria food. I’ve also met a new friend, Cork, who seems like an interesting and entertaining guy. Cork showed up at our taping to return a library card I left behind on the last shoot.

It was the prop library card for our library segment. That was pretty funny.

We had a holiday this week, Memorial Day. Eun Jeong went out with her co-workers and invited me along. We had a good time. We rarely go out like that these days. And man, we both feel like we’re getting old. We can’t do those all-nighters like we used to. 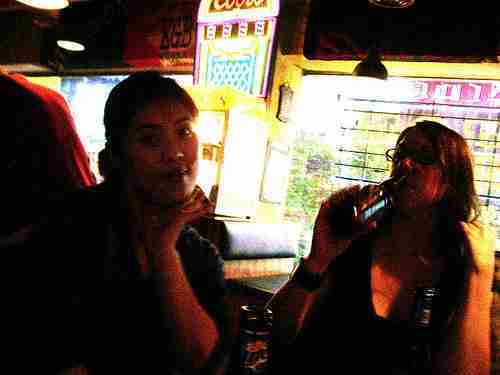 We started off at Atlanta (the bar), where we watched music videos and ate free popcorn. We then introduced the Irish teacher to the noraebang experience. She loved it. The night concluded at the Japanese-themed WaraWara bar. Eun Jeong talked to a lot of people and got to be herself and have a good time while not being afraid to be around English speakers. I really like her co-workers, too. I haven’t mentioned their names not because I’m afraid of more libel action. I just have no idea how to spell them. 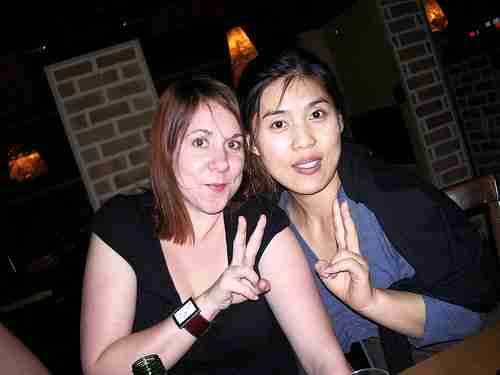 I’ve been busy proofreading the scripts for this weekend’s shoot. I am also writing a piece on the Korean yogurt craze starting up in America, primarily in Los Angeles. Red Mango, a Korean frozen yogurt shop, is opening its first stores in America this year. They were popping up all over Korea a few years ago. I went out Monday night to get a first hand account of a store and get some photos when — couldn’t find one. Who knows? Maybe the craze is dying on these shores. They used to be all over the place. Eun Jeong searched their web site and said she could only find one close by near Anyang Station.

So, I’ve pretty much written the piece minus the first hand account. The deadline’s Sunday, but I want to get it in and revised as early as I can.

I enjoy these writing assignments. I wish I did way back in school. These days I can type out 800 words without thinking about it. I’m not nearly as verbose as our friend Michael, the Metropolitician. Yet I find it easier to sit down and write, write, write, now that I practice it a lot.

I finally watched the Korean monster movie, “The Host.” I was particularly interested because Mr. Metropolitician had done the English subtitles for the picture and was in the credits (with his name misspelled).

Honestly, I really liked the beginning of the film but felt cheated at the end. There was some good satire in there, like the futility of disguising people’s voices on most every news show, the frequent bribing of public officials, the only mourning scene that made me laugh, the references to the demonstrations of the 1980s and 1990s, and the mafia guys who itemized every job they did (including hazard pay) on a written bill. Like I said, the first act started strongly. Then it got confusing as it wore on–and a bit tedious.

On the blog front, I have restored the postings about Unnamed Hagwon, which I had taken down because of the libel investigation. I have since changed the names to “Unnamed Hagwon” and “Unnamed Hagwon Owner.”

Speaking of which, a story about my case will be published in the Joongang Daily on Monday. I got word of it this morning from the reporter. He said he had also talked to Unnamed Hagwon Owner, and he then hesitated and let out a breath. “I’ve never met anyone like her.”

I don’t think he meant that in adoration.

I expect more events to happen now, especially after Monday. Don’t know if these events will be good or bad. Preparing for bad, as I always do.

Resorted to writing sentences without subjects.

Brant and Terra sound like they’re doing fine. I haven’t seen them in over a month now. I bet she’s really showing. I also get some text messages from Injoo wanting to meet up. I can’t wait to have the free time to see him. He said that RPM, the bar that replaced the jokingly infamous Bon Jovi, has closed its doors. I do want to take a trip back down to Ansan, my first home in Korea, to see what has changed. I sound like it’s a big trip. It’s really twenty minutes on the subway.

But hey, I remember there was a Red Mango down there.