Now that we’ve had time to breathe and break our new year’s resolutions before Lunar New Year, also known as “Second Chance New Year,” let’s do an update on what food trends are going on in Korea. Of course, this is all unscientific, as all of these types of articles are. Yet, all of these examples I have seen out in the wild in more than one place, and have seriously noted where others are dying out. Let’s start with the catty snitty part.

Garosu-gil – This was one of the shortest lived trends. When government organizations are touting it, you know it’s dead. As soon as Garosu-gil started hitting the food blogs as this cool Greenwich-Village-like (back when it was cool) food ‘hood, the rents shot up, and the franchises muscled in. Now it’s a street of Caffe Benes and wanna-be Caffe Benes. There are a few interesting restaurants, like Pier 17. But Garosu-gil is just a bland street for fools with more money than taste.

Brunch – This monster has lived a nice hearty life. Die already! I don’t want brunch. I want a place that serves BREAKFAST.

Coffee Shop Saturation – Articles have been written already on the over-saturation of the coffee market. Yeah, Starbucks plans to even more aggressively expand in Korea. And the homegrown shops are getting ready to escalate the turf war. But we’re still going to see a decline in coffee shops. Unfortunately, it’ll be the independent ones that go first. Yes, I’ve heard that a lot of naive people went into the coffee business because they thought it would be fun, easy, and profitable rather than because of a passion for the java. Then again, the CEOs of many of the big homegrown chains don’t even like coffee. Think about that the next time you sit down to your caramel macchiato and ice cream waffle.

Kebabs – So sad. Some drama happened with the ownership of Sultan Kebab. It contracted. Other new kebab shops couldn’t expand either. Lotte and other department stores co-opted the lovely kebab into cabbage and honey mustard candy wraps. Now it’s back to how it was in 2006, where the only place to get a decent kebab is in Itaewon. And I fear the shops on the main strip may even die out. Pushing the kebab back to the alleys and late night food carts.

Moscato – Eh, may be wishful thinking. There’s a hypothesis that cultures adopting flavors from other cultures tend to lean towards the sweet side at first and then mature to the savory and drier side. Korea has done this to the extreme, as it does many things, with sugared garlic bread, candy coffee drinks, sweet potato pizza, honey mustard drenched “fusion” food, strawberry and whipped cream sandwiches, I even had a woman recently pour two tablespoons of granulated sugar on the ham, egg, and cheese toast I ordered. In supermarket wine sections, the largest part is the one labeled “Sweet Wines.” I’ve noticed that shrink a bit. Again–may be wishful thinking.

High Price-Low Value – A tongue-in-cheek rule in Korean marketing is to just slap a higher price tag on it, and consumers unquestioningly think it’s better. But with the still sluggish recovery, high household debt, falling housing prices, , combined with more maturity in taste, consumers will look for more value in the foods and drinks they buy. 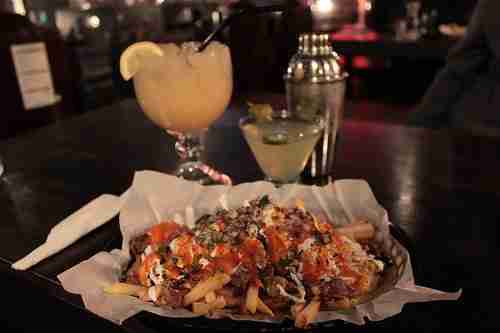 Mexican and Ko-Mexican – Vatos Urban Tacos started it in late 2011, and this has seriously exploded. Now Taco Bell Korea is doing bulgogi-stuffed tacos, and they’re the only Taco Bell in the world currently doing it. Tex-Mex has gotten more mainstream after fits and starts. It’s Koreanized Tex-Mex, but that’s not a totally bad thing. It just means less beans and cilantro and more orange cheese.

Pop-up Restaurants – We saw the beginning of pop-ups last year. We, in fact, were one of the pioneers. Then people like Linus’ Bama Style BBQ and Southern Sons cocktails started making this a regular thing. Pop ups are also where to meet all types of people. I’ve run into people I hadn’t seen in a long time or would never have run into in other situations. And with Vatos lending out their old restaurant space to pop-ups and other cafes and restaurants figuring out that it helps promote their businesses, this trend will be around for a while.

Hapjeong – I tell people that Hongdae is divided into two parts. There’s the college kid party northside, and there’s the more sophisticated adult southside. This latter part is nestled between Sangsu and Hapjeong Stations. Where the northside is all about clubs and fluorescent cocktails in bags, the southside is about wine bars (good wine bars) and large shelves of rare single malt Scotch. It’s also where riskier and kookier themed restaurants are sprouting. Think of Castle Praha being the start of this. Then branch out to the tropical Bonjour Hawaii and 360α with its community wading pool. Hapjeong is where the innovation is happening.

Itaewon – Well, Itaewon has always been the in place for foreigners. Now with the growth of Restaurant Alley behind the Hamilton Hotel and the demolition of buildings to lengthen it, it’s become popular with Koreans. So technically, it’s a revived trendy place. Not sure if this is such a good thing. Already the new spaces created from the street lengthening have become populated with faux French restaurants, overpriced (::sigh::) brunch cafes, and “English” pubs serving nachos. I’m afraid that Itaewon is going to become even more infested by franchises, turning it into another Garosu-gil. It used to be the place where foreign franchises, like Taco Bell, tested the waters. But we’re already seeing Hollys Coffee and other local franchises we already see everywhere else in Seoul muscle into the last place where authentic foreign restaurants could thrive. Well, there’s always Ansan.

Craft Beers – Thanks to laws finally giving craft brewers a fighting chance, we are going to see a serious rise in the quality of beer in Korea. Last year was the summer of imports. And Koreans, having tasted how good real good beer can be, have realized how crappy the domestic stuff is. I mean, it’s worse than Budweiser. When The Economist came out with the anti-Korean-beer article heard ’round the Korean internet, the locals didn’t do the usual circling of the wagons. They actually agreed with the foreign barbarian journalist about the state of Korean beer and demanded changes. With talks of Lotte entering the market in a couple of years, turning the beer duopoly into a triopoly, and with 7Brau actually getting its products into supermarkets, including the first IPA to hit Korean supermarket shelves, the fat lazy chaebols are going to have to deal with something they haven’t dealt with since forever–competition.

Cocktails – I was thinking cocktails would start getting big in 2011. I was a bit premature. Now we’re starting to see them in full force. Where young Koreans were competitively training to be sharp precise baristas, they’re starting to go into mixology. Yes, we still have 1980s-style bottle juggling. But those clowns are starting to return to the circuses where they belong to make way for some serious cocktailians with a unique Asian touch.

Single Malts – Was “On the Radar,” but after talking to Wine Korea’s Joshua Hall, he’s convinced me that they’re hot. The taste for whisky is getting more refined–or more ostentatiously expensive. We need to start a consciousness campaign at room salons teaching that every time a shot of soju is mixed with a single malt, God kills a puppy.

Pizza Renaissance – Remember when the only burgers were from fast food chains? And then Kraze Burger came and people thought that was good? That wasn’t so long ago. Then there was the burger renaissance in 2010. Serious burger restaurants like Burger B showed the public what a really great burger could be. Now you can find a decent burger most anywhere. And Kraze has felt the crunch so much that they did an emergency makeover (jury’s still out on that, as it still feels like a cold clinical museum of a diner). Now we’re in the middle of this happening with pizza. Pizzeria d’Buzza made it chic. The Pizza Peel gave a good ole neighborhood brick oven pizza joint feel. Hollywood Grill and Blacksmith’s (the one in Anguk, not the shitty chain owned by Caffe Bene) became famous for their quality pies. Al Matto impressed with seriously crispy crust and fresh diverse toppings. And Brick Oven New York imported real New York pizza to Gangnam. Within a couple of years, we’ll be saying the same thing about pizza. “Remember when all you could get was doughy pizzas with sweet potato and corn?”

Better fine dining and chef-owned restaurants – This is more based on hope. But I have seen Korean fine dining, as in fine dining restaurants serving Korean (or Korean-inspired) food, improve in quality and service. East Village comes to mind. Pierre Gagnaire a Seoul was in the Miele Guide’s top ten best restaurants in Asia, a first for any restaurant in Korea. Bistro Seoul sort of–nah, it’s more of the pretentious old school (see High Price-Low Value). But other places serving (I can’t believe I’m writing about this positively) Korean tapas are showing more playful and flavorful modern approaches. Then there’s Bean Table, which isn’t necessarily fine dining but is a gourmand destination. Yes, there will still be the Woo Lae Ok overpriced places that think charging $150 for a bottle of Yellowtail Merlot and serving highly marbled but flavorless (especially when burned to well-done on a grill) grain-fed beef is high class. But modern Korean fine dining is coming into its own. It’s only going to get better.

The Itaewon Outskirts – With the franchise bullies taking over Itaewon, Hannam-dong, Haebangchon, and Gyeongidan are becoming the places to try out new international restaurants in  foreign food friendly environments. The HBC has been the haven for this for a while. Gyeongidan and Hannam-dong are getting more of a surge.

Lamb Shanks – I’ve already heard of two restaurants putting this on their menus. And one of them can’t keep them in stock.

Sandwich Renaissance – On the heels of the pizza renaissance, we may start seeing better sandwiches. Some small places are curing their own meats. I think that once someone gets successful curing hams, corning beef, and–hey, where’s that fabled Andong Prosciutto–running a serious deli will be much easier.

Southern/Cajun – Shy Bana was a frustrating failure, even though some people tell me that another location is pretty good. The Boiling Crab in Itaewon has done well. And Pier 17 serves po’ boys, Oysters Rockefeller, and has the first appearance of crawfish I’ve ever seen in Korea. Also, I think jambalaya (the word and the dish) will be on more Korean tongues.

Pre-smoked and pre-grilled foods – Bacon is making more headway. Smoked duck is now everywhere. This weekend, I picked up some vacuum packed charcoal grilled fish at the supermarket. Let’s hope that real Virginia ham is in the near future.

Le’ts see if I’m right on these predictions. No, I’m always right. If you think I’m wrong, you just didn’t hear me correctly. Talk about any trends you’ve noticed, coming or going, in the comments.