A Clash of Media Cultures

“Getting it right is doing it the right way—global standards, not local short cuts.”

Marketing expert Les Edwards gave a presentation in 2010 that highlighted the main differences between Korean marketing and American marketing. Americans abide by the three S’s: simple, surprising, smile. The focus of the message should be simple and limited to a single idea. An ad campaign should be surprising, original, or as Apple’s slogan used to say, “Think different.”

An ad campaign should also make the consumer smile, whether it’s through humor or through beautiful visuals. It should create a good feeling so that the consumer will associate warm feelings with the product.

The cult of celebrity 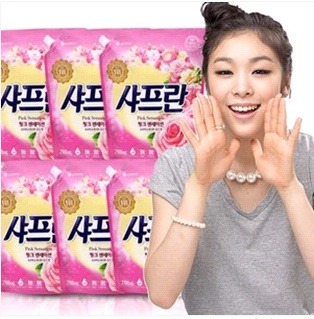 Edwards stated that seventy percent of advertising in Korea is based on celebrity. Just look at any chicken franchise, and there’s a gag man or K-pop group as its face. Soon after her amazing performance in the 2010 Vancouver Winter Olympics, Yuna Kim appeared in no less than forty TV ads. Yuna was the star of the moment, but having her face endorse so many products diluted her brand and the brands she advertised. It no longer became “special” for Yuna to have her face on a product. She was also brought on board the committee to globalize Korean food, though people don’t normally think of skinny figure skaters as the best spokespeople for food. Edwards speculates that the reason these celebrities are used for endorsements doesn’t have much to deal with marketing strategy. It has to deal with corporate executives wanting to have the aura of that celebrity around them. They just want to be personally associated with the popular flavor of the day.

Unfortunately, the people who are very famous in Korea likely are not so famous in America. Kim Yuna is known amongst people who follow figure skating and Olympic sports. Yet the average American would not know her. The same is true for Rain and Bae Young-joon. They are popular in Korea and in east Asia, but they are not well known in the west.  Yet I have seen all three of these celebrities being used in promoting Korea and Korean food to the west. If people don’t know who the celebrity is how useful is a celebrity endorsement? 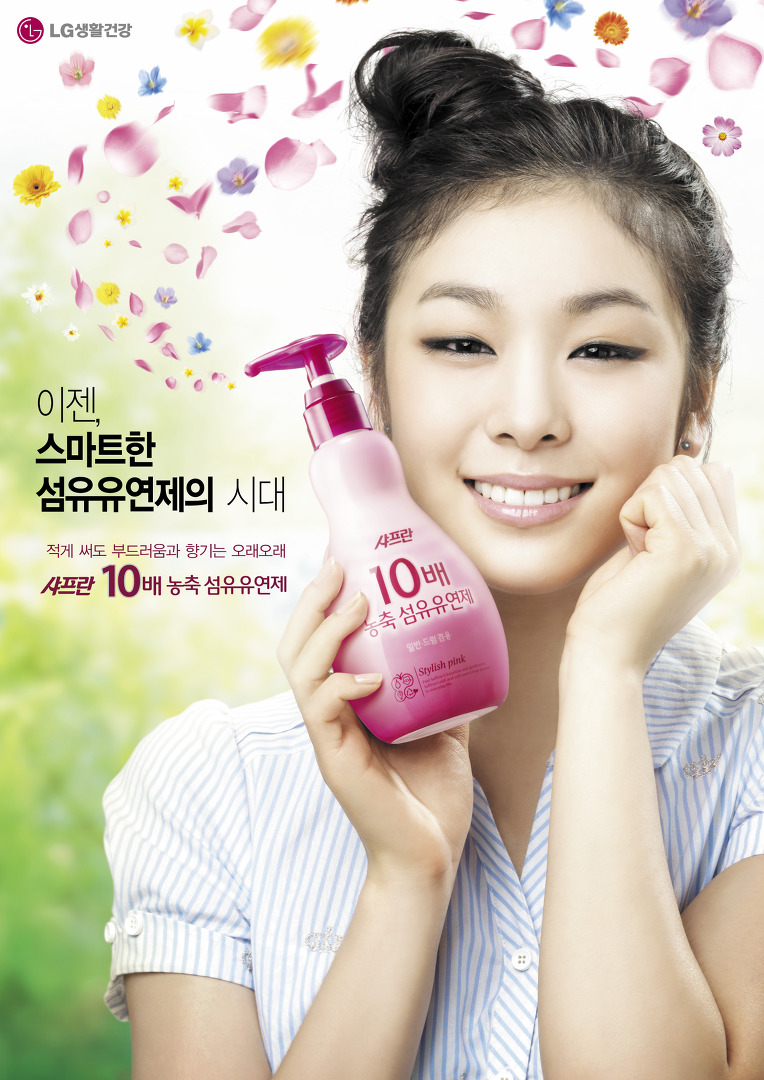 The real problem is that celebrity endorsement is the least effective form of advertising. Edwards calls it one of Korea’s “biggest weaknesses in marketing communications.” Study after study shows that it doesn’t work well. Endorsement has only been effective when the endorser has authority. A figure skater promoting a brand of ice skates is effective. A figure skater promoting cell phones, beer, and laundry detergent misses the mark. The optimal role for a celebrity endorsement is to make the product stand out from the crowd. If the celebrity is not well known, if the celebrity adds no authority to a product, if the celebrity is already on thirty-nine other ads the marketers are just wasting money. Using celebrities doesn’t build lasting value. It doesn’t create personality. People don’t connect with the brand. They only connect with the celebrity. When the celebrity’s star fades, so does the value of the product. Or even worse, when a celebrity gets in trouble, it hurts the brand as well.

The other two B’s, beasts and babies, describe the dependence on cute animals and babies in place of celebrities. All three of the B’s may work, but they work inefficiently. And you have to admit that they are not original. Throwing a pretty face on a product is creative laziness.

Korean marketers and PR professionals have a disconnect in the credibility department. Too many times their promotions get dismissed as propaganda. That’s because they blatantly look like propaganda. This has been an ongoing problem Korean promoters have had for years. Seoul-based marketing consultant Tom Coyner refers to “message credibility” versus “message control.”

The tendency has been for the government and large corporate entities to try to control their message. The obsession with control has made them myopic to the consequences of doing so. Samsung’s libel suit against columnist Michael Breen for a silly satirical column caused them great international PR damage. Government agencies’ herding of international journalists to special areas and attempts to dictate what they write has resulted in negative press from those very same journalists. And media such as the Arirang network is instantly dismissed as government pabulum that can’t be trusted as a reliable source of information.

In full disclosure, I have worked for Arirang because I want to promote Korea myself. My comments here may prevent me from ever appearing on Arirang again. Yet there are institutional issues with Arirang and its ilk that prevent them from being effective. The producers and writers for many of the programs mostly have little overseas experience and write from a “frog in the well” perspective. Foreigners (the people who actually come from these markets) may appear on camera, but they have little influence on the actual content. And even though the network is broadcast in English around the world, the average Arirang production is run by people who can’t speak English—relying on English-speaking interns instead. As a result, programs come across as just boasting about Korea’s greatness with condescension towards their audience. When was the last time boasting and condescension won you over?

It’s partly because these campaigns are run by people without international perspectives that they go out reeking like clumsy propaganda. The other part is the top-down way that campaigns come about. An executive in his high-backed chair has an idea, and everyone just says, “Yes,” to him. No one questions him or tries to improve upon the idea. There’s little creative teamwork. There’s little market testing. There’s little work in making a message subtle enough to not feel like the consumer is being punched in the face by propaganda. 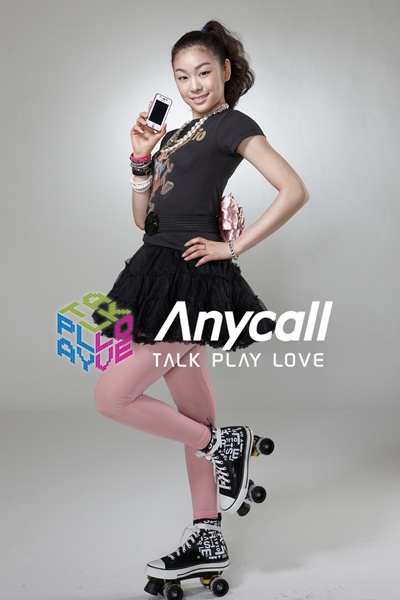 The media works differently overseas than in Korea. If you bring a reporter over and wine and dine him he is not obligated to write a positive article. He is not obligated to write an article at all. To do so is considered unethical. That doesn’t mean that you shouldn’t bring in reporters. Just don’t expect to have the control over the articles they write. And if you try to exert control over their writing, they will resist and will likely write a negative piece. Just be polite and professional. Journalists respect professionalism.

In the end, marketers need to realize that they will have to give up some control over their message. The best marketing campaigns are organic. They are started through seeds of genius and grow on their own. Marketers can give guidance, but too much control chokes the campaign. This control can take the form of threatening those who criticize, keeping information from crucial sources, or just preventing other outside voices from lending their help. 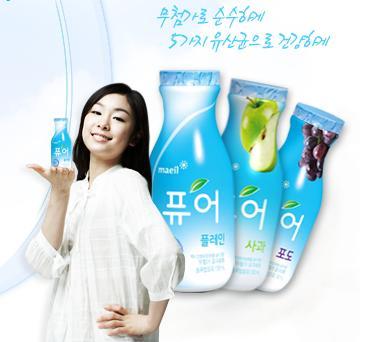 Partially related to the over control of the message is the lack of subtlety. Overseas advertising for Korean food has been loud, obvious, and not very clever. A good example is a full-page ad taken out in The New York Times that advertised bibimbap. It started out well, with a large gorgeous picture of bibimbap. The rest of it consisted a boring academic description of the dish that related it to funerals. It was a clumsy message that hit people over the head with a sledgehammer. It was like a salesman on the subway smacking everyone in the face and saying, “Buy this!”

The best ads don’t look like ads. Consumers are smart. They know when they are being sold to. If they feel like you are making a sales pitch, they tune you out. That’s when you have to be subtle and clever. You don’t start a marketing campaign and call it a marketing campaign in your ads. Don’t tell people that you are selling something to them. Find other ways to market the product. Stories. Humor. Art.

As stated, the biggest weakness in Korean marketing is originality. Think about the types of people who tend to be creative. They’re usually the misfits in society, especially in corporate culture. Creative decisions in Korea tend to be given to CEOs or people trying to impress their CEOs. The creative professionals are cut out of the decision making process. And marketers should be trying to impress the consumer, not the boss.

Trust the creative people to be creative. I have seen great ideas from creative types get stifled by their non-creative superiors. Korea has always been strong in the sciences, but the culture that creates this strength also stifles creativity, which makes Korea weak in fields that require originality, like web design and software design.

There’s a famous story of the Samsung bosses laughing the creators of the smart phone operating system Android out of the meeting room. They felt that a small start up of creative professionals could not match their own large software department. Their blind spot was that their large software department was shackled in a corporate culture that discouraged creative innovation. At the end of the story, Google bought Android and made it the most successful smart phone operating system in the world. Samsung itself ended up ditching their own Bada platform in place of Android in their smart phone line—the very same operating system they rejected with laughter. 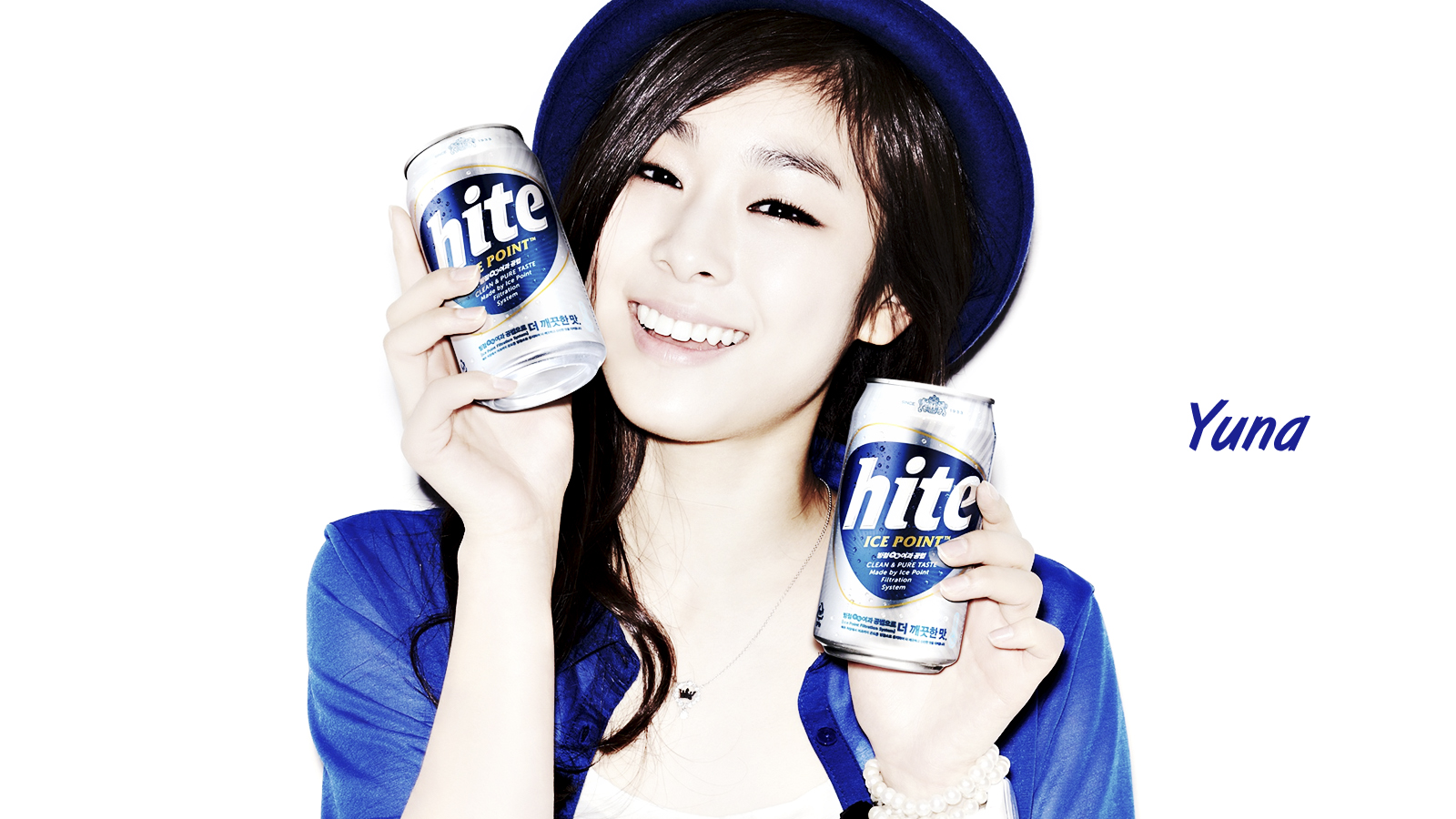 An environment must be set up to foster creativity and not depend on the three B’s. Not every idea will work, but some will become greatly effective. Effective marketing is efficient marketing. Sticking to the old ways will just spawn bland forgettable campaigns, thus wasting money and energy. Resist the temptation to load your campaign with celebrities, especially if they’re unknown outside Korea. Make your message credible without stinking like propaganda, and remember to be subtle.  An expensive marketing campaign should not be run like a subway salesman.

NOTE: Scroll down to the bottom. 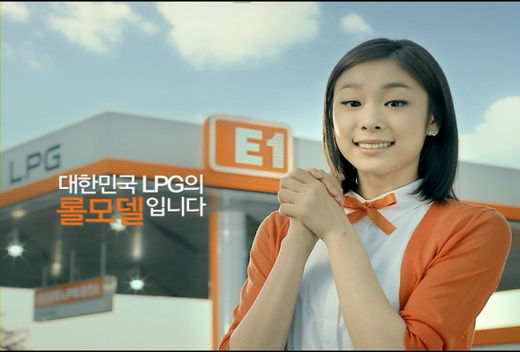 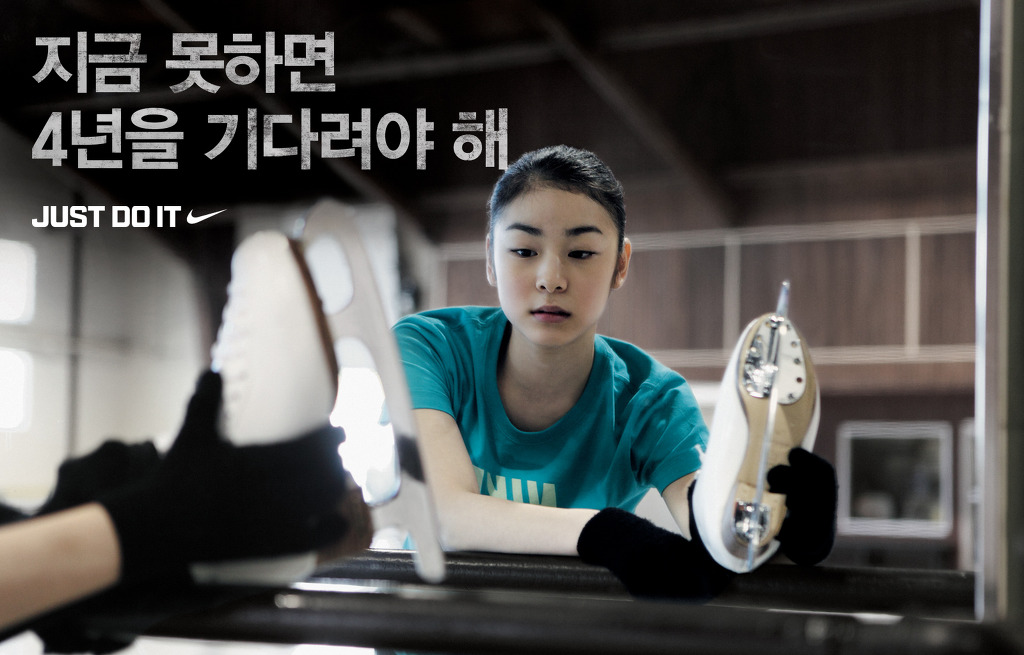 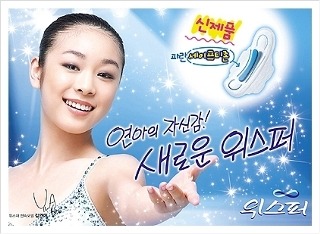 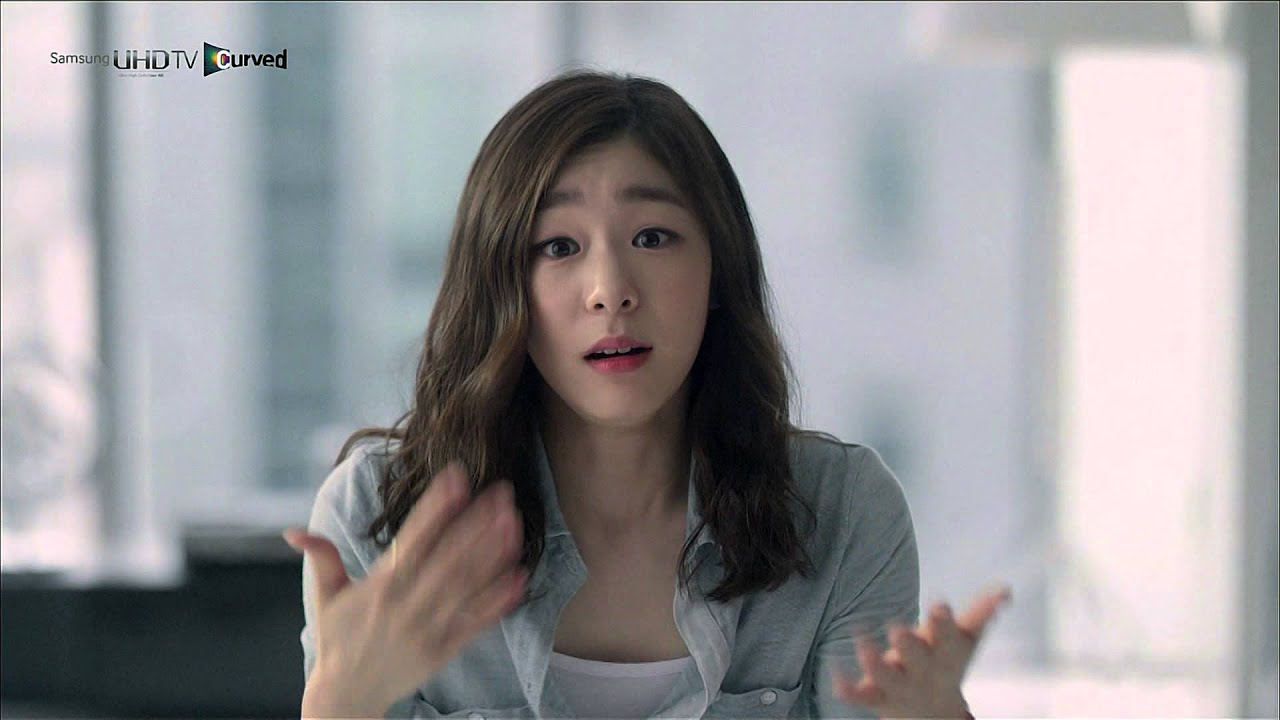 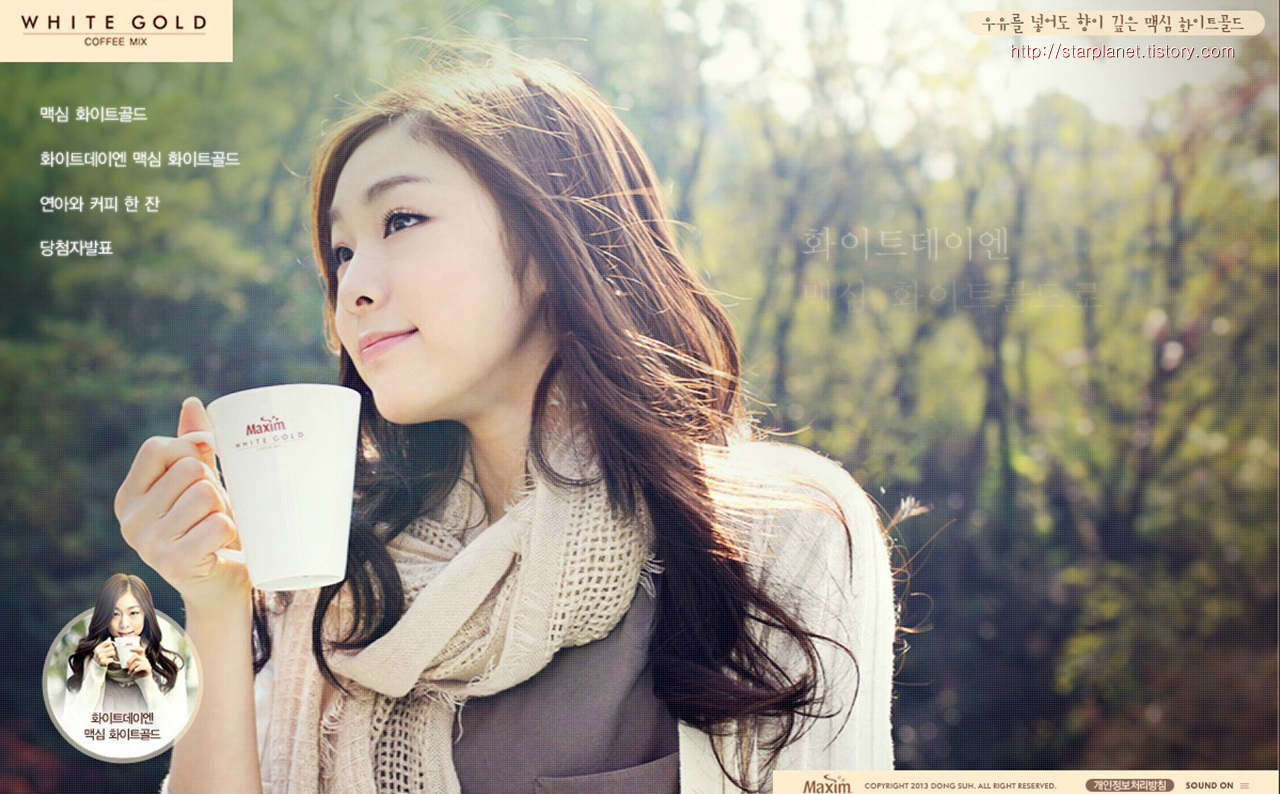 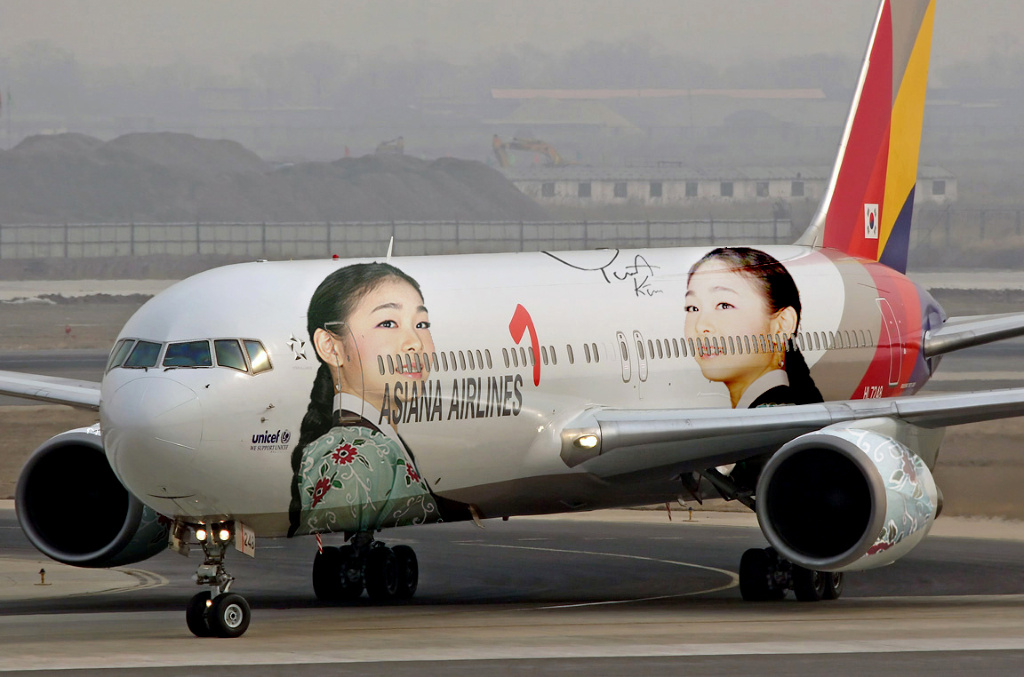 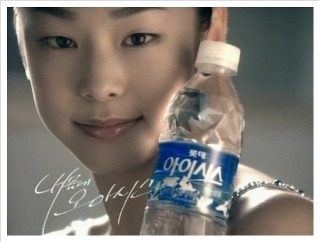 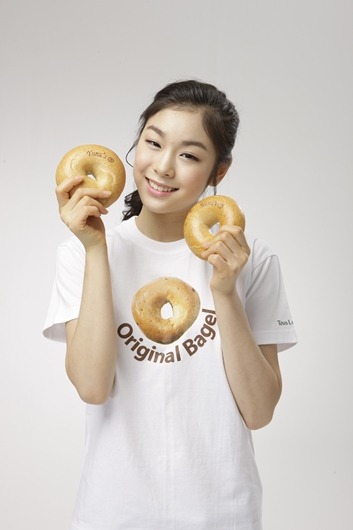 Now that you have scrolled down here to the bottom…

There are 19 Yuna Kim ads in this post. Can you remember at least three products she was advertising?

Yeah, I thought so.