Let’s get the obligatory prefacing out of the way.

I know there’s a cadre of people who say I shouldn’t say anything negative on this blog, especially if it’s about Korean cuisine. They say I’m condescending. They say I don’t know what I’m talking about. They say that despite living in Korea with my Korean wife and Korean child for almost nine years writing about the cuisine that I, as a foreigner (or as one person put it, “cock-casian”), am not allowed to make any comments on Korean cuisine.

It’s amusing to contrast that with the other camp that calls me a Korean apologist. So I must be doing something right.

The reason I do this is that I want Korean cuisine to succeed. My big fear is that all of this hype and money is going to fall flat on its face. And all my efforts to do what I can to promote a cuisine I dearly love will be no more than a shaken Etch-a-Sketch.

Let me start with this. 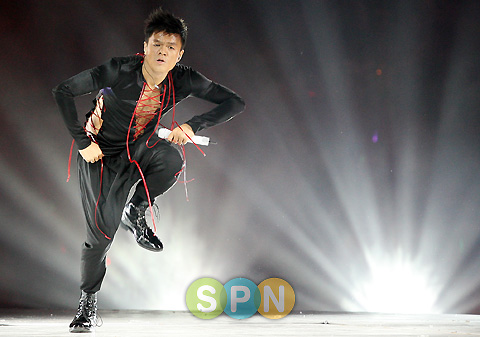 JYP–Get the fuck out of the restaurant business.*

I had been getting hints here and there of JYP’s Kristabelli before it opened. Every article I read about it seemed to be regurgitated press releases about the high tech grills. I couldn’t find much about the food.

And there was good reason for that.

After it opened, I heard personally from people who went there that it was a disaster. The high heat grill system they had put in place was a pure gimmick and destroyed the meats–some of the highest prices for meat in NYC, a city known for expensive steakhouses. The head chef was chosen more for his model looks than for his experience and skill (as in, New York chefs were going, “Who?”). People associated with the restaurant’s backing were rubbing other people in the industry the wrong way. You don’t do that in New York. I found in hindsight that arrogance from Korean backers may have contributed to Im Jung Sik’s cold welcome in NYC.

This review from Chris Hansen at Serious Eats stated almost everything that I feared about Kristalbelli and everything I have feared about the way the Ajosshies-in-charge have been promoting Korean food in America.

I respect Chris. He knows his food, especially Korean. So I was looking forward to what he had to say. Here are some excerpts:

For all of the restaurant’s proposed swagger, the dining room is surprisingly sterile and bereft of decoration or chintz. Bricks walls cloaked in white paint combined with naked Edison light bulbs recall a turn of the century hospital.

Regarding what he noted was possibly the most expensive filet mignon on a New York menu:

In short: un-compelling. Indeed, it was intensely beefy and juicy at times. But without any seasoning, you get a completely sterile, pedestrian bite of beef.

If food is the new rock, then to draw a parallel, Kristalbelli is a new K-pop act. K-pop groups, such as ones produced by Mr. Park, tend to be projects rather than artists (don’t get me wrong, I love the stuff—an embarrassingly large K-pop collection on my iPod is proof). Members are handpicked, go through years of training (and sometimes surgery) to achieve perfect choreography and physique, and their debuts are precluded by massive PR campaigns. Similarly, in the attempt to create the perfect Korean BBQ restaurant, nothing was left to chance, discovery, or evolution. It’s a highly disciplined, beautified restaurant that may have removed smoke from the experience, but perhaps lost its soul along the way.

You should read the whole review before continuing.

It sounds exactly how I feared it would be. It committed the sins I was hoping to warn against–and do warn against in my upcoming co-written book to be published in Korea soon, such as the following:

One of the earlier complaints, especially from the likes of yangban blowhards like Cho Tae-kwon, was that people aren’t paying as much for Korean food as they are for, say, Japanese food. The promoters cared more about how much something cost on a menu than the product the customers were paying for. This is that classic nouveau riche concept of garishly spending wealth without caring about the quality. This is not restricted to Koreans. Anthony Bourdain has a chapter about the stupidity of the stupidly rich in his book, Medium Raw.

An event organizer in the U.S. who sometimes works with Korean food promoters once called me to have someone to bitch to.

“When Koreans come to the Korean booth, they just want to order the most expensive item on the menu, not caring what it is.”

It is a little hidden secret that in order to succeed as a restaurant in Seoul, especially if you’re trying to bill yourself as fine dining or trendy, you just max out your menu prices–especially the wine list–and gullible Seoulites will flock to your restaurant, leaving that permanent line outside your door. It’s the Garosu-gil model. That gullibility is gradually subsiding, but it looks like the Korean food promoters (including JYP) think that New Yorkers are that gullible. 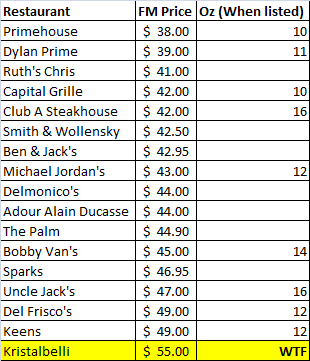 I mean seriously! You have one of the most expensive cuts of filet mignon in New York and you think it’s a great idea to slice and throw it on a nuclear hot pan with no seasoning? 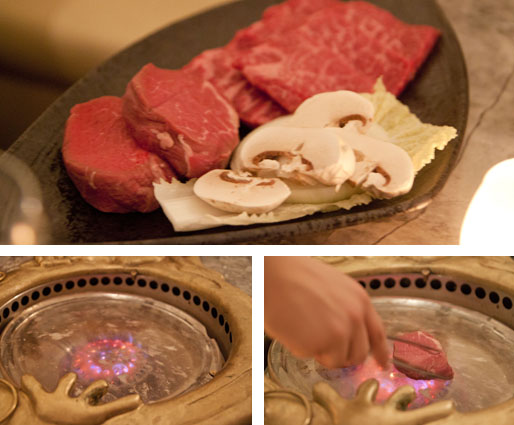 That shows how little you respect filet mignon and how little you respect New York diners. As the New York Times review for Jung Sik said, when you charge as much as the best restaurants in New York, your food had better match up. Rather than being the darling upscale Japanese alternative that Hansik promoters dream of, Korean food is getting a reputation for being a cartoonish rip-off.

A piece of “Premium Wagyu” (which I think doesn’t exist outside of a marketing intern’s imagination) fried in a pan at your table is–well, Benihana.

They’re expensive, and they look pretty. Yet they have little flavor. They have more in common with Japanese and Chinese court cuisine than what you’d normally find in Korea.

I think these yangban promoters truly look down on their own cuisine. No, I know that to be true. I have talked to these people in meetings and parties. They want budae jjigae to be excised from Lonely Planet. They don’t like the idea of restaurants where all the classes mingle in one room. They look down with disgust at their cuisine’s glorious peasant roots. I remember that amazing Korean tasting menu that the W Seoul did–and the pretentious Korean powerblogger who shrugged it off by saying it tasted “too Korean.”

A place like Kristalbelli takes all the fun and soul of a Korean BBQ out of the equation. One obvious question: how can there be BBQ without smoke?

If there’s no wood or charcoal and no grill, it’s fucking stir fry. It’s not BBQ.

Take away the BBQ from the BBQ. Remove the army of side dishes that is one of the big attractions of Korean food for foreigners. Make the atmosphere like a sterile hospital.

Who in their soju-addled brain thought that this was a good idea?

I thought that maybe my initial reactions were off. Maybe being away from the U.S. had made me out of touch with what Americans want. But this review from Serious Eats just confirms my instincts were not only right, they were uncannily precise, almost as if I freakin’ wrote the review (no, I have never even talked to Chris Hansen other than to ask permission to use his pics for this post, so quell that along with the other conspiracy theories people have about ZenKimchi).

It’s always been an old joke–how Korean industry’s business model is to copy others. Heck, look at the Apple vs. Samsung drama. Just look at all the knock-off restaurants and businesses in Seoul itself. Even the current K-pop trends started out as copies of late ’90s boy bands and Britney Spears. 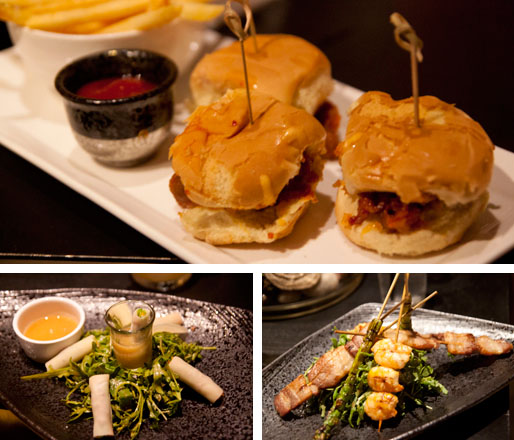 With Kristabelli, I’m specifically referring to the sliders, obviously ripped off of Michelin-starred Danji. Where Danji creates a balance of flavors with well prepared meat, it looks like Kristalbelli has approached theirs the same as Lotteria and many other burger joints in Seoul–slather it in sauce!

Where I come from the adage goes, “Sauce is used to cover up your mistakes.”

Go back and look at the pic of those sliders. If I paid $10 for those, I’d throw them at the wall.

At the heart of it, Chef Hooni Kim at Danji likes sliders. He grew up with them. So he makes sliders that he wants to eat. I bet the guys at Kristalbelli had never even heard of a slider. They’d never craved it after a night of drinking and a few puffs of a joint. They just wanted to copy it.

As a way off tangent, that’s also why I think a certain Ko-Mexican taco joint in Gangnam sucks big balls by making Korean tacos with sweet pickle relish–when compared to the creations at Vatos Urban Tacos. Vatos is run by passionate Korean-American guys who are cooking the foods they miss from home. That’s why they’re good. The guys at the Gangnam rip-off, who had barely any experience in this type of food, have actually said in the press that they saw the success of the Kogi taco truck in L.A. and wanted to copy it.

Anyone who’s worked as an English teacher in Korea or has done business in Korea will note immediately how the people they deal with care more about how something looks than how something is. This goes for the preference for gaudy royal court dishes, western wedding ceremonies with the cardboard wedding cakes and the pouring of the champagne fountain (which nobody drinks because the glasses are glued to each other), and generally how business is done. As in North Korea, it’s all about the illusion.

Kristalbelli has cared a lot about how the place looks. The review had better things to say about the toilet paper than it did about the food.

One of the most reliable rules in Seoul non-hotel restaurants is that the prettier it is the more disappointing the food. They’ve spent all their money on the design with the food being an afterthought.

Regarding Kristalbelli, you shouldn’t trust celebrity-owned restaurants. They don’t have good track records–Korean or not.

So, yeah, I’m being harsh on a restaurant I still haven’t been to. Yet I can’t resist pointing out examples in the wild that prove over and over again that I didn’t pull these little rules out of my forbidden cavity. They come from years of sharp constant observation.

The pretentious gimmicky overcharging tricks don’t work outside of Seoul. They barely work in Seoul.

I have a feeling we’re in for more entertainment–but not the kind that JYP intended.

*Despite the restaurant, I like JYP as a performer, and he seems like a generally great guy, aside from his belief in Jews-run-the-world conspiracies.