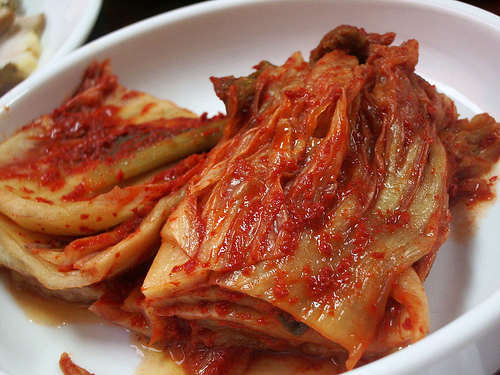 Could this kill you?

Anyone who has been in Korea for a while notices that rules and laws tend to be suggestions. For the longtimers, we have a love-hate attitude towards this. Yes, the taxi may run the red light, but doing so gets you to your destination faster. Things get done quickly in Korea. Sometimes there are flaws. But the other extreme is a place like New York City, where you can’t pick your nose in your bedroom without a permit.

This lax attitude towards regulations runs in the food industry. Open faced table grills fed by men running around with buckets of red hot charcoal likely run against health and safety codes in western cities. Old ladies peel vegetables and brine cabbage for kimchi on the floor. Large cauldrons of boiling soup billow steam as they sit on the sidewalk. That’s the colorful organic side of Korea I absolutely fell in love with.

Yet the “rules are for everyone else” attitude causes real problems. A while back there was the scandal that many cheap restaurants in Korea were recycling unused side dishes by giving them back out to new patrons. The government is still trying to crack down on this practice.

This attitude can truly kill all the Korean food globalization efforts. Two articles came out lately that illustrate this. This past spring you may remember that diners at Korean restaurants in Japan were poisoned and killed by the raw beef used in Yukhui. This month the Japanese government laid out strict new regulations on serving raw meat in restaurants that require them to cook the meat to 60-degrees C and cut off one centimeter around the edge while also purchasing special equipment. Naturally, restaurateurs are complaining that doing so will waste half the beef and make it more expensive.

The lesson: one restaurant’s lack of care has punched the entire Korean restaurant community in Japan in the nuts.

The other article goes to Canada. The Canadian government is warning against buying some brands of South Korea imported kimchi because they failed to label ingredients that could cause allergic reactions and death amongst some people, like shellfish. We and others have warned about this before. There is little concern for people with food allergies and other dietary restrictions. Vegetarians get lied to that the side dish they’re eating has no animal products, even though anchovies and dried shrimp were used in its preparation. A person with a peanut allergy requests that a dish be served without peanuts. The dish comes with peanuts on top. When the diner complains, the server just says, “Why can’t you eat it how we make it?”

Both of those examples were not made up.

This boils down to lack of foresight, non-consideration of target markets, and pure arrogance. These articles were in overseas papers, and I haven’t gotten a whiff of them making it to Korea. I could be wrong. But I do hope the local media picks up on this because this long standing habit of ignoring inconvenient rules will kill any chance of people ever eating Korean food. Korean cuisine is just getting over the racist stereotype of eating dog every meal. Let’s not create a new one that it’s dirty and dangerous to eat.