A Tale of Two Tongues: Pairing Wine with Hansik

Asian cuisine, and Korean food in particular, is notoriously difficult to pair with wine. Even wine-lovers agree that beer is easier on the palate, as it combats the ever-present chilli peppers and compliments the potent flavours without neutralising them. What’s more, wine doesn’t play a large role in Korean dining culture. Even locally produced wines (such as Majuang) are not always on offer in restaurants, and are usually enjoyed alone or with snacks. Most restaurants that serve Korean food don’t even keep wine glasses. That’s not to say that Koreans don’t drink wine. Western restaurants offer wine and wine bars are now cropping up in every city. At first glance, it seems that people either go out for western or eastern food and drink, and never the two shall meet.

With a closer look, however, it’s clear that the wine scene in South Korea is small, but thriving. There is also a growing global interest in pairing wine and hansik (Korean food), particularly in the US – where the large Korean/American community has fostered the spread of Korean restaurants. In South Korea itself, there are some wine-pairing pioneers that hope to educate wine connoisseurs about hansik’s potential as a great companion to some of the world’s favourite wines.

With this in mind, I decided to try my hand at pairing a new love – hansik – with an old – red wine. I thought it best to start modestly, following the advice of those who had gone before. Wine experts usually pair hansik with an off-dry Riesling or a Pinot Noir, the latter of which is more versatile than most reds. Picking up a 2009 Agustinos Pinot Noir Reserva Privada, I headed off to a restaurant in Daegu that specialises in Soondubu Jjigae.

As with most Asian food, hansik is usually shared. The table ordered four varieties of the jjigae: kimchi jjigae, mandu jjigae, beegi jjigae (with okara) and kopjang jjigae (with chitterlings). If pairing a wine with four dishes wasn’t difficult enough, Korean meals are always served with side dishes known as banchan. Our table was adorned with ramekins that offered intense flavours, as most banchan are very salty, sweet or spicy, and many are fermented, such as the ubiquitous kimchi. 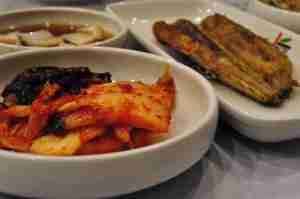 While awaiting the jjigae, we opened the wine. The Pinot’s nose offered sweet aromas of vanilla and cherry, and so I was surprised when it tasted thin, albeit with a pleasant, slightly astringent, finish. My South African palate was longing for the Hermitage/Cinsault in the Pinotage hybrid, but I reserved final judgment until the end of the meal. 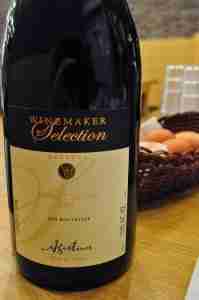 A spoonful of kimchi jjigae blasted over my tongue and erased all memory of the banchan or the wine. Uh-oh, I thought. This experiment may fail. The next sip of wine only confirmed these fears, as the tannins only enhanced the gochujang (a chili-pepper paste omnipresent in hansik). I felt like there was a battle for dominance being waged on my taste buds. Perhaps I had chosen the wrong wine?

Thankfully, the beeji jjigae came to the rescue. The dubu was smoothly mixed with okara, producing a nutty and creamy flavour which toned down the gochujang and yet retained a strong edge. After a spoon of this, I sipped the wine again. This was a far better pairing: the wine wasn’t lost, nor did it eclipse the jjigae. With a bite of japchae (a noodle dish) to cleanse my palate, I was ready to pair it with a new dish. The wine stood up to the mandu jjigae beautifully, and I began to appreciate the Pinot’s versatility. Overall, the wine’s tannins boosted the spice of the jjigaes and added to the warmth of the meal, which makes it a great pairing for winter. I wouldn’t recommend this pairing in the humid Korean summer, but it was a hearty combination in the icy January weather. 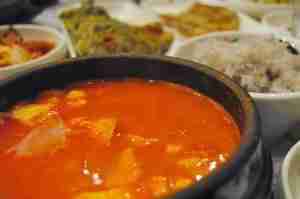 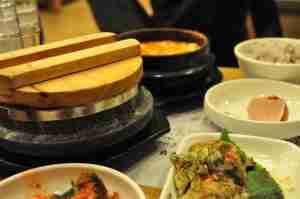 One of the best things about Asian food is that there is always a variety of combinations available on any given table. You are never stuck with a single pairing of tastes and textures, and can always cleanse your palate with a bite of mulkimchi (a milder, watery kimchi) or danmuji (pickled radish) and start again. A host of variables awaits the diner, who is free to customise their meal and select flavours that suit the wine. Who says Korean food doesn’t like wine? Next time, I’ll ditch the Pinot and get more adventurous. Hansik can handle it, of that I’m sure.

For more information on Korean food and wine pairing, see: